From Infogalactic: the planetary knowledge core
Jump to: navigation, search
For other people named Bernard Drake, see Bernard Drake (disambiguation).
145px
180px
Right: Monumental brass in Filleigh Church, North Devon, depicting Sir Bernard Drake (d. 1586), who erected the monument to which it was originally affixed in memory of his brother-in-law, Richard Fortescue (d. 1570). The arms of Drake of Ash are shown in the dexter escutcheon, in a mutilated condition: Argent, a wyvern wings displayed and tail nowed gules. The sinister escutcheon shows the quarterings of the arms of Drake's wife, Gertrude Fortescue. Left drawing of reconstructed brass 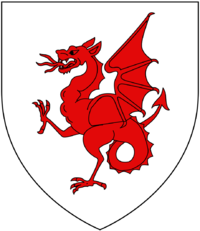 He was the eldest son of John Drake, gentleman, of Ash in the parish of Musbury, Devon, and his wife, Amy, daughter of Sir Roger Grenville. Richard Drake was his brother. He was a first cousin of Roger Grenville, who was captain of the Mary Rose when it sank in 1545 and father of Sir Richard Grenville, the Elizabethan explorer. Sir Bernard's aunt, Alice Drake, married Walter Raleigh and became the step-mother of Sir Walter Raleigh, the explorer and poet. Bernard Drake was a second cousin of William Pole, the antiquary. Bernard was possibly also a distant kinsman of Sir Francis Drake, the circumnavigator; the existence of such a kinship was a controversy even during their lifetimes. Bernard succeeded his father in 1558.

His life was uneventful until he became associated with Sir Humphrey Gilbert, perhaps through his relatives Richard Grenville and Walter Raleigh. Thus Bernard was first attracted to American ventures and, in December, 1582, he was among the adventurers in a corporation established by Gilbert to exploit his royal grant in North America, although Drake’s involvement seems to have been limited to his investment; Drake undertook to lead a party of adventurers to settle whatever part of North America Gilbert had sold him on paper. He did not participate in any overseas ventures, however, so far as is known, until 1585, by which time he had joined with Raleigh and Humphrey Gilbert’s brother, John, in activities connected with the Roanoke Island Colony, in present-day North Carolina. When, on 26 May, the Spanish government placed an embargo on English shipping in Bilbao harbour, Raleigh commissioned Drake to warn English fishermen in Newfoundland of the embargo and to seize Spanish shipping. Dropping plans for a privateering voyage to the West Indies en route for Roanoke, where a colony was to be settled by Sir Richard Grenville who had left Plymouth in April, Drake left for Newfoundland in July.

"The voyage was both successful and profitable, beginning with the capture of a Portuguese ship laden with Brazilian sugar. Once at Newfoundland, Drake alerted the fishermen to the danger of heading directly to markets in Spain and captured both Spanish and Portuguese fishing ships. Sending some of his ships back to England with the prizes, he joined forces with another of Raleigh’s associates, George Raymond, and sailed for the Azores. There they seized Spanish ships coming from the West Indies with cargoes of sugar, wine, and ivory, and a French ship carrying some gold. In all they probably took more than twenty ships, though not all reached England safely. Estimates of the value of the prizes vary but the voyage likely returned a profit of at least 600 per cent. As their share, Drake and his eldest son, John, were given four of the most valuable ships by Raleigh and Sir John Gilbert. Strategically the raid had the result of depriving the Spanish navy and merchant marine of 60,000 quintals of the dried fish so important to the victualling of ocean-going ships. In a precautionary move, the following year, the Spanish government forbade ships to sail to Newfoundland. Thereafter Spanish fishing ships tended to frequent the island’s south coast, away from the English area of dominance. The Portuguese fishery seems never to have fully recovered from Drake’s attack."[1]

At an unknown date, Drake married Gertrude Fortescue, daughter of Bartholomew Fortescue, of Filleigh, North Devon, and sister of Richard Fortescue (d. 1570) in whose memory he erected a monumental brass in Filleigh Church, by Ellen, daughter of Morris Moore and Cecily Bonville (a granddaughter of Lord Bonville); they had six children:

On 9 January 1586, Bernard Drake was knighted by Elizabeth I at Greenwich in recognition of his success. A couple of months later, the surviving Portuguese prisoners, whom Drake had had imprisoned in Exeter, were put on trial, the charge perhaps being mutiny. Those who lived came to trial at the notorious Lent Black Assize of Exeter from 14 March 1586 held at Exeter Castle. The prisoners were so weak and ill that Drake was reprimanded by the judge, Edward Flowerdew (died 1586), Baron of the Exchequer, for his neglect. Within little more than three weeks, the judge, eleven of the twelve jurors and eight justices of the peace, who had been exposed to the prisoners, died from an infection caught from the Portuguese. Ill himself, Drake tried to reach home but died in Crediton on 10 April 1586, and was buried two days later. For more than a year an epidemic of what was apparently typhus raged in Devonshire. Drake’s son, John, inherited Ashe as well as the profits of the Newfoundland voyage.

A monument was erected by his son, John, in St. Michael's Church, Musbury, which shows three generations of family patriarchs at prayer, each kneeling with his wife. The inscription under the middle couple, being Sir Bernard and his wife, is as follows:[2]

"Heer is the monument of Sr Barnard Drake Kt. who had to wife Dame Garthrud the daughter of Bartholomew Fortescue of Filly Esqr. by whom hee had three sonnes and thre daughters where of whear five living at his death viz John, Hugh, Marie, Margaret and Helen. He died the Xth of April 1586 and Dame Garthrud his wief was here bured the XIIth of Februarie 1601 unto the memorie of whome John Drake Esqr. his sonne hath set this monument Anno 1611"

The armorials of the ancient family of Drake of Ash, Argent, a wyvern gules, can be seen on the monument to Sir Bernard erected at Musbury Church in 1611. Sir Francis Drake, the great sea-captain, but no relation to Sir Bernard, when knighted by Queen Elizabeth in 1581 assumed the arms of Drake of Ash, which action was contested by Sir Bernard, as the anecdote recorded by John Swete (d. 1821), noted by him from John Prince's "Worthies of Devon" (1697), relates:[3]

"By the assumption of the arms of the family of Ash, Sir Francis Drake incurr'd the displeasure of Sir Bernard, insomuch that Sir Francis receiv'd from the indignant knight a box on the ear, and that even within the precinct of the court. The Queen was of too haughty a spirit to permit such an outrage to pass unpunish'd and not only reprehended Sir Bernard but as a check to the pride of the one and as what was due to the merit of the other, bestow'd on Sir Francis a new coat of arms allusive to his having circumnavigated the world: Diamond, a fess wavy between two pole stars Arctic and Antarctic pearl and a crest: A ship on a globe under ruff held by a cable rope with a hand out of the clouds in the rigging whereof is hung up by the heels a wivern gules, tha arms of Sir Bernard, which indignity the knight bore as well as he might, observing that though Her Majesty might give Sir Francis a nobler, yet she could not give an antienter coat than his."

Sir Bernard said to Sir Francis
"You're making a grave mistake
If now you're a knight
You think you've a right
To the wyvern gules of Drake."

Sir Francis said to Sir Bernard
"Your wyvern gules you can keep
At the Queen's behest
I'll have such a crest
As will make your arms look cheap."

And upon a globe on his helmet
The good ship Golden Hind show,
With a dragon to fame
El Draco's name"
And the heralds made it so.

Sir Francis said "Look, Sir Bernard!"
And Sir Bernard proudly spake
"Grand arms you've got
I allow but they're not
The ancient wyvern of Drake."

Sir Francis, regardless of Sir Bernard's protest, nevertheless proceeded to adopt the arms of Drake of Ash, as he sealed several documents with the wyvern arms quartered with the new coat. A surviving portrait of Sir Francis, probably contemporary, displays the wyvern in the first and fourth quarters. In 1643 the daughter of John Drake of Ash married Sir Winston Churchill, and their son, John Churchill, 1st Duke of Marlborough, was born at Ash House. The Churchill arms use as supporters Two wyverns wings elevated gules,[5] derived from the arms of their Drake ancestors.[6]

Sir Bernard Drake was an 11th-generation descendant of Edward I through his great-great-grandfather, Thomas Grenville, of Stowe, High Sheriff of Gloucestershire.[7]