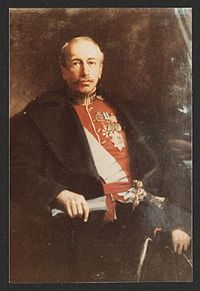 Castletown was the only son of John FitzPatrick, 1st Baron Castletown, and his wife Augusta Mary (née Douglas), and was educated at Eton and Brasenose College, Oxford.[1]

He was appointed High Sheriff of Queen's County in 1876. He served in the Life Guards and fought in Egypt in 1882. He also sat as Member of Parliament for Portarlington from 1880 to 1883, when he succeeded his father in the barony and entered the House of Lords. In early 1902 he took part in a special diplomatic mission to promote British interests in Morocco.[2] He served at Colonel in the 4th Battalion of the Leinster Regiment (Queen's County Militia) by 1903 and was the first to outfit them with Irish bagpipiers.[3]

Castletown was later Chancellor of the Royal University of Ireland between 1906 and 1910.

Theft of the Irish Crown Jewels

The Irish Crown Jewels were discovered missing on 6 July 1907, four days before the start of a visit to the Irish International Exhibition by King Edward VII and Queen Alexandra, at which was planned the investiture of Bernard FitzPatrick, 2nd Baron Castletown into the Order.[4] The theft is reported to have angered the King, but the visit went ahead.[5] However, the investiture ceremony was cancelled. Also stolen were the collars of five Knight Members of the Order. The following year in 1908 he was made a Knight of the Order of St Patrick and admitted to the Irish Privy Council. His banner still hangs in St. Patrick's Hall in Dublin Castle.[6]

Lord Castletown married the Hon. Emily Ursula Clare St Leger, daughter of the 4th Viscount Doneraile, in 1874. The marriage was childless. He died on 29 May 1937 at Granston Manor, aged 87, when the barony became extinct.[7]

Castletown was particularly interested in Celtic heritage, and was among the founders of the Celtic Association, an organisation concerned with the preservation of the languages, literature, music, dress and customs of the Celtic peoples. In 1900, the Celtic Association was set up in Dublin with Castletown as president and E.E. Fournier as secretary. The Celtic Association is mainly remembered for the three Pan-Celtic Congresses it organized: the first in Dublib in 1901, the second in Caernarfon in 1904, and the last in Edinburgh in 1907.[8] The first Congress had been scheduled for 1900, but had to be postponed when Castletown was called to service in the Boer War. The Association was not without its detractors, in part because many of the Irish sympathized with the Boers.

Originally made up of representatives from Ireland, Scotland, Wales, Brittany, and the Isle of Man; Cornwall was added in 1904.