Bernard William Rogers (July 16, 1921 – October 27, 2008) was a United States Army general who served as the Chief of Staff of the U.S. Army, and later as NATO's Supreme Allied Commander, Europe and Commander in Chief, United States European Command.

Rogers was born in Fairview, Kansas on July 16, 1921.[1] He spent a year at Kansas State University,[2] where he was a member of Phi Delta Theta fraternity, before receiving an appointment to the United States Military Academy in 1940, where he was First Captain of the Corps of Cadets.[3] He graduated in June 1943 as Cadet First Captain (first in his class), and was commissioned a second lieutenant of Infantry. He was assigned to the 275th Infantry Regiment,[1] 70th Infantry Division,[3] and attended the officer basic course at the U.S. Army Infantry School at Fort Benning in preparation for a World War II combat assignment.

Rogers was promoted to temporary first lieutenant in December 1943. Rather than the combat assignment he expected, Rogers' contribution to the war effort was his return to West Point to teach. He provided instruction in economics, government, and history from 1944 to 1945, and received promotion to temporary captain in February 1945. From 1945 to 1947 he served as aide to the High Commissioner to Austria, General Mark Clark, and the commander of the Sixth Army.

In 1947 he attended Oxford University as a Rhodes Scholar, graduating with a Bachelor of Arts in Philosophy, Politics and Economics in 1950 (he was later awarded an MA in the same subject). During his time at Oxford he was promoted to permanent captain.[1]

Following graduation from Oxford, Rogers was aide to the chief of Army Field Forces from 1950 from 1951, being promoted to temporary major in July 1951. He graduated from the Infantry School advanced course in 1952.

Rogers was then deployed to the Korean War where he commanded the 3d Battalion, 9th Infantry from 1952 to 1953, being promoted to temporary lieutenant colonel in August 1953.

Rogers' next assignment was as aide to the commander in chief and staff intelligence officer of the United Nations and Far East Commands from 1953 to 1954. Rogers returned stateside and graduated from the Command and General Staff College at Fort Leavenworth in 1955.

He next commanded the 1st Battalion, 23d Infantry from 1955 to 1956, the served in the Coordination Division, Office of the Chief of Staff from 1956 to 1958. This was followed by duty as executive and senior aide to the chief of staff from 1958 to 1959 and promotion to permanent major January 1959 and temporary colonel in September 1959.

He was selected to attend the Army War College and graduated in 1960, going on to command the 1st Battle Group, 19th Infantry, 24th Infantry Division in Europe from 1960 to 1961. His next assignment in the division was as chief of staff and he also served as chief of the Troop Operation Branch, Operations Division, United States Army, Europe from 1961 to 1962. Rogers next duty was as military assistant and executive officer to the chairman of the Joint Chiefs of Staff, General Maxwell Taylor, from 1962 to 1966.[1]

As assistant commander of the First Infantry Division in Vietnam in 1966 and 1967, General Rogers was awarded the Distinguished Service Cross—the Army's highest award for valor after the Medal of Honor—for leading a successful counterattack against a Vietcong raid on a South Vietnamese special forces camp. He rallied troops on the ground and personally scouted enemy positions from a low-flying helicopter under heavy fire.

After returning from Vietnam, Rogers served two years as Commandant of the Corps of Cadets at West Point.

Rogers was one of a select few senior officers chosen for division command, and was assigned commanding officer of the 5th Infantry Division (Mechanized), and he also commanded Fort Carson, Colorado, from 1969 to 1970.

At a time of falling morale, he made sweeping changes in the daily routine of soldiers by abolishing kitchen duty (KP), reveille, roll call and Friday night "GI parties", in which soldiers scrubbed the barracks for Saturday inspections. Rogers established councils for junior officers, enlisted men and racial minorities to express their concerns and set up a Greenwich Village-style coffeehouse, complete with folk singers. Old-line officers were aghast, but re-enlistments soared, and General Rogers became known as one of the brightest thinkers in the Army.

Rogers was promoted to temporary major general in February 1970 and permanent brigadier general in August 1971.

Rogers was promoted to temporary lieutenant general in November 1972, and permanent major general in June 1973 while serving as deputy chief of staff for personnel of the Army, from 1972 to 1974. He was promoted to temporary four-star General in November 1974, and was chosen to command the United States Army Forces Command at Fort McPherson from 1974 to 1976.

Following this assignment he was selected to be Chief of Staff of the United States Army, a post he held from October 1, 1976, until June 21, 1979. Some highlights of his tenure include supervising the Army's move to a 24-division, all-component force; establishing priorities for near-term readiness, midterm modernization, and long-term sustainability; establishing a program to enhance the quality of life of Army personnel; and suggesting a limited draft to fill the Individual Ready Reserve.

He continued the reforms he began as a division commander as Army chief of staff from 1976 to 1979, improving training programs and developing plans for a modern "quick-strike" force. He also took steps to make the Army more friendly toward women and minorities, calling on commanders to "eliminate any discriminatory handling of soldiers."

Rogers was responsible for starting the Army's renaissance after falling into a state of low morale and readiness following the Vietnam War. His innovations and reforms were continued under his successor, General Edward C. Meyer.

Rogers was appointed by President Jimmy Carter as Supreme Allied Commander Europe (SACEUR), North Atlantic Treaty Organization in June 1979 and, concomitantly, as Commander in Chief of United States European Command. He assumed his duties as SACEUR on July 1, 1979.[1] 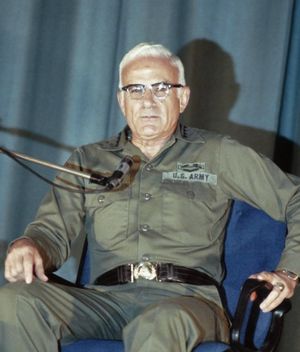 In his role as SACEUR, Rogers would have been in command of all NATO forces in the event of an attack by the Soviet led Warsaw Pact on Western Europe. His emphasis on combat readiness led some soldiers to comment that there were two armies - one in Europe ready for war and one in the United States that was not.[citation needed]

Despite his charmed career, Rogers was eager to leave the bureaucratic labyrinth of the Pentagon behind when he assumed his NATO post in Belgium.

When the Reagan administration signed a treaty with the Soviet Union requiring each side to withdraw intermediate-range missiles from Europe, General Rogers called the agreement "foolish." He said the Warsaw Pact's superiority in foot soldiers and conventional weapons left NATO forces at risk of being quickly overrun.

His stance drew a pointed rebuke in 1987 from Secretary of State George P. Shultz, who called the general's comments "way out of line." General Rogers soon retired.

He served as SACEUR for eight years - longer than any other NATO Supreme Allied Commander. He retired from the Army after 47 years of service in June 1987. Very few individuals have had a longer career in the United States Armed Forces.

General Rogers, who spent 47 years in uniform, had an unusual combination of talents as a combat commander, intellectual and statesman. While addressing a NATO conference in 1979 the former Rhodes scholar said, "One cannot help but to be impressed – perhaps depressed is the better word – by the folly, futility and waste of war as a means of resolving man's problems."

Rogers could be "suave and poised and intimidating", Major General Dewitt C. Smith once said, but he was also known to break into song on occasion, with Frank Sinatra's "My Way" a particular favorite.

After his retirement in 1987, Rogers was a director of the Council on Foreign Relations and the Atlantic Council of the United States. He served on the boards of the USO and the Association of the United States Army and was a consultant and director to several companies, including Coca-Cola and General Dynamics.

Rogers married Ann Ellen Jones in 1944.[1] He was an Honorary Director of The Atlantic Council of the United States,[5] and sat on the Association of the United States Army's Council of Trustees.[6] He was also a supporter of the Comprehensive Test Ban Treaty.[7] He was an Honorary Fellow of University College, Oxford University, a member of the Council on Foreign Relations, of Phi Delta Theta Fraternity, and a Patron Councilor of the Atlantic Council of the U.S.[8]

Other honors and awards he has received include: