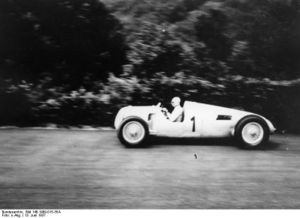 Bernd Rosemeyer at the Nürburgring in 1937.

His father owned a garage and repair shop where young Rosemeyer worked on motorcycles and cars. Having started by racing motorbikes, Rosemeyer became a member of the Auto Union racing team with hardly any experience in racing cars. This was later considered a benefit as he was not yet used to the handling of traditional layout race cars. The Ferdinand Porsche-designed mid-engined Silver Arrows of Auto Union were fast, but hard to drive, and only he, Tazio Nuvolari and to a lesser extent Hans Stuck truly mastered the 500 bhp (370 kW) machines. Rosemeyer was also a very skilled mechanic, so, like Hermann Lang of Mercedes, he was able to give good technical feedback to Dr. Porsche and development engineer Eberhorst to further develop the Auto Union cars further and set his cars up for races to make them quicker and easier to drive.

In only his second ever Grand Prix, at the daunting Nürburgring, Rosemeyer took the lead from the great Rudolf Caracciola and was almost in sight of the finish line when he missed a gear and was overtaken. However in subsequent years he made up for this mistake by winning three consecutive races at the Nürburgring, one famously in thick fog. Later in 1935 he won his first Grand Prix at the Brno Masaryk Circuit in Czechoslovakia.

Whilst on the podium he was introduced to the famous aviator Elly Beinhorn. Their celebrity relationship was too good an opportunity to miss for the Nazi Party and Heinrich Himmler chose to make him a member of the SS, an 'honour' he would have been unwise to refuse. All German drivers were required to join the National Socialist Motor Corps, but Rosemeyer allegedly got away with never wearing a uniform.

Several sensational Grand Prix motor racing victories in 1936 and 1937 (also in the Vanderbilt Cup in the USA) made him popular not only in Germany. He won the European driving championship in 1936.

His marriage to Beinhorn added even more celebrity hype. It also made it possible for him to learn to fly a private plane. Before a testing session, he once used a now defunct airfield next to the Flugplatz section of the Nürburgring as a landing strip, and rolled his plane to the pits via the race track - in opposite direction.

His son Bernd, Jr. was born in November 1937, only ten weeks before his death.

Rosemeyer considered 13 to be his lucky number. He was married on 13 July 1936. 13 days later he won the German Grand Prix at the Nürburgring. His last Nürburgring victory came on 13 June 1937. His last race victory came at his 13th start of the 1937 season at Donington Park. 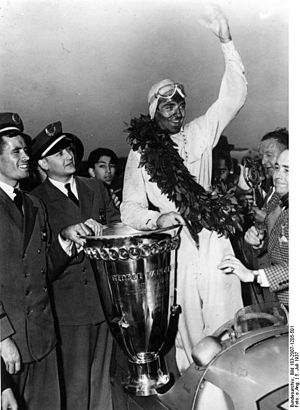 Bernd Rosemeyer with the Vanderbilt Cup (1937)

Rosemeyer was killed during a land speed record attempt on the Autobahn between Frankfurt and Darmstadt on 28 January 1938.

Competing for the record against Rudolf Caracciola, Rosemeyer went out later in the day in his Auto Union streamliner, setting a new class record of 432 km/h (268 mph).[citation needed] In an effort to raise the record still higher, despite a report that wind was picking up, Rosemeyer took the streamliner again. After two preliminary runs he was on his third and final attempt at 11:47, when the car suddenly went out of control. Whether caught by a gust of wind or by an unforeseen aerodynamic effect, it skidded to the left onto the median, then right and off the highway, where it went airborne and collided with a bridge embankment. Rosemeyer was thrown out of the car as it somersaulted through the air; he died at the roadside.[1]

The Rosemeyer memorial is south of Frankfurt at the Rosemeyer layby (German: "Bernd-Rosemeyer-Parkplatz") on the southbound side of A5 motorway at kilometer marker 508. At the south end of the layby a footpath leads west into the forest, where the memorial is located at Lua error in Module:Coordinates at line 668: callParserFunction: function "#coordinates" was not found..

Audi honoured the 100th anniversary of Rosemeyer's birth by placing a wreath at the memorial.[2]

Audi built a concept car, the Audi Rosemeyer, which combined elements of modern design with styling strongly resembling the former Auto Unions "Silver Arrows" Grand Prix racers, namely their 16-cylinder car driven by Rosemeyer, after which the car is named.

There is also a bronze memorial situated next to the entrance to the Donington Park Museum in Leicestershire.

In his birthplace of Lingen (Ems), Bahnhofstrasse, where the racer grew up, was renamed in his honor as "Bernd-Rosemeyer-Strasse". In addition, the city is the home of Motorsport Club "MSC Bernd Rosemeyer Lingen e.V. im ADAC", founded in 1964. The namesake "Autohaus Rosemeyer" at Lindenstrasse 7 closed its doors on 30 November 2003.