Bernd Schneider (born 20 July 1964 in St. Ingbert) is a racing driver from Germany.

The next few years, Schneider would race in the various Formula Ford series in Germany and elsewhere in Europe. In 1986, he joined the German Formula Three circuit, winning the title the following year in 1987. This brought him to the attention of Erich Zakowski, who signed Schneider to drive for his Formula One team Zakspeed in 1988 and 1989. However, the small German-based squad did little to make an impression on the F1 circuit and Schneider only able to qualify for nine races out of the 32 he entered with the team (7 out of 16 with the turbo powered car in 1988 and only twice out of 16 attempts did he pre-qualify and actually qualify for a race in 1989). Schneider also briefly drove for Arrows, before leaving single seaters and racing Porsche sports cars in the early 1990s for Joest Racing, in the World Sportscar Championship and races such as the 24 Hours of Le Mans. 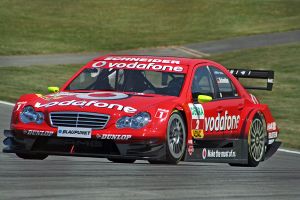 In 1992, Schneider moved to the DTM (German Touring Car Championship), driving for AMG-Mercedes. Finishing third his first season, he has since been a regular Mercedes driver. In 1995, he won his first DTM championship, piloting an AMG C-Class.

In the years of the DTM's absence, Schneider raced the works Mercedes CLK GTR cars in the FIA GT Championship, winning the title in 1997 after winning six races. In 1998, now with the CLK-LM variant, although winning five races, he lost the title to teammates Klaus Ludwig and Ricardo Zonta. He was also a Mercedes works driver in the 24 Hours of Le Mans in 1998 and 1999. 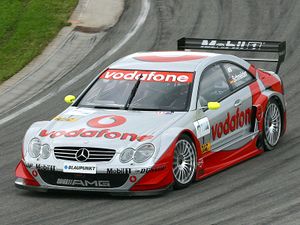 Bernd Schneider at the Sachsenring in 2002

The DTM returned in 2000 with silhouette bodies and V8 engines, and Schneider took the championship crown three of the first four years (2000, 2001, and 2003) in an AMG CLK-Class; he was runner up in 2002. Still driving for AMG, Schneider has won a record four championships; in 2005, he was teammates with (among others) former F1 champion Mika Häkkinen, and in 2006 won his fifth championship title.

It was announced on 21 October 2008 that Schneider will retire from racing at the conclusion of the 2008 season.[1]

In recent years, Schneider has returned from retirement to take part in several endurance races. In 2013 he raced in and won the 24 Hours of Dubai, the Bathurst 12 Hour, the 24 Hours Nürburgring and the Spa 24 Hours in a Mercedes-Benz SLS AMG.

Schneider currently races in the Pro-Am class of the Blancpain Sprint Series in the #70 GT Russian Team Viatti Mercedes.[2]

Schneider lives in Monte Carlo with his girlfriend Svenja and their daughter Lilly-Sophie. He also has children Lisa-Marie and Luca Maximilian with his ex-wife Nicole. Schneider still enjoys karting.

1 - Shanghai was a non-championship round.