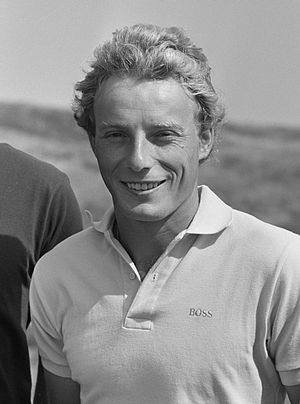 Bernhard Langer at an international tournament in Noordwijk, the Netherlands, in 1985 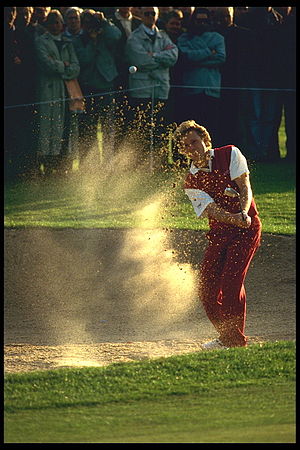 Langer was born in the village of Anhausen, which today is a part of Diedorf municipality, near Augsburg, Bavaria, Germany. He turned professional in 1972 and has won many events in Europe and the United States, including The Masters in 1985 and 1993. He was the inaugural World Number 1 when the Official World Golf Rankings were introduced in 1986. He was elected to the World Golf Hall of Fame in 2001 (but deferred his induction until 2002).[2] He ranks second in career wins on the European Tour (40) and has also played regularly on the U.S. based PGA Tour, especially in the late 1980s and since 2000. He finished in a tie for fifth at The Open Championship the month before he turned 48, and regained a ranking in the top 100 three months before he turned 50. Along with Gary Player, David Graham, and Hale Irwin, Langer is one of only four players to have won official tournaments on all six continents on which golf is played. He played on 10 Ryder Cup teams (1981, 1983, 1985, 1987, 1989, 1991, 1993, 1995, 1997, 2002) and was the non-playing captain of the victorious European team in 2004.

Langer has battled the yips, having a strong tendency to flinch or twitch during putting.[3] He has changed his putter grip numerous times in an attempt to cure the problem.[4] In the 1991 Ryder Cup, Langer missed a five-foot putt that would have tied the Ryder Cup and allowed the European team to retain the trophy.

Langer has been married to his American wife Vikki Carol since 1984. They have four children: Jackie, Stefan, Christina, and Jason. They maintain homes in Langer's birthplace of Anhausen and in Boca Raton, Florida. Langer is known to be a devout Christian.[5]

In 2006, in recognition of his contribution to the sport of golf, Langer was appointed as an honorary Officer of the Most Excellent Order of the British Empire (OBE).[6]

In 2015, Langer became the first player since Arnold Palmer (1984–85) to win the Constellation Senior Players Championship in back-to-back years.

* Langer and Montgomerie agreed to share the 2002 Volvo Masters Andalucia after failing light caused play to halt after 2 holes of a playoff.

* Tournament shortened to 36 holes due to rain.

* The U.S. Senior Open is an unofficial money event on the European Seniors Tour.

Note: The Senior Open Championship and the U.S. Senior Open are both co-sanctioned events by the Champions Tour and European Seniors Tour.

DNP = Did not play
WD = Withdrew
DQ = Disqualified
CUT = missed the half way cut
"T" indicates a tie for a place.
Green background for wins. Yellow background for top-10

Results are not in chronological order before 2014.