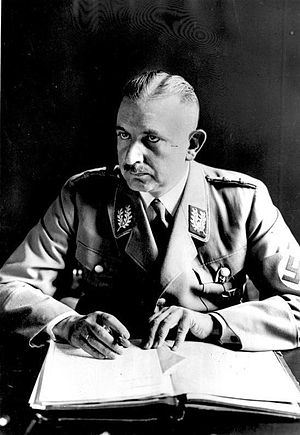 Bernhard Rust (30 September 1883 in Hanover – 8 May 1945) was Minister of Science, Education and National Culture (Reichserziehungsminister) in Nazi Germany.[1] A combination of school administrator and zealous Nazi, he issued decrees, often bizarre, at every level of the German educational system to immerse German youth in the National Socialist philosophy.

Rust was born in Hannover, and obtained a doctorate in German philology and philosophy. After passing the state teaching examination with the grade "gut" (i.e. good)[2] in 1908, he became a high school teacher at Hannover's Ratsgymnasium, then served in the army during World War I. He reached the rank of lieutenant and was awarded the Iron Cross for bravery.[3]

Rust joined the NSDAP in 1922, and eventually became the Gauleiter for the Gau of Süd-Hannover-Braunschweig. In 1930, he was elected to the Reichstag. When Hitler became Chancellor in 1933, Rust was appointed as the Prussian Minister for Cultural Affairs. On 1 June 1934, he was selected as Minister of Science, Education and National Culture (Reichsminister für Wissenschaft, Erziehung und Volksbildung), and set about to reshape the German educational system to conform to his ideals of National Socialism. Considered by many to be mentally unstable, Rust would spuriously create new regulations and then repeal them just as quickly. One noted example was in 1935, when he changed the traditional six-day school week to five days, with Saturday to be "Reich's Youth Day" when children in the Hitler Youth and the League of German Girls would be out of school for study and testing. He then ordered the creation of a "rolling week", with six days for study, followed by the "youth day" and a rest day, in 8-day periods. Thus, a rolling week starting on Monday would end with rest on the following Monday; the next rolling week would start on Tuesday and end 8 days later on the next Tuesday. When the 8-day week proved unworkable, Rust went back to the former system.[4]

It was Rust who, in 1933, issued a rule that students and teachers should greet each other with the Nazi salute "as a symbol of the new Germany". He added his opinion that it was "expected of every German" regardless of membership in the party.[5] Rust was instrumental in purging German universities of Jews and others regarded as enemies of the State, most notably at the University of Göttingen. Nazi Germany's future leaders received their instruction elsewhere, in an NPEA or "Napola" (NAtionalPOLitische erziehungsAnstalten), of which there were 30 in the nation, where they would receive training to become administrators of conquered provinces.[6]

He bluntly informed teachers that their aim was to educate ethnically aware Germans.[1] Rust also believed that non-Aryan science (such as Albert Einstein's "Jewish physics") was flawed, and had what he felt to be a rational explanation for this view. In an address to scientists, he said, "The problems of science do not present themselves in the same way to all men. The Negro or the Jew will view the same world in a different light from the German investigator."[7] Erika Mann, the daughter of Thomas Mann, wrote an exposé of the Rust system in 1938 entitled School for Barbarians, followed in 1941 by Gregor Ziemer's Education for Death.

Rust reportedly committed suicide on 8 May 1945 when Germany surrendered to Allied forces.

Rust prepared a reform of German orthography, and his fairly extensive version corresponded to the ideas of the spelling reformers of the 1970s (lower case common nouns, elimination of lengthening-symbols). This attempt met internal resistance of the Reich's ministry. The German orthography reform of 1944 also failed.

Before these failures, the rules of the reform were printed in millions of copies intended for classroom use and published in numerous newspapers. The 1944 reform was postponed on the orders of Hitler because it was "not important for the war effort." Some of Rust's innovations had, however, found their way into the 1942 Duden, such as the spelling of the word Kautsch for Couch, which persisted into the 1980s.

Many of the proposed changes were finally implemented with the German orthography reform of 1996.