Bernice Pauahi Bishop (December 19, 1831–October 16, 1884), born Bernice Pauahi Pākī, was an aliʻi (noble) of the Royal Family of the Kingdom of Hawaii and a well known philanthropist. At her death, her estate was the largest private landownership in the Hawaiian Islands, comprising approximately 9% of Hawaii's total area. The revenues from these lands are used to operate the Kamehameha Schools, which were established in 1887 according to Pauahi's will. Pauahi was married to businessman and philanthropist Charles Reed Bishop.

Pauahi was born in Honolulu on December 19, 1831 in ʻAikupika, the grass hut compound of her father,[2] Abner Kuhoʻoheiheipahu Pākī (c. 1808-1855). Pākī was an aliʻi (noble) from the island of Molokaʻi, and son of Aliʻi Kalani-hele-maiiluna, who descended from the aliʻ nui (ruling monarchs) of the island of Maui. Her mother was Laura Kōnia (c 1808-1857), the younger daughter of Ke Aliʻi Pauli Kaʻōleiokū (1767–1818), by his second wife, Ke Aliʻi Kahailiopua Luahine. Kaʻōleiokū was the son of Kānekapōlei, wife of Kalaniʻōpuʻu and Kamehameha I, and Luahine was descended from Kalaimanokahoʻowaha who had greeted Captain Cook in 1778. Pauahi was named for her aunt, Queen Pauahi (c. 1804–1826), a widow of King Kamehameha II, and given the Christian name of Bernice.

In a surviving mele hānau (birth chant) for Pauahi, the names Kalaninuiʻīamamao and Keaweikekahialiʻiokamoku are referenced and considered the main links to the Kamehamehas as Kalaninuiʻīamamao was the father of Kalaniʻōpuʻu and "stepfather" of Keōua, Kamehameha I's father while Keaweikekahialiʻiokamoku was the common ancestor of both men. Pauahi's birth chant does not mention Kamehameha I himself.[3]

She was adopted at birth by Princess Kīnaʻu[4] (who took office in the position of Kuhina-Nui, styled as Kaʻahumanu II) however, when Kīnaʻu gave birth to her daughter, Victoria Kamāmalu in 1838, Bernice was returned to her parents.[5] Kīnaʻu died of the mumps in 1839.[6] Pauahi began attending the Chiefs' Children's School (later called the Royal School) that same year ad remaining there until 1846.[6] Her teachers were Mr. and Mrs. Cooke. Pauahi greatly enjoyed horseback riding and swimming, and she also liked music, flowers, and the outdoors. She dressed like any fashionable New York or London woman and wore the trappings of the Victorian Era. 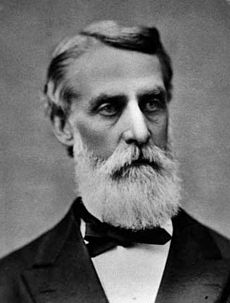 It had been planned from childhood that Pauahi, born into Hawaiian royalty, would marry her hānai (adopted) brother Prince Lot Kapuāiwa. Pauahi married businessman Charles Reed Bishop May 4, 1850 despite the objections of her parents.[7] Per her request, very few people attended her wedding. One of the few witnesses was Princess Elizabeth Kekaʻaniau, her cousin. The couple had no children of their own. They adopted a son named Keolaokalani Davis from Pauahi's cousin Ruth Keʻelikōlani in 1862, against the wish of Ruth's husband, but the infant died at the age of six months. In 1883, they offered to adopt William Kaiheekai Taylor (1882-1956), the infant son of Pauahi's distant cousin Lydia Keōmailani Crowningburg and Wray Taylor; they had been the boy's godparents during his christening at St. Andrews. The Taylors refused to give up their first-born son but instead offered to give one of their twin daughters to the Bishops, but they decided not to accept the second offer.[3]:105, 168 The child, William Edward Bishop Kaiheekai Taylor was one of the first students at the Kamehameha's Preparatory Department and would later serve as the kahu (caretaker) of the Royal Mausoleum of Hawaii at ʻMauna Ala from 1947 until his death in 1956.[8]

Heir to the throne

Pauahi was educated at the Royal School and was eligible to be a named heir. Prince Lot Kapuāiwa ruled as Kamehameha V and offered Pauahi the throne on his deathbed in 1872. But, taken aback, she replied, "No, no, not me; don't think of me. I don't need it." The king pressed on. But she again spurned the throne: "Oh, no, do not think of me. There are others." The king died an hour later. Pauahi's refusal to accept the crown allowed the Lunalilo to become the first and only elected monarch of the kingdom. On October 16, 1884, at the age of 52, Pauahi died of breast cancer at Keōua Hale, Honolulu. She is interred in the Kamehameha Crypt at Royal Mausoleum of Hawaii at Mauna ʻAla on Oʻahu.

Bishop wished that a portion of her estate be used "to erect and maintain in the Hawaiian Islands two schools...one for boys and one girls, to be known as, and called the Kamehameha Schools."[9][10] She directed her five trustees to invest her estate at their discretion and use the annual income to operate the schools. When she wrote her will, only 44,000 Hawaiians were alive. After Bishop's death in 1884, her husband Charles Reed Bishop started work in carrying out her will.

Charles Reed Bishop founded the Bernice P. Bishop Museum in 1889 as another memorial to Pauahi, using the building that was the original school.

Her will caused three major controversies. In 1992, a clause that all Kamehameha Schools teachers must be Protestant was challenged as illegal religious discrimination in employment by the Equal Employment Opportunity Commission. The United States Court of Appeals for the Ninth Circuit reversed a decision of the district court, and found that the school had not proved that it was "primarily religious", and thus this clause violated the Civil Rights Act of 1964.[11]

In 1997, several conflicts of interest were charged. Trustees received up to $900,000 per year and put their own money into the investments of the estate. The Supreme Court of Hawaii was directed in the will to replacement trustees, but also ruled on many cases involving the estate. An essay by Judge Samuel Pailthorpe King and University of Hawaii William S. Richardson School of Law Professor Randall W. Roth and others was published as a series of newspaper articles,[12] and later a book. After a number of legal battles, the trustees resigned and management was re-organized.[13]

Trustees were instructed "to devote a portion of each year's income to the support and education of orphans, and others in indigent circumstances, giving the preference to Hawaiians of pure or part aboriginal blood."[10] Traditionally, this was interpreted to admit almost no students that could not prove native Hawaiian ancestry. A number of lawsuits challenged this policy. One included a settlement reported to be $7 million.[14]