From Infogalactic: the planetary knowledge core
Jump to: navigation, search
For other uses, see Berserker (disambiguation) and Berserk. 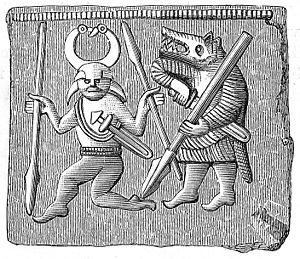 Berserkers (or berserks) were Norse warriors who are primarily reported in the Old Norse literature to have fought in a nearly uncontrollable, trance-like fury, a characteristic which later gave rise to the English word berserk. Berserkers are attested to in numerous Old Norse sources.

The Úlfhéðnar (singular Úlfheðinn), another term associated with berserkers, mentioned in the Vatnsdæla saga, Haraldskvæði and the Völsunga saga, were said to wear the pelt of a wolf when they entered battle.[1] Úlfhéðnar are sometimes described as Odin's special warriors: "[Odin's] men went without their mailcoats and were mad as hounds or wolves, bit their shields...they slew men, but neither fire nor iron had effect upon them. This is called 'going berserk'."[2]:132 In addition, the helm-plate press from Torslunda depicts (below) a scene of Odin with a berserker—"a wolf skinned warrior with the apparently one-eyed dancer in the bird-horned helm, which is generally interpreted as showing a scene indicative of a relationship between berserkgang... and the god Odin[3]"—with a wolf pelt and a spear as distinguishing features.[4]

The name berserker derives from the Old Norse berserkr (plural berserkir). This expression most likely arose from their reputed habit of wearing a kind of shirt or coat (serkr) made from the pelt of a bear (ber-) during battle. The bear was one of the animals representing Odin, and by wearing such a pelt the warriors sought to gain the strength of a bear and the favor of Odin.

The element ber- was sometimes interpreted as berr-, meaning "bare", which Snorri Sturluson understood to mean that the warriors went into battle bare-chested, or "without armor" as men of Odin.[5] This view has since been largely abandoned.[6]

To "go berserk" was to "hamask", which translates as "change form", in this case, as with the sense "enter a state of wild fury". One who could transform as a berserker was typically thought of as "hamrammr" or "shapestrong".[2]:126 For example, the band of men that go with Skallagrim in Egil's Saga to see King Harald about his brother Thorolf's murder are described as "the hardest of men, with a touch of the uncanny about a number of them...they [were] built and shaped more like trolls than human beings". This is generally interpreted as the band of men being "hamrammr".[7] 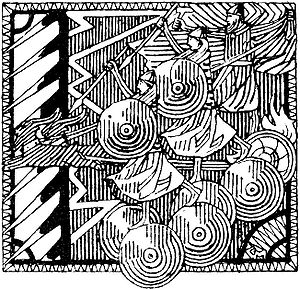 Berserkers appear prominently in a multitude of other sagas and poems, many of which describe berserkers as ravenous men who loot, plunder, and kill indiscriminately. Later, by Christian interpreters, the berserker was viewed as a "heathen devil".[8]

The earliest surviving reference to the term "berserker" is in Haraldskvæði, a skaldic poem composed by Thórbiörn Hornklofi in the late 9th century in honor of King Harald Fairhair, as ulfheðnar ("men clad in wolf skins"). This translation from the Haraldskvæði saga describes Harald's berserkers:

I'll ask of the berserks, you tasters of blood,

Those intrepid heroes, how are they treated,
Those who wade out into battle?
Wolf-skinned they are called. In battle
They bear bloody shields.
Red with blood are their spears when they come to fight.
They form a closed group.
The prince in his wisdom puts trust in such men
Who hack through enemy shields.[9]

The Icelandic historian and poet Snorri Sturluson (1179–1241) wrote the following description of berserkers in his Ynglinga saga:

His (Odin's) men rushed forwards without armour, were as mad as dogs or wolves, bit their shields, and were strong as bears or wild oxen, and killed people at a blow, but neither fire nor iron told upon them. This was called Berserkergang.[10]

King Harald Fairhair's use of berserkers as "shock troops" broadened his sphere of influence. Other Scandinavian kings used berserkers as part of their army of hirdmen and sometimes ranked them as equivalent to a royal bodyguard. It may be that some of those warriors only adopted the organization or rituals of berserk männerbünde, or used the name as a deterrent or claim of their ferocity.

Emphasis has been placed on the frenzied nature of the berserkers, hence the modern sense of the word "berserk". However, the sources describe several other characteristics that have been ignored or neglected by modern commentators. Snorri's assertion that "neither fire nor iron told upon them" is reiterated time after time. The sources frequently state that neither edged weapons nor fire affected the berserks, although they were not immune to clubs or other blunt instruments. For example:

These men asked Halfdan to attack Hardbeen and his champions man by man; and he not only promised to fight, but assured himself the victory with most confident words. When Hardbeen heard this, a demoniacal frenzy suddenly took him; he furiously bit and devoured the edges of his shield; he kept gulping down fiery coals; he snatched live embers in his mouth and let them pass down into his entrails; he rushed through the perils of crackling fires; and at last, when he had raved through every sort of madness, he turned his sword with raging hand against the hearts of six of his champions. It is doubtful whether this madness came from thirst for battle or natural ferocity. Then with the remaining band of his champions he attacked Halfdan, who crushed him with a hammer of wondrous size, so that he lost both victory and life; paying the penalty both to Halfdan, whom he had challenged, and to the kings whose offspring he had violently ravished...[11]

Similarly, Hrolf Kraki's champions refuse to retreat "from fire or iron". Another frequent motif refers to berserkers blunting their enemy's blades with spells or a glance from their evil eyes. This appears as early as Beowulf where it is a characteristic attributed to Grendel. Both the fire eating and the immunity to edged weapons are reminiscent of tricks popularly ascribed to fakirs.

The Lewis Chessmen, found on the Isle of Lewis (Outer Hebrides, Scotland) but thought to be of Norse manufacture, include berserkers depicted biting their shields.

Scholar Hilda Ellis-Davidson draws a parallel between berserkers and the mention by the Byzantine emperor Constantine VII (AD 905–959) in his book De cerimoniis aulae byzantinae ("Book of Ceremonies of the Byzantine court") of a "Gothic Dance" performed by members of his Varangian Guard (Norse warriors working in the service of the Byzantine Empire), who took part wearing animal skins and masks: she believes this may have been connected with berserker rites.[12]

The actual fit of madness the berserker experienced was referred to as berserkergang ("going berserk"). This condition has been described as follows:

This fury, which was called berserkergang, occurred not only in the heat of battle, but also during laborious work. Men who were thus seized performed things which otherwise seemed impossible for human power. This condition is said to have begun with shivering, chattering of the teeth, and chill in the body, and then the face swelled and changed its colour. With this was connected a great hot-headedness, which at last gave over into a great rage, under which they howled as wild animals, bit the edge of their shields, and cut down everything they met without discriminating between friend or foe. When this condition ceased, a great dulling of the mind and feebleness followed, which could last for one or several days.[13]

Theories about what caused berserker behaviour include ingestion of materials with psychoactive properties, psychological processes, and medical conditions.

When Viking villages went to war in unison, the berserkers often wore special clothing, for instance furs of a wolf or bear, to indicate that this person was a berserker, and would not be able to tell friend from foe when in rage "bersærkergang". In this way, other allied would know to keep their distance.[14]

Some scholars believe certain examples of berserker rage to have been induced voluntarily by the consumption of drugs such as the hallucinogenic mushroom Amanita muscaria[13][15][16] or massive amounts of alcohol.[17] While such practices would fit in with ritual usages, other explanations for the berserker's madness have been put forward, including self-induced hysteria, epilepsy, mental illness, or genetics.[18]

Jonathan Shay makes an explicit connection between the berserker rage of soldiers and the hyperarousal of post-traumatic stress disorder.[19] In Achilles in Vietnam, he writes:

If a soldier survives the berserk state, it imparts emotional deadness and vulnerability to explosive rage to his psychology and permanent hyperarousal to his physiology — hallmarks of post-traumatic stress disorder in combat veterans. My clinical experience with Vietnam combat veterans prompts me to place the berserk state at the heart of their most severe psychological and psychophysiological injuries.[20]

The word "berserker" today applies to anyone who fights with reckless abandon and disregard to even his own life, a concept used during the Vietnam War and in Vietnam-inspired literature (Michael Herr's Dispatches) and film (Oliver Stone's Platoon and Adrian Lyne's Jacob's Ladder). "Going berserk" in this context refers to a state induced by adrenaline (or military-issued amphetamine for long missions) in the human body and brain leading a soldier to fight with fearless rage and indifference, a state strikingly similar to that of the 9th-century berserkers.[citation needed]

"Going berserk" is also used colloquially to describe a person who is acting in a wild rage or in an uncontrolled and irrational manner.