The Sans Souci Ferry is the county's only ferry.

The county was formed as Bertie Precinct in 1722 from the part of Chowan Precinct of Albemarle County lying west of the Chowan River. It was named for James Bertie, his brother Henry Bertie, or perhaps both, each having been one of the Lords Proprietors of Carolina.

Bertie County is a member of the Mid-East Commission regional council of governments. 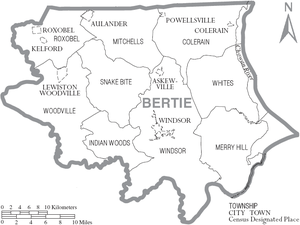