From Infogalactic: the planetary knowledge core
Jump to: navigation, search
Not to be confused with Berwick-upon-Tweed (borough).

Berwickshire is a lieutenancy area and historic county in the Scottish Borders. It takes its name from Berwick-upon-Tweed, which was part of Scotland at the time of the county's formation, but became part of England in 1482.

From 1596 to 1890 the county town was Greenlaw.[2] However, this was changed to Duns by the Local Government (Scotland) Act 1889, the act which established the system of county councils in Scotland.

The county borders Roxburghshire and Selkirkshire to the west, East Lothian and Midlothian to the north, the North Sea to the east and a portion of the Anglo-Scottish border with Northumberland to the south.

Prior to 1975 Berwickshire contained four burghs and three districts:

Berwickshire County Council was abolished by the Local Government (Scotland) Act 1973 and the county was instead governed by the Borders Regional Council. This region was divided into four districts, one of which was named Berwickshire District; however its area was not congruent with the county's, with the burgh of Lauder and most of the county's West District included in the Ettrick and Lauderdale District and the parish of Nenthorn included in the Roxburgh District. Beriwckshire District Council remained based in Duns, the old county town.

The system of regions and districts was in turn abolished in 1996 in favour of unitary councils. Berwickshire is now governed by the unitary Scottish Borders Council. 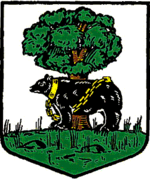 The county council of Berwickshire was formed in 1890 by the Local Government (Scotland) Act 1889, and applied for a grant of arms the same year. The grant, by Lord Lyon King of Arms was made on the 10th of October.

The coat of arms shows a bear chained to a wych elm tree, a pun on the county's name: bear + wych = Berwick.[3] In heraldry, this is known as a canting arms.

Upon the abolition of Berwickshire County Council, the arms were regranted to Berwickshire District Council.[4] When the district council was abolished the arms reverted to the Crown.

the coat of arms is featured on Berwickshire High School badge 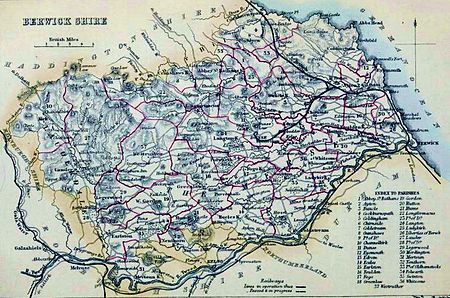 Refer to the List of civil parishes in Scotland

(See Civil parish list above for villages in those parishes) Other places in Berwickshire include :

The Berwickshire Civic Society is currently campaigning for road signs at the entrances to the county to have notices added saying 'You are now entering the ancient county of Berwickshire', and they hold an annual Keep Berwickshire Tidy Campaign, judged each April.

The High school west of Duns is named Berwickshire High School, it has been open since 1896. Together with Eyemouth High School they run a Rugby team under the name of Berwickshire schools.

The Berwickshire Coastal Path runs from Cockburnspath to Berwick-upon-Tweed (28 miles).