Bethesda-by-the-Sea is an Episcopal Church by the Lake Worth Lagoon in Palm Beach, Florida.[1] It is the oldest house of worship in Palm Beach. The church consists of the main building featuring an example of the gothic revival style surrounding a courtyard.

Initially the church began in the Little Red Schoolhouse in January 1889. The initial church was built of mostly wood from lumber from the beach with service beginning in April that year. There was little access to the church aside from by boat. A larger new lot was sought in the following years with a rectory being built in 1890 and a second church built in the spring of 1895. The second church held its last service on Easter Sunday April 12, 1925.[2] 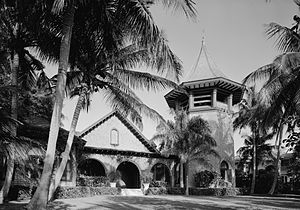 The church held the first service at its current location on Christmas Day 1926.

It is known for being where Donald and Melania Trump got married on January 22, 2005[3] and also where Michael Jordan and Yvette Prieto got married on April 27, 2013.[4]