Since the 2014 boundary changes, the constituency has contained the following electoral wards:

Between the 1983 and 1997 general elections, the equivalent seat was Bethnal Green and Stepney.

The Tower Hamlets wards of Blackwall and Cubitt Town, Bromley-by-Bow, East India and Lansbury, Limehouse, Mile End East, Millwall, St Katherine’s and Wapping and Shadwell were before 2010 under the national Boundary Commission for England review which identified a need for London representation changes based on electorate estimates moved to the new constituency of Poplar and Limehouse. In this review a name change to "Tower Hamlets North" was publicly consulted on and rejected. 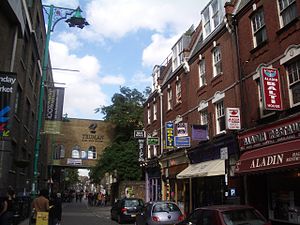 The seat is centred on the northern part of the London Borough of Tower Hamlets, taking in much of Bethnal Green, Bow and Stepney. It includes much of the traditional East End and Brick Lane. The seat has a large Muslim community – one of the largest proportion of Muslim voters in the country. Whereas the seat has many small conservation areas,[5] it measures overall as among the poorest by income in London and is one of the most ethnically diverse, there is no majority ethnic group — large ethnic groups are British Bangladeshi, British Pakistani, White British, other White European and Black British.

Workless claimants who were registered jobseekers were in November 2012 higher than the national average of 3.8%, at 6% of the population based on a statistical compilation by The Guardian.[6]

Bethnal Green and Bow is, based on results in local and national elections, traditionally a very safe Labour territory, its predecessor seats being held by Labour since before World War II however the 2005 Respect victory in this seat showed that a moderate Labour candidate may not always been radical enough for the electorate who were won over that year by that party's candidate, George Galloway, generally considered to be far-left, who mounted a campaign focussed on two seats (see Poplar and Shoreditch and see, as to council representation, the London Borough of Tower Hamlets).

In 1974 the Bethnal Green constituency was abolished. A new seat was created with the strict official name of Tower Hamlets, Bethnal Green and Bow. However the London Borough prefix is not commonly used for seats in the 1974–1983 redistribution.

The 1974–1983 constituency was a safe Labour seat, with the Liberal Party in a distant second place. Ian Mikardo, a well known back bench Labour MP, represented the area in this period.

Between 1983 and 1997, most of the present constituency formed the seat of Bethnal Green and Stepney.

The borough of Tower Hamlets has a reputation for being a bastion of radical politics, historically with a minority of Communists on its council and more recently with Respect forming the largest opponents to the quite frequent large Labour majorities on the council level. Before a recent revival, the Conservative Party were absent from the council from 1931 until 2006 – and all of its revival has been in the two riverside wards which does not apply to any of this seat.[7] The Liberal Party remained the main challengers to Labour in the Bethnal Green area but the loss of Percy Harris as Bethnal Green South West MP and eventually as London County Councillor too (despite a temporary comeback in 1946) put them out of the running in Parliamentary elections until a Liberal revival began in Bow in the late 1970s. Tower Hamlets was the only London Borough to have had seats held by the Communist Party of Great Britain; they lost their last seats in 1971. Between 1945 and 1950, Mile End provided the CPGB with one of its two parliamentary seats, being represented by Phil Piratin. Two Communists also won seats on the London County council (LCC) in 1947.

Between 1986 and 1994, the Liberal Democrats controlled Tower Hamlets London Borough Council, this proved a successful but controversial period. The delivery of major infrastructure projects, including many schools and school housing projects, was balanced by alleged corruption.

In the 1997 general election, there was a swing of 5% to the Conservative Party at a time when the national trend was a landslide swing against them. Bethnal Green and Bow was one of only two constituencies (of which there were more than 630) to have any sort of pro-Conservative swing. The other constituency was Bradford West. The Labour Party, broadsheets and local newspapers ascribed this unusual result to problems over the selection of a Labour Party candidate, following the retirement of Peter Shore. Oona King, who won the selection, was not well known and many in the local area would have preferred a candidate from for example a Bangladeshi background. However the leading Bangladeshi candidates in the local Labour Party were excluded from the selection.

Following British participation in the invasion of Iraq, an action deeply unpopular with the Muslim community in the constituency but nevertheless supported by Oona King, the newly formed Respect coalition gained support. They topped the poll in Tower Hamlets in the 2004 European Parliamentary elections and subsequently won their first local council seat in a by-election. In the May 2005 general election, the seat was narrowly won by former Labour MP George Galloway, one of Respect's leading figures. Respect also won seats in the 2006 local council elections although its performance was not as strong as many observers believed it could have been.[citation needed]

George Galloway has attracted criticism for lack of attendance at Parliament, especially when he appeared in the reality TV programme Big Brother.[citation needed] However, he has countered that he has not missed any crucial votes and that the best way for him to advance the interests of his constituents is by general campaigning. Galloway had always said that he only intended to stay in the seat for one parliament and in 2010 stood for the neighbouring constituency of Poplar and Limehouse. However, he lost the poll to the Labour incumbent Jim Fitzpatrick.

In September 2007, the Respect party selected Abjol Miah, the leader of the Respect Group on Tower Hamlets Council as their candidate to replace George Galloway in Bethnal Green and Bow. He had worked in the local area as a radio presenter, drugs worker and martial arts trainer. The Labour Party selected Rushanara Ali, an Oxford graduate who had previously worked as Parliamentary Assistant to former MP Oona King,[8] then working for local charity The Young Foundation. Ajmal Masroor, a television presenter on political debates and an imam,[9] was the Liberal Democrat Candidate. Zakir Khan was selected by the Conservative Party from an open primary. He was the Head of Public Affairs for the Canary Wharf Group based in Tower Hamlets, and a former sports manager.