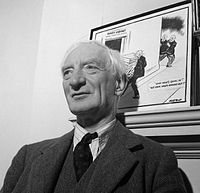 The 1942 report on Social Insurance and Allied Services,[1] known commonly as the Beveridge Report, was an influential document in the founding of the welfare state in the United Kingdom, published in November 1942.[2] It was chaired by the Liberal economist William Beveridge, who identified five "Giant Evils" in society: squalor, ignorance, want, idleness, and disease, and went on to propose widespread reform to the system of social welfare to address these. The Report came in the midst of war, and promised a reward for the sacrifices undertaken by everyone. Highly popular with the public, the report formed the basis for the post-war reforms known as the Welfare State, which include the expansion of National Insurance and the creation of the National Health Service. The report was printed by Alabaster Passmore & Sons Limited which kept their factory in Maidstone busy when there was very little other printing work available.

In 1940, during the Second World War, the Labour Party had entered into a coalition with the Conservative Party. On 10 June 1941 Arthur Greenwood, the Labour MP and Minister without Portfolio, had announced the creation of an inter-departmental committee which would carry out a survey of Britain's social insurance and allied services:

To undertake, with special reference to the inter-relation of the schemes, a survey of the existing national schemes of social insurance and allied services, including workmen's compensation, and to make recommendations.

Its members were civil servants from the Home Office, Ministry of Labour and National Service, Ministry of Pensions, Government Actuary, Ministry of Health, HM Treasury, Reconstruction Secretariat, Board of Customs and Excise, Assistance Board, Department of Health for Scotland, Registry of Friendly Societies and Office of the Industrial Assurance Commissioner.

The Report offered three guiding principles to its recommendations:

Beveridge was opposed to "means-tested" benefits. His proposal was for a flat rate contribution rate for everyone and a flat rate benefit for everyone. Means-testing was intended to play a tiny part because it created high marginal tax rates for the poor (the "poverty trap").

Inside the Cabinet, there was debate, instigated by Brendan Bracken, on 16 November 1942 over whether to publish the Report as a White Paper at that time. The Chancellor of the Exchequer, Sir Kingsley Wood, said that it involved "an impracticable financial commitment" and that publication should therefore be postponed. However, the Cabinet decided on 26 November to publish it on 2 December.[3]

The Ministry of Information Home Intelligence found that the Report had been "welcomed with almost universal approval by people of all shades of opinion and by all sections of the community" and seen as "the first real attempt to put into practice the talk about a new world". In a sample taken in the fortnight after the Report's publication, the British Institute of Public Opinion found that 95% of the public had heard of the Report and that there was "great interest in it" but criticism that old age pensions were not high enough. They also found that "there was overwhelming agreement that the plan should be put into effect".[4]

The Times said of the Report: "a momentous document which should and must exercise a profound and immediate influence on the direction of social change in Britain". The Manchester Guardian called it "a big and fine thing". The Daily Telegraph said it was a consummation of the revolution begun by David Lloyd George in 1911. The Archbishop of Canterbury, William Temple, said it was "the first time anyone had set out to embody the whole spirit of the Christian ethic in an Act of Parliament".[4]

There was a planned debate in Parliament on the Report for February 1943 so the Cabinet appointed the Lord President of the Council, Sir John Anderson, to chair a committee to consider the Report and to set out the government's line in the Commons debate. In the Commons debate the government announced they would not implement the Report immediately. The Tory Reform Committee, consisting of 45 Conservative MPs, demanded the founding of a Ministry of Social Security immediately. At the division at the end of the debate, 97 Labour MPs, 11 Independents, 9 Liberals, 3 Independent Labour Party MPs and 1 Communist voted against the government.[5] A Ministry of Information Home Intelligence report found that after the debate the left-wing section of the public were disappointed but that "an approving minority" thought that the government was correct in waiting until the post-war financial situation were known before making a decision. An opinion poll by the British Institute of Public Opinion found that 29% were satisfied with the government's attitude to the Report; 47% were dissatisfied and 24% "don't knows".[6]

Winston Churchill gave a broadcast on 21 March 1943 entitled "After the War", where he warned the public not to impose "great new expenditure on the State without any relation to the circumstances which might prevail at the time" and said there would be "a four-year plan" of post-war reconstruction "to cover five or six large measures of a practical character" which would be put to the electorate after the war and implemented by a new government. These measures were "national compulsory insurance for all classes for all purposes from the cradle to the grave"; the abolition of unemployment by government policies which would "exercise a balancing influence upon development which can be turned on or off as circumstances require"; "a broadening field for State ownership and enterprise"; new housing; major reforms to education; largely expanded health and welfare services.[7] Churchill's commitment to creating a welfare state was limited and he and the Conservative Party opposed much of the implementation of the Beveridge Report, including voting against the founding of the NHS.[8]

The Labour Party won the 1945 general election on a platform that promised to address what the Beveridge report called "the five giant evils" of society: Want, Disease, Ignorance, Squalor, and Idleness. Beveridge's recommendation were implemented through a series of acts of parliament (namely the National Insurance Act, the National Assistance Act and the National Health Service Act),founding the modern welfare state.[8] Labour deviated somewhat from Beveridge in the role the state would play in the provision of key services. Labour leaders opposed Beveridge's idea of a National Health Service run through local health centres and regional hospital administrations, preferring a state-run body.[9] Beveridge complained about the opposition of Labour leaders, including that of Ernest Bevin: "For Ernest Bevin, with his trade-union background of unskilled workers... social insurance was less important than bargaining about wages." Bevin derided the Beveridge Report as a "Social Ambulance Scheme" and followed the Coalition Government's view that it should not be implemented until the end of the war (he was furious in February 1943 when a large number of Labour back-benchers ignored their leaders and voted against delay in implementing Beveridge).

The war years saw great improvements in working conditions and welfare provisions, which paved the way for the postwar welfare state. Infant, child, and maternity services were expanded, while the Official Food Policy Committee (chaired by the deputy PM and Labour leader Clement Attlee) approved grants of fuel and subsidised milk to mothers and to children under the age of five in June 1940. A month later, the Board of Education decided that free school meals should become more widely available. By February 1945, 73% of children received milk in school, compared with 50% in July 1940. Free vaccination against diphtheria was also provided for children at school.[10] In addition, the Town and Country Planning Act 1944 gave consideration to those areas damaged in bombing raids and enabled local authorities to clear slums, while the Housing (Temporary Accommodation) Act passed that same year made £150 million available for the construction of temporary dwellings.[11]

To improve conditions for elderly persons, supplementary pensions were introduced in 1940, and in 1943, there were further improvements in rates and conditions for those in receipt of supplementary pensions and unemployment assistance. Food prices were stabilised in December 1939, initially as temporary measure, but made permanent in August 1940, while both milk and meals were provided at subsidised prices, or free in those cases of real need.[12]

In July 1940, increased Treasury grants led to an improvement in the supply of milks and meals in schools, with the number of meals taken doubled within a year and increased school milk by 50%. By 1945, roughly 33% of all children ate at school compared with just 3.3% (one in thirty) in 1940, while those taking milk increased from about 50% to roughly 75%. In 1940, a national milk scheme was launched, which provided a pint of milk at about half price for all children under the age of five, and for expectant or nursing mothers. The take-up rate was such that, by 1944, 95% of those eligible had participated in the scheme. The government’s general food policy that priority groups like young children and mothers were not just entitled to essentials like milk, but actually received supplies as well. Evacuation during the course of the war also revealed, to more prosperous Britons, the extent of deprivation in society. As noted by one historian, evacuation became “the most important subject in the social history of the war because it revealed, to the whole people, the black spots in its social life.”[13]

An Emergency Hospital Service was introduced, which provided free treatment to casualties (a definition which included war evacuees), while rationing led to significant improvements in the diets of poor families. As noted by Richard Titmuss,

"The families in that third of the population of Britain who, in 1938, were chronically undernourished, had their first adequate diet in 1940 and 1941 ... [after which] the incidence of deficiency diseases, and notably infant mortality, dropped dramatically."[14]