From Infogalactic: the planetary knowledge core
Jump to: navigation, search
For the neighbourhood in Istanbul, see Beylerbeyi.

Beylerbey or Beylerbeyi (Ottoman Turkish: بكلربكی‎; "Bey of Beys", meaning "the Commander of Commanders" or "the Lord of Lords"; originally Beglerbeg[i] in older Turkic) was a high rank in the western Islamic world in the late Middle Ages and early modern period, from the Seljuks of Rum and the Ilkhanids to Safavid Persia and the Ottoman Empire. Initially designating a commander-in-chief, it eventually came to be held by senior provincial governors. In Ottoman usage, where the rank survived the longest, it designated the governors-general of some of the largest and most important provinces, although in later centuries it became devalued into a mere honorific title. Its equivalents in Arabic were amir al-umara, and in Persian, mir-i miran.

The title was also used by the Khans of the Indian (later Pakistani) princely state of Kalat.

The title originated with the Seljuqs, and was used in the Sultanate of Rum initially as an alternative for the Arabic title of malik al-umara ("chief of the commanders"), designating the army's commander-in-chief.[1] Among the Mongol Ilkhanids, the title was used to designate the chief amir al-ulus ("emir of the state")—also known by the Turkic title ulusbegi and the Arabic amir al-umara–while in the Golden Horde it was applied to all the holders of the rank of amir al-ulus.[1][2] The Mamluks of Egypt possibly used it as an alternative title for the atabak al-asakir, the commander-in-chief of the army.[1]

The Ottomans used the title from the late 14th until the mid-19th century, with varying meanings and degrees of importance.[1] The early Ottoman state continued to use the term beylerbey in the meaning of commander-in-chief, held by princes of the Ottoman dynasty: under the Ottoman Empire's founder, Osman I (ruled 1299–1326), his son Orhan held the post, and during Orhan's reign (1324–1362), his brother Alaeddin Pasha and Orhan's son Süleyman Pasha.[3][4]

The first step towards the transformation of the office into a gubernatorial title occurred when the title was given by Murad I (r. 1362–89) to Lala Shahin Pasha, as a reward for his capture of Adrianople (modern Edirne) in the 1360s. In addition, Lala Shahin was given military authority over the Ottoman territories in Europe (Rumelia).[1][4] This marked the beylerbey effectively as the viceroy of the European territories as the Sultans still resided in Anatolia, and as the straits of the Bosporus and the Dardanelles, which connected the two parts of the Ottoman state, continued to escape full Ottoman control until the Fall of Constantinople in 1453.[4]

After Lala Shahin's death, sometime in 1385–87 he was succeeded in the position of commander-in-chief in Rumelia by Çandarlı Kara Halil Hayreddin Pasha. In 1393, Sultan Bayezid I (r. 1389–1402) appointed Kara Timurtash as beylerbey and viceroy was in Anatolia, when Bayezid crossed over into Europe to campaign against Mircea I of Wallachia.[1][4] This process marked the birth of the first two, and by far the most important, beylerbeyliks, of Rumelia and Anatolia, while the third beylerbeylik, that of Rûm, followed soon after.[4] 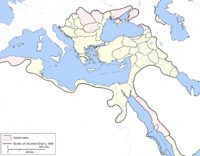 The eyalets of the Ottoman Empire in 1609

The beylerbey was in charge of a province—termed beylerbeylik or generically vilayet, "province", while after 1591 the term eyalet was used and beylerbeylik came to mean the office of beylerbey[5]—further subdivided into sanjaks or "liwa"s under sanjakbeys.[1][3] With the continuous growth of the Ottoman Empire in the 15th and 16th centuries, new provinces were established, and the ranks of the beylerbeys swelled to a maximum of 44 by the end of the 16th century.[1][6] A list of eyalets in 1609 mentions 32 in total, of which 23 regular eyalets where revenue was distributed among the military fief-holders, while the rest (in North Africa and the Middle East) were under the salyane system, i.e. their revenue was sent to the imperial treasury, and the officials and soldiers were paid salaries from it.[7] The size of these new provinces varied enormously: some containing as many as twenty sanjaks, and others as few as two, including the beylerbey's own residence (or pasha-sanjakı).[6] Among themselves, the various beylerbeys had an order of precedence based on the date of conquest or formation of their provinces. The beylerbey of Rumelia, however, retained his pre-eminence, ranking first among the other provincial governors-general, and being accorded a seat in the Imperial Council (divan) after 1536. In addition, the post was occasionally held by the Sultan's chief minister, the Grand Vizier himself.[1][4]

File:Ralamb-103.jpg
Depiction of the beylerbey of the Bosnia Eyalet (1657)

In his province, the beylerbey was regarded as a virtual viceroy of the Sultan: he had full authority over matters of war, justice and administration, except in so far as they were limited by the authority of other officials also appointed by the central government, chiefly the various fiscal secretaries under the mal defterdari and the kadı, who could appeal directly to the imperial government. In addition, as a further check to their power, the Janissary contingents stationed in the province's cities were outside his authority, and beylerbeys were even forbidden from entering the fortresses garrisoned by the Janissaries.[8][7] The beylerbey also had his own court and government council (divan) and could freely grant fiefs (timars and ziamets) without prior approval by the Sultan, although this right was curtailed after 1530, when his authority was restricted to smaller timars only.[1] Having its origin in the military, the primary responsibility of the beylerbeys and their sanjakbeys was the maintenance the sipahi cavalry, formed by the holders of the military fiefs, whom they led in person on campaign.[1][9]

From the reign of Mehmed II (r. 1451–1481) onwards, the title of beylerbey also became an honorary court rank, coming after the viziers; both viziers and beylerbeys were titled pashas, with the viziers sporting three horse-tails and the beylerbeys two.[1] From the 16th century on, however, viziers could be appointed as provincial beylerbeys, enjoying precedence and authority over the ordinary beylerbeys of the neighbouring provinces.[1] Towards the end of the 17th century, the title of beylerbey of Rumelia (Rumeli beylerbeysi) also began to be awarded as an honorific rank, alongside the actual holder of the provincial post, even to officials unrelated to the provincial administration, such as the chief treasurer (defterdar).[1][6]

Beginning in the 18th century, the Arabic title of wali began to be increasingly used for provincial governors-general at the expense of beylerbey, except for the two original beylerbeys of Rumelia and Anatolia; the Arabic title amir al-umara, and the Persian mir-i miran or mirmiran, which had been used as equivalents of the beylerbey, now increasingly came to refer only to the honorary rank, which in turn was increasingly devalued. The process culminated with the vilayet reform of 1864, after which wali became the only official designation for the governor-general of a province, while the title of beylerbey survived only in the honorary rank of Rumeli beylerbeysi, which continued in use alongside its Perso-Arabian equivalents.[1] 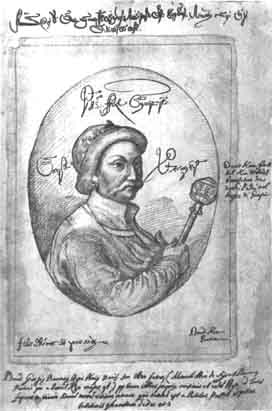 Daud Khan Undiladze, ghilman and the beylerbey of Ganja and Karabakh from 1625 to 1630.

Under the Safavid dynasty of Persia, the title was used from ca. 1543/44 on for governors (generically styled hakim) of the more important provinces. The title was thus used for the governors of Herat, Azerbaijan, Ganja, Karabakh, Shirvan, Fars, Iraq, and Astarabad.[10] The Safavids also used the title of wali for provinces even more important than those of beylerbeys. Towards the end of the Safavid period, the title of beylerbey had been eclipsed by that of wali, most notably being the wali's of the shah's their Georgian lands.[2][11]