Bhai Mati Das was a Sikh disciple, and is venerated as one of the greatest martyrs in Sikh history. They belonged to the family of Chhibber Brahmins of Punjab and then sacrificed their life to the cause of Guru Teg Bahadur.He along with his younger brother Bhai Sati Das and Bhai Dyal Das, all disciples of the ninth Sikh Guru, Guru Tegh Bahadur (1621–1675), were executed along with him at the Kotwali(police-station) near the Sunehri Masjid in the Chandni Chowk area of Old Delhi, under the express orders of emperor Aurangzeb. 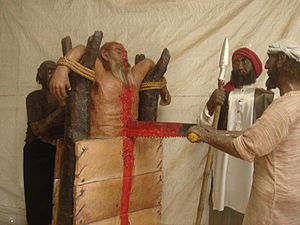 Sacrifice of Bhai Mati Das for the Sikh faith, being brutually killed by the Mughals, this image is from a Sikh History museum being run single handedly by one person in a small tin shed on way from Mohali to Sirhind in Punjab, India

Bhai Mati das belonged to the village of Karyala in the family of Chhibber Brahmins, in the Jhelum District in Punjab (Pakistan), about ten kilometres from Chakwal on the road to the Katas Raj temple complex.

The title of Bhai was an honor given to these people for their contribution and dedication in following the teachings of Guru Teg Bahadur Ji.This title of Bhai is still being used by some families of the region in Distt. Sangrur.They resided in Kaimbowal village (now Longowal in Sangrur District, Punjab). A school in Longowal has been named in memory of Bhai Mati Das.

Devotion to the Gurus

Mati Das was the son of Hira Nand(Punjabi Brahmin), a disciple of Guru Har Gobind, under whom he had fought in many battles. He survived the Guru, and a little before his death he had entrusted his two sons, Mati Das and Sati Das to the care of Guru Har Rai, who had assured the dying man of his full attention and help. Both the lads remained attached to the Guru's family at Kiratpur. When Guru Har Krishan was summoned to Delhi by Aurangzeb, both the brothers, Mati Das and Sati Das, were present in his entourage along with Dyal Das.

On Guru Har Krishan's death at Delhi, these two brothers were included in the deputation of five men containing Dyal Das and Gurditta to declare the nomination of Teg Bahadur as the ninth Guru at the village of Bakala where the new Guru was then residing. The Guru was pleased to offer the two important portfolios of finance and home departments to Mati Das and Sati Das respectively. Both knew Persian well, and were quite familiar with the working of the Guru's durbar. The departmnent of household affairs was entrusted to Dyal Das.

The two brothers accompanied Guru Teg Bahadur during his journey to Assam. Guru Tegh Bahadur bought a hillock near the village of Makhowal five miles north of Kiratpur and established a new town, which he named as Anandpur (the abode of bliss). Mati Das and Sati Das were present at the foundation of Anandpur. The Guru's council of administration then consisted of Mati Das, Sati Das, Dyal Das. When the Guru was arrested and taken to Delhi, these three persons followed the Guru.

At Delhi, the Guru and his three companions were summoned into the council chamber of the Red Fort. The Guru was asked numerous questions on religion, Hinduism, Sikhism and Islam. It was suggested to the Guru that he should embrace Islam. On the Guru's emphatic refusal to abjure his faith, he was asked why he was called Teg Bahadur (gladiator or Knight of the Sword; before this, his name had been Tyag Mal). Bhai Mati Das immediately replied that the Guru had won the title by inflicting a heavy blow on the imperial forces at the young age of fourteen. He was reprimanded for his breach of etiquette and outspokenness. As Mati Das was a Brahmin, the Guru was asked why he had courted the company of such men when he did not believe in caste, and why he was defending the Brahmins of Kashmir. The Guru replied that when a person becomes a Sikh, he loses his caste. As for the Kashmiri Pandits, it was his duty to raise his voice against cruelty and injustice. The Guru and his companions were ordered to be imprisoned and tortured until they agreed to embrace Islam.

After a few days, Guru Teg Bahadur and three of his companions were produced before the Qazi of the city. The Qazi turned to Mati Das first and asked him to embrace Islam. He refused to do so. He was condemned to an instantaneous death.

The executioners were called and the Guru and all the three of his companions were made to sit at the place of the execution. Bhai Mati Das approached the Guru with folded hands and asked for his blessings, saying that he was happy to be the first to achieve martyrdom.

The Guru blessed him telling that they must resign themselves cheerfully to the will of the Lord. He praised him for his lifelong single-minded devotion to him and his cause. With tears in his eyes, he bade him farewell saying his sacrifice would occupy an abiding place in history. Mati Das touched the Guru's feet, embraced his friend and brother, and came to his place.

Mati Das while standing erect was tied between two posts. He was asked if he had any parting words, to which Mati Das answered, "I request only that my head be turned toward my Guru as I am executed." Two executioners placed a double-handed saw on his head. Mati Das serenely uttered "Ek Onkar" and started reciting the Japji Sahib, the great morning prayer of the Sikhs. He was sawn across from head to loins. It is said that even as the body was being sawn into two, the Japji continued to reverberate from each part until it was all over.

Dyal Das abused the Emperor and his courtiers for this infernal act. He was tied up like a round bundle and thrown into a huge cauldron of boiling oil. He was roasted alive into a block of charcoal. Sati Das condemned these brutalities. He was wrapped in cotton and set to fire. The Guru witnessed all this savagery with divine calm.

In recognition of the devotion and supreme sacrifice made by Mati Das, Guru Teg Bahadur bestowed the title of Bhai on him. In course of time, all Chhibbers belonging to the village of Karyala adopted this title.

Bhai Mati Das occupies a premier position in the pantheon of Sikh martyrs.