Bhama shah was born in 1542 and belonged to Shrimali Gotra in Oswal caste. His father Bharmal was Qiledar of Ranthambore Fort appointed by Rana Sanga and was later prime minister under Maharana Udai Singh.

Bhama shah was a great general, adviser, minister of Mewar, who was later promoted to post of Prime Minister of Mewar by Maharana Pratap, to whom he served as close aide and confidant.[2] He along with his younger brother Tarachand fought in several battles for Mewar. Tarachand who was four years younger to Bhama shah was also an able administrator, valiant fighter and commanded the forces of Mewar on several occasions like his elder brother Bhamashah.[2]

Both of them were noted for their statesmanship, war skills, patriotism and generosity.

After Battle of Haldighati, when Maharana Pratap had no resources at all to carry on the fight. At this point of time, Bhama shah and his brother Tarachand,[2] presented their wealth consisting of 20,000 gold coins and 2,500,000 rupees[2] to Pratap, who was overwhelmed. They, being skilled in war skills and patriotism, attacked Mughal army camps and won a lot of wealth from Mughals; from which they partially financed Pratap. With this help Pratap could organize an army and carried on his further fights against Mughals.

Bhama shah was promoted to the post Prime Minister, by Maharana Pratap. Whereas, Tarachand was appointed as a Governor of 'Godwad' after the battle of Haldighati in which he also fought bravely side by side of BhamaShah.

Tarachand governed the region of 'Godwad' very ably upto the time of his death. He was given an independent charge of this region and hence was bestowed the title of 'Thakur'. 'Sadri' was founded by Tarachand where he had constructed many buildings. 'Sadri' is considered as gate way of Mewar to Marwar.[2] 400px

Bhama shah died in 1600 at the time of his death he was in-charge of Mewar's treasury under Amar Singh I. Descendants of Bhamashah also served as prime ministers of the Maharanas of Udaipur for a few generations. His descendants still live in Udaipur.

There is a memorial in Udaipur in honour of the great patriot.

Government of India has issued a postage stamp in his honor in year 2000.[3] 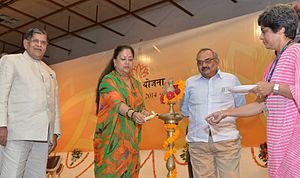 The Bhama shah Award is a State Award. This award was instituted to honour students achieving the top position by securing the highest percentage in select facilities from amongst all the universities of Rajasthan, in recognition of selfless sacrifice, astute financial management, and devotion to duty. The Annual State Award consists of a cash award of ₹2,001 (US$30), a commemorative medal and a Merit certificate.[4]