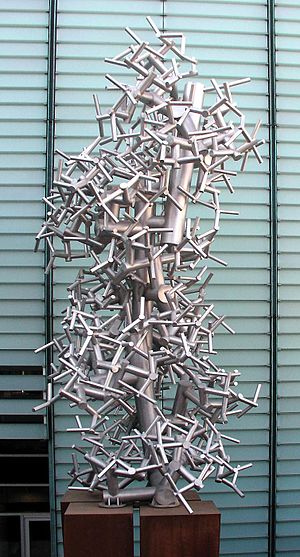 BAnQ's mandate is to offer democratic access to culture and knowledge. To this end, it brings together, preserves and promotes Québec's and Québec-related heritage materials, and also provides the services of a major public library. BAnQ carries out its mandate in 12 facilities which are open to the public: the Grande Bibliothèque, BAnQ Vieux-Montréal and BAnQ Rosemont–La Petite-Patrie in Montréal; BAnQ Gaspé, BAnQ Gatineau, BAnQ Québec, BAnQ Rimouski, BAnQ Rouyn-Noranda, BAnQ Saguenay, BAnQ Sept-Îles, BAnQ Sherbrooke and BAnQ Trois-Rivières.

The library's collection includes legal deposit copies of all works printed in Quebec, concerning Quebec, or written or contributed to by an author from Quebec.[1]

The purpose of the institution was to process historical materials, more specifically public archives and the Québec government's archives, and to collect documents pertaining to the history of Québec.

The Archives nationales du Québec (as they were called in 1970) were brought under the jurisdiction of the Department of Cultural Affairs in 1961. Until 1963, the institution was called Archives de la province de Québec.

On August 12, 1967, the National Assembly of Québec legislated to establish the Bibliothèque nationale du Québec (BNQ), an institution that would also come under the Department of Cultural Affairs. Originally, the BNQ held the collections and furniture of the Bibliothèque Saint-Sulpice, located in Montréal. Its creation by the Sulpician Order dated back to 1915. The library belonged to the Québec government since 1941.

In 1968, the provincial regulation on legal deposit came into effect requiring that Québec publishers deposit with the BNQ two copies of their printed works, i.e. books, brochures, newspapers, magazines and journals, artists' books and musical scores.

Iris, an online catalogue, was made available to the public in 1994. It provides free access to a description of every item held in the library.

In 1997, the idea of creating a Grande Bibliothèque was born out of the desire to provide widespread availability to the materials of the BNQ and of the Bibliothèque centrale de Montréal. The institution founded to create a major public library, called Grande bibliothèque du Québec (GBQ), was merged with the BNQ in 2002: the new entity kept the name Bibliothèque nationale du Québec and pursued two separate mandates: the acquisition, preservation and promotion of the National collection, and the acquisition and promotion of the circulating collection for the general public.

The construction work of the Grande Bibliothèque took place from 2001 to 2004 in downtown Montréal.

On 29 April, the Grande Bibliothèque was formally inaugurated. The next two days were dedicated to public tours. On Tuesday, 3 May, it began its operations.

Another of BAnQ's mission is to provide democratic access to the heritage material constituted by its collections, to culture and universal knowledge, and to act, in this respect, as a catalyst for the library and information institutions of Québec, thus contributing to the fulfilment of its citizens.

More specifically, BAnQ pursues the following objectives: attach great value to reading, research and the advancement of knowledge, promote Québec publishing, foster continuing self-training, be instrumental in the integration of newcomers to Québec, strengthen cooperation and exchanges between libraries and encourage Québec's participation in the development of the virtual library.

BAnQ also aims to provide structure, support and advise public bodies regarding the management of their materials, ensure the preservation of public archives, make them more accessible and boost their visibility. The institution is also responsible for promoting the preservation and accessibility of private archives.

To this end, BAnQ carries out the responsibilities provided under the Archives Act. In the archival field, the institution can also provide research support services and contribute to the development and international outreach of Québec heritage materials and expertise.

BAnQ serves as the official representative of the Agence francophone pour la numérotation internationale du livre (AFNIL) regarding the assignment of ISBN prefixes in Québec and Canada.

BAnQ is responsible for acquiring, processing, preserving and highlighting the heritage collections. These collections bring together the entire production of printed materials in Québec, mostly through legal deposit, and of Québec-related materials. The Preservation Branch (Direction générale de la conservation) which handles this aspect of the institution's mission, operates out of BAnQ Rosemont–La Petite-Patrie, in Montréal. Designed to ensure the long-term preservation of the materials stored there, the facility also houses BAnQ's head office. Patrons can access the heritage collections' materials in the reading room of the Collection nationale, located in the Grande Bibliothèque. The special collections, however, can be viewed on site at BAnQ Rosemont–La Petite-Patrie.

The Montréal facility is housed in the Gilles-Hocquart building, formerly the Hautes Études commerciales building, on Avenue Viger. The Québec facility is located in the Louis-Jacques-Casault pavilion on the Université Laval campus.

Located in the Quartier latin, in the heart of Montréal, the Grande Bibliothèque is the flagship library facility of Bibliothèque et Archives nationales du Québec. This major public library was specifically designed to encourage the discovery and exploration of BAnQ's collections with free and open access. Materials from the universal collection are available for circulation. The building, each of its six levels fostering a different atmosphere, opened to the public in 2005. Its patrons include scholars and the general public alike. It welcomes close to 50,000 visitors each week.