From Infogalactic: the planetary knowledge core
Jump to: navigation, search
Not to be confused with Bigotry. 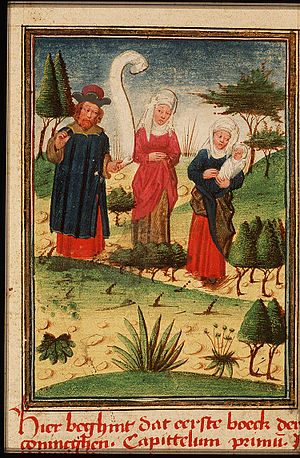 Elkanah and his two wives, Hannah and Peninnah.

In cultures that practice marital monogamy, bigamy is the act of entering into a marriage with one person while still legally married to another.[1] Bigamy is a crime in most western countries, and when it occurs in this context often neither the first nor second spouse is aware of the other.[2][3] In countries that have bigamy laws, consent from a prior spouse makes no difference to the legality of the second marriage, which is usually considered void.

Before Christianity became the official religion of the Roman Empire, Diocletian and Maximilian passed strict anti-polygamy laws in 285 AD that mandated monogamy as the only form of legal marital relationship, as had traditionally been the case in classical Greece and Rome.[citation needed] In 393, the Byzantine Emperor Theodosius I issued an imperial edict to extend the ban on polygamy to Jewish communities. In 1000, Rabbi Gershom ben Judah ruled polygamy inadmissible within Ashkenazi Jewish communities, living in a Christian environment.

According to feminist historian Sarah McDougall, the Christian European insistence on monogamy and its enforcement arose as a consequence of 16th Century Islamic incursions into Central Europe and the advent of European colonialism within the Americas, Africa and Asia, which exposed European Christians to cultures that practised polygamy. As a consequence, nominal Christian male bigamists were subjected to unprecedented harsh punishments, such as execution, galley servitude, exile, and prolonged imprisonment. McDougall argues that female bigamists were not as harshly punished due to women's perceived absence of moral agency.[4]

In diplomatic law, consular spouses from polygamous countries are sometimes exempt from a general prohibition on polygamy in host countries. In some such countries, only one spouse of a polygamous diplomat may be accredited, however.[6]