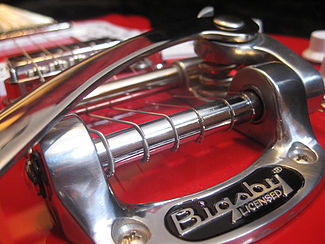 The Bigsby vibrato tailpiece (or Bigsby for short) is a type of mechanical vibrato device for electric guitar designed by Paul A. Bigsby. The device allows musicians to bend the pitch of notes or entire chords with their pick hand for various effects.

The Bigsby was the first successful design of what is now called a whammy bar, vibrato bar, or tremolo arm, the latter a misnomer since vibrato is the technically correct term for the musical effect it produces (tremolo is a rapid fluctuation of the volume of a note, while vibrato is a fluctuation in pitch). The origin of this nonstandard usage of the term by electric guitarists is attributed to Leo Fender, who also used the term "tremolo" to refer to what is really a vibrato effect (see vibrato unit).

The arm may also be lifted to raise the pitch of the strings. The Bigsby is highly controllable within its range of motion and usually requires little force to operate. It is ideally suited to musicians who use slow, subtle, or extended bends. It has limited range compared to vibrato units using longer springs contained internally. Competing units, like the Floyd Rose and the Fender synchronized tremolo (or strat-style) are therefore preferred by some players.

Bigsby vibratos are still factory installed on a variety of electric guitars, including certain instruments branded as PRS (Starla), Epiphone, Fender, Gibson, Gretsch, Guild, Hamer, Ibanez, Schecter Guitar Research as well as luthiers companies such as Motor Ave. Many electric guitars can also be retrofitted with a Bigsby, which requires no additional routing, but may require additional holes to be drilled. Adapters, such as the models sold by Vibramate, can be used to install a Bigsby Vibrato on a guitar without drilling any holes. Variations in guitars, such as between flat top and archtop, require different models of Bigsby. Bigsby units ship with their own roller bridges, though these are often discarded in favor of more adjustable alternatives such as the Tune-o-matic style bridge or Jazzmaster style bridge. The roller bridges that come with the Bigsby do not offer individual string intonation adjustment, and have relative string length preset for string sets with a wound G string, rather than for the plain G string preferred by many electric guitarists today.