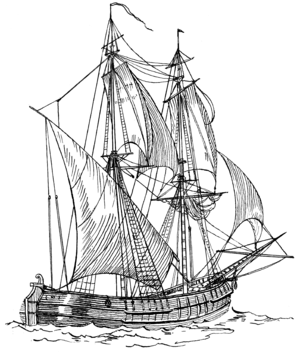 An illustration of a bilander

A bilander, also spelled billander or bélandre, was a small European merchant ship with two masts, used in the Netherlands for coast and canal traffic and occasionally seen in the North Sea but more frequently to be seen in the Mediterranean Sea. The mainmast was lateen-rigged with a trapezoidal mainsail, but the foremast carried the conventional square course and square topsail. Displacement was typically under 100 tons. The bilander was short-lived, being replaced by more efficient designs, and few examples exist today. The word bilander comes from the Dutch and literally means "by-lander" because it was used on canals.