William McGuire "Bill" Bryson, OBE, FRS (/ˈbraɪsən/; born December 8, 1951) is a best-selling Anglo-American author of humorous books on travel, as well as books on the English language and science. Born in the United States, he was a resident of Britain for most of his adult life before returning to America in 1995. In 2003 Bryson and his wife and four children moved back to Britain, living in the old rectory of Wramplingham, Norfolk. He served as the chancellor of Durham University from 2005 to 2011.[1][2][3][4]

Bryson came to prominence in the United Kingdom with the publication of Notes from a Small Island (1995), an exploration of Britain, and its accompanying television series. He received widespread recognition again with the publication of A Short History of Nearly Everything (2003), a book widely acclaimed for its accessible communication of science.

Bryson was born in Des Moines, Iowa, the son of Agnes Mary (née McGuire) and sports journalist Bill Bryson, Sr. ("I come from Des Moines, Iowa. Somebody had to." — Bill Bryson, "The Lost Continent"). His mother was of Irish descent.[5] He had an older brother, Michael (1942–2012), and a sister, Mary Jane Elizabeth. In 2006 Bryson published The Life and Times of the Thunderbolt Kid, a humorous account of his childhood years in Des Moines.

Bryson attended Drake University for two years before dropping out in 1972, deciding instead to backpack around Europe for four months. He returned to Europe the following year with a high-school friend, the pseudonymous Stephen Katz. Some of his experiences from this trip were relived as flashbacks in Neither Here Nor There: Travels in Europe, which documents a similar journey Bryson made twenty years later.

Move to the United Kingdom 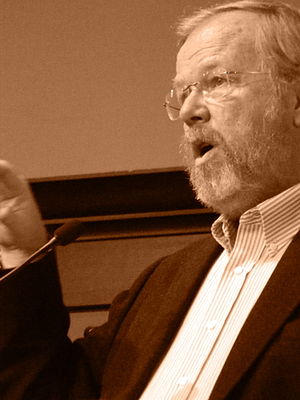 Bryson first visited Britain in 1973 during a tour of Europe[6] and decided to stay after landing a job working in a psychiatric hospital — the now-defunct Holloway Sanatorium in Virginia Water, Surrey. He met a nurse there named Cynthia Billen, whom he married. They moved to Bryson's hometown of Des Moines, Iowa in 1975 so that Bryson could complete his college degree at Drake University. In 1977 they settled in Britain, where they remained until 1995.[7]

Eventually living in North Yorkshire and mainly working as a journalist, Bryson became chief copy editor of the business section of The Times and then deputy national news editor of the business section of The Independent. He left journalism in 1987, three years after the birth of his third child. Living in Kirkby Malham, North Yorkshire, Bryson started writing independently and in 1990 their fourth child, Samuel, was born.

In 1995 Bryson returned to the United States to live in Hanover, New Hampshire, for some years. While there he wrote a column for a British newspaper for several years, reflecting on humorous aspects of his repatriation in America. These columns were selected and adapted to become his book I'm a Stranger Here Myself, alternatively titled Notes from a Big Country in Britain, Canada, and Australia. During his time in the United States, Bryson decided to walk the Appalachian Trail with his friend Stephen Katz (a pseudonym), about which he wrote the book A Walk in the Woods. In the 2015 film adaptation of A Walk in the Woods, Bryson is portrayed by Academy Award winner Robert Redford and Katz is portrayed by Nick Nolte (Bryson is portrayed as being much older than he was at the time of his actual walk).[10]

Also in 2003, in conjunction with World Book Day, British voters chose Bryson's book Notes from a Small Island as that which best sums up British identity and the state of the nation.[11] In the same year, he was appointed a Commissioner for English Heritage.

In 2004 Bryson won the prestigious Aventis Prize for best general science book with A Short History of Nearly Everything.[12] This 500-page popular science work explores not only the histories and current statuses of the sciences, but also reveals their humble and often humorous beginnings. Although one "top scientist" is alleged to have jokingly described the book as "annoyingly free of mistakes",[13] Bryson himself makes no such claim and a list of some reported errors in the book is available online.[14] In 2005, the book won the EU Descartes Prize for science communication.[12]

In November 2006, Bryson interviewed the then British prime minister, Tony Blair, on the state of science and education.[15]

In January 2007, Bryson was the Schwartz Visiting Fellow at the Pomfret School in Connecticut.[16]

In May 2007, he became the president of the Campaign to Protect Rural England.[17][18] His first area of focus in this role was the establishment of an anti-littering campaign across England. He discussed the future of the countryside with Richard Mabey, Sue Clifford, Nicholas Crane, and Richard Girling at CPRE's Volunteer Conference in November 2007. 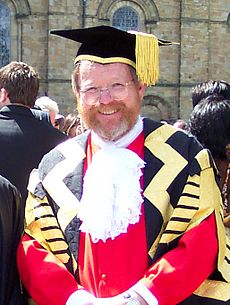 Bryson in the regalia of Chancellor of Durham University, with Durham Cathedral in the background

In 2005 Bryson was appointed chancellor of Durham University,[13] succeeding the late Sir Peter Ustinov, and became more active with student activities than is common for holders of that post, even appearing in a Durham student film and promoting litter picks in the city.[19] He had praised Durham as "a perfect little city" in Notes from a Small Island. He has also been awarded honorary degrees by numerous universities, including Bournemouth University (April 2002) and the Open University.[20]

In 2005 Bryson received the President's Award from the Royal Society of Chemistry for advancing the cause of the chemical sciences. In the same year, Bryson and the RSC jointly created the Bill Bryson prize, an annual award to encourage science writing in schools. [21]

In 2006 Frank Cownie, the mayor of Des Moines, awarded Bryson the key to the city and announced that 21 October 2006 would be known as "Bill Bryson, The Thunderbolt Kid, Day".[22]

On 13 December 2006, Bryson was awarded an honorary OBE for his contribution to literature.[23] The following year, he was awarded the James Joyce Award by the Literary and Historical Society of University College Dublin.

In October 2010, it was announced that Bryson would be stepping down from the role of chancellor at Durham University at the end of 2011.[25]

On 13 November 2012, Bryson was awarded an honorary doctorate from King's College London. According to King's site, the award was relating to: "Bill Bryson OBE: the UK's highest-selling author of non-fiction, acclaimed as a science communicator, historian and man of letters."[26] 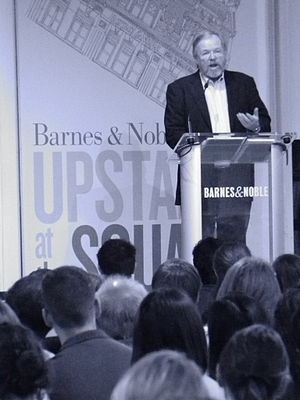 On 22 November 2012, Durham University officially renamed the Main Library the Bill Bryson Library for his outstanding contributions as the University's 11th Chancellor (2005–11).[27][28]

Bryson was elected an Honorary Fellow of the Royal Society (FRS) in 2013,[29] becoming the first non-Briton upon whom this honour has been conferred.[30][31] His biography at the Society reads:

Bryson has written the following books: