William Mark "Bill" Peduto[5] (born October 30, 1964) is an American politician who served as the 60th Mayor of Pittsburgh. A member of the Democratic Party, he previously served as a member of the Pittsburgh City Council from 2002 until 2014.

Prior to being elected to City Council, Peduto attended Pennsylvania State University, from which he dropped out before later completing his degree. He ran a consulting business and later served as Chief of Staff to his predecessor in City Council, Dan Cohen. Peduto was elected to City Council in 2001 and served from 2002 until 2014. During that time, he ran for Mayor of Pittsburgh three times. In 2005, he ran in the Democratic primary but was defeated by Bob O'Connor, who went on to become mayor in 2006. Peduto again ran in a 2007 special election following O'Connor's death; however, he dropped out before the primary. He ran for mayor for a third time in 2013, this time winning the Democratic nomination and emerging victorious.

In the 2013 election, Peduto defeated opponents Joshua Wander and Lester Ludwig, winning 84% of the vote. After being elected Mayor to succeed the outgoing Luke Ravenstahl, Peduto was inaugurated in January 2014.

Bill Peduto was born on October 30, 1964, and graduated from Chartiers Valley High School in 1983. After one year at Carnegie Mellon University, Peduto transferred to Pennsylvania State University, pursuing a degree in political science. He dropped out, however, before completing the degree requirements. In 2007, Peduto returned to finish his degree requirements and became the only member of the nine-member Pittsburgh City Council at the time to have a bachelor's degree.[6] Later, he received a master's degree in public policy and management from the University of Pittsburgh.[6][4][7]

Peduto operated a political consulting business and served as general consultant, campaign manager, finance director and other roles for several Democratic candidates and elected officials. At 28, he served as a political director for then-acting Governor Mark Singel. He also worked in Washington, D.C. as an intern to then-U.S. Representative George Gekas.[7][8]

Prior to holding a seat on city council, Peduto served as chief of staff to former City Councilman Dan Cohen. In 1996 Peduto was Cohen's campaign manager in a challenge to former U.S. Representative Bill Coyne in the Democratic primary. Peduto is reported to have urged Cohen to make an issue of Coyne's record.[9] The Cohen campaign's subsequent use of negative advertising backfired and contributed to a landslide defeat.[10] 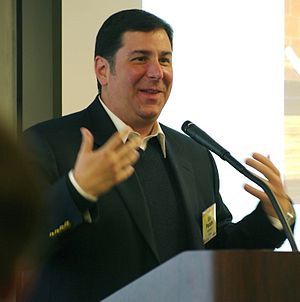 Peduto speaks at the Art Institute of Pittsburgh, 2009.

In the 2001 election, Bill Peduto ran for the Pittsburgh City Council District 8 seat being vacated by Dan Cohen, which represents the East End neighborhoods of Bloomfield, Friendship, Oakland, Point Breeze, Shadyside and Squirrel Hill. After being elected to a four-year term, he assumed office in January 2002. He was subsequently re-elected to two additional terms in 2005 and 2009.[7]

On City Council, he chaired the Committee on General Services, Technology and the Arts. The Committee is in charge of all contracts and purchases as well as city owned buildings and land. Peduto also oversaw the City Information Systems department, the Cable Bureau and the Art Commission on Council. Peduto describes himself as a proponent of progressivism and as a "Reform Democrat."[11] He was named one of "100 New Democrats to Watch" by the Democratic Leadership Council in 2003 and one of National Journal's "PA Up and Comers" in 2004 and 2006.[12]

Peduto launched his first campaign for Mayor of Pittsburgh in the 2005 mayoral election. He was defeated in the primary, however, by eventual general election winner Bob O'Connor. In 2006, following O'Connor's death, City Council President Luke Ravenstahl became Mayor. In his second bid for Mayor, Peduto mounted a primary challenge to Ravenstahl in the 2007 special election. Peduto ended his campaign before the primary, however, acknowledging Ravenstahl's relative popularity at the time.[13] Peduto faced criticism for this decision from the Pittsburgh Post-Gazette editorial board, which accused him of "political cowardice."[14]

Peduto became a political opponent of Ravenstahl's, opposing Ravenstahl's proposal to end Act 47 oversight of Pittsburgh's finances among other issues. After being re-elected to City Council in 2009, Peduto decided that he would again challenge the incumbent mayor in the 2013 Democratic primary.[7]

In December 2012, Peduto officially launched his third mayoral campaign, announcing that he would challenge Luke Ravenstahl in the 2013 mayoral primary, and was immediately endorsed by Allegheny County Executive Rich Fitzgerald. He simultaneously announced that he would not seek re-election to a fourth term on City Council.[15] Ravenstahl announced in March 2013 that he would not seek another term as Mayor.[16] Several other candidates launched campaigns but after Ravenstahl's exit, the race evolved into a two-way race between Peduto and former Pennsylvania Auditor General Jack Wagner. In the May 21 primary, Peduto defeated his opponents, receiving 52% of the vote. Wagner, his closest challenger, received 40%.[17][18]

In November 2013, Peduto defeated Republican candidate Joshua Wander, who was residing in Israel at the time of the election, and independent candidate Lester Ludwig to be elected as the city's 60th mayor, receiving 84% of the vote. He was inaugurated on January 6, 2014.[1][2]

Peduto is an advocate for ride-sharing in Pittsburgh. After the Pennsylvania Public Utilities Commission issued cease-and-desist orders in July 2014, Peduto called on the state legislature to allow ride-sharing operators to legally operate in Pittsburgh.[19] Subsequently, ride-sharing service Lyft acquired temporary approval for operation in August 2014 pending a hearing regarding a permanent license.[20]

In July 2014, Peduto and the City of Pittsburgh dropped a lawsuit that his predecessor, Luke Ravenstahl, had launched against UPMC, challenging its tax-exempt status. Peduto indicated his belief that the lawsuit impeded progress in ongoing negotiations between UPMC and the city regarding the payment of taxes.[21]

In early September 2014, Peduto announced the hiring of Cameron McLay as Pittsburgh Chief of Police, which resulted from an extended search following the resignation and subsequent conviction of Nate Harper on charges of tax evasion and slush fund conspiracy.[22]

Peduto appeared on the CBS television series Undercover Boss in December 2014 as "Ed Chadwick." Following the premise of the show, Peduto disguised himself as a municipal worker to observe rank-and-file Pittsburgh employees. As is customary in the show, Peduto rewarded those whose performance was judged to be exemplary with monetary donations. These donations came from anonymous sources, since ethics laws bar the use of tax revenue. Common Cause Pennsylvania, a government watchdog group, called on the Peduto administration to disclose the donors shortly after the episode aired.[23][24]