Biloxi (/bəˈlʌksi/; bə-LUK-see), officially the City of Biloxi, is a city in Harrison County, Mississippi. The 2010 United States Census recorded the population as 44,054. Along with the adjoining city of Gulfport, Biloxi is a county seat of Harrison County.

The city is part of the Gulfport-Biloxi metropolitan area and the Gulfport-Biloxi-Pascagoula, Mississippi Combined Statistical Area. Pre-Katrina, Biloxi was the third largest city in Mississippi behind Jackson and Gulfport; with its population losses following that storm, it was passed by Hattiesburg and Southaven, so Biloxi is now ranked fifth in the state.

The beachfront of Biloxi lies directly on the Mississippi Sound, with barrier islands scattered off the coast and into the Gulf of Mexico. Keesler Air Force Base lies within the city and is home to the 81st Training Wing and the 403d Wing of the U.S. Air Force Reserve.

The first permanent settlement in French Louisiana was founded at Fort Maurepas, now in Ocean Springs, Mississippi, and referred to as Old Biloxi, in 1699 under the direction of Pierre Le Moyne d'Iberville, with Louisiana separated from Spanish Florida at the Perdido River near Pensacola (founded 1559 and again in 1698).

In 1720, the administrative capital of French Louisiana was moved to Biloxi (or Bilocci) from Mobile (or Mobille). French Louisiana (part of New France) was known in French as La Louisiane in colonial times, but in modern times is called "La Louisiane française" to distinguish from the modern state of Louisiana (also "Louisiane" in French).[1]

Due to fears of tides and hurricanes in the 18th century, the capital of French Louisiana was later moved by colonial governor Bienville, in 1723, from Biloxi to a new inland harbor town named La Nouvelle-Orléans (New Orleans), built for the purpose in 1718–1720.

British rule persisted from 1763 to 1779, and then Spanish rule from 1779 to 1810. Despite this, the character of Biloxi remained mostly French.[4] In 1811, Biloxi came under United States of America control as part of the Mississippi Territory. Mississippi, and Biloxi with it, were then admitted to the union in 1817.

Biloxi began to grow. It became a summer resort, with the advantages of close proximity to New Orleans and ease of access via water. Summer homes were built by well-to-do farmers and commercial figures. Hotels and rental cottages came into existence to serve those who could not afford their own homes.[4]

One of Biloxi's most known features has been the Biloxi Lighthouse, which was built in Baltimore and then shipped south and completed in May 1848.[5] (It and another are the only surviving lighthouses of twelve that once dotted the Mississippi Gulf Coast.[5])

In the early stages of the Civil War, Ship Island was captured by Union forces, which led to the effective Union capture of Biloxi as well. No major battles were fought in the area, and Biloxi did not suffer direct damage from the war.[4] Some local Union sentiment could be discerned following the war's conclusion.[5]

In the postbellum period, Biloxi again emerged as a vacation spot. Its popularity as a destination increased with railroad access. In 1881, the first cannery was built in the town, leading to others soon joining the location. Biloxi grew again, and as different ethnic groups came to work in the seafood factories, Biloxi gained a more heterogeneous population.[4] 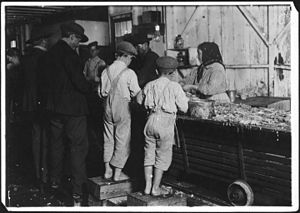 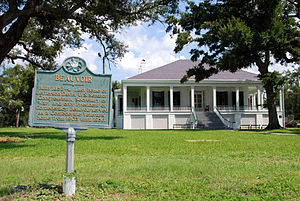 During World War II, the United States Army Air Forces built Keesler Field, now Keesler Air Force Base, which became a major basic training site and site for aircraft maintenance. The Biloxi economy boomed as a result,[6] again bringing more diverse groups to the area. By 1958, the first Jewish synagogue had been built in the town.[6]

Biloxi's casino history dates back to a period in the 1940s, when open, if technically illegal, gambling took place in a casino within the Broadwater Beach Resort.[7] Open gambling ended during the 1950s.[8] The Mississippi Gulf Coast became known as the "Poor Man's Riviera", and was frequented by Southern families interested in fishing expeditions during the summer.[9] Commercially, Biloxi was dominated by shrimp boats and oyster luggers.[9]

In 1959 Biloxi was the site of "Mississippi’s first public assault on racial barriers in its 15-year civil rights struggle"[10] when Gilbert Mason, a physician in Biloxi, went swimming at a local beach with seven other black friends. They were ordered to leave by a city policeman, who told them that "Negroes don't come to the sand beach."[11] This initiated a series of protests led by Mason, known as the Biloxi Wade-Ins. The protests were followed by the worst racial riot in Mississippi history and the death of ten people.[12] Ultimately, the protests led to the desegregation of the beaches of Biloxi.[11]

In the early 1960s, the Gulf Coast again emerged as a prime alternative to Florida as a southern vacation destination among Northerners, with Biloxi a center of the focus.[9] Biloxi hotels upgraded their amenities and hired chefs from France and Switzerland in an effort to provide some of the best seafood cuisine in the country.[9] Edgewater Mall was built in 1963.

With the introduction of legal gambling in Mississippi in the 1990s, Biloxi was again transformed.[6] It became an important center for casinos, and the hotels and complexes brought millions of dollars in tourism revenue to the city. The more famous casino complexes were the Beau Rivage casino resort, the Hard Rock Hotel and Casino (Biloxi), Casino Magic, Grand Casino, Isle of Capri Casino Resort Biloxi, Boomtown Casino, President Casino Broadwater Resort, and Imperial Palace. Like Tunica County in the northern part of the state, Biloxi and the surrounding Gulf Coast region was considered a leading gambling center in the Southern United States.

To celebrate the area's Tricentennial in 1998/99, the city's tourism promotion agency invited the nationally syndicated Travel World Radio Show to broadcast live from Biloxi, with co-host Willem Bagchus in attendance.

By the early 21st century, Biloxi's economy rested on the three prongs of seafood, tourism and gaming.[4] 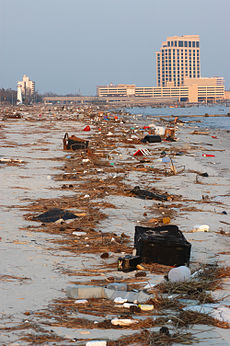 Biloxi beach near casinos, before cleanup 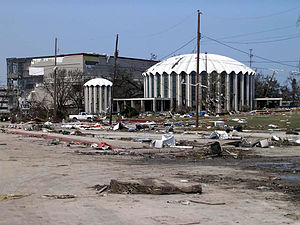 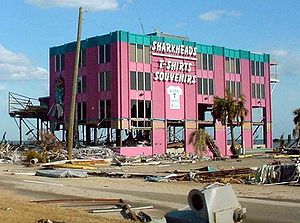 On August 29, 2005, Hurricane Katrina hit the Mississippi Gulf Coast with high winds, heavy rains and a 30-foot (9.1 m) storm surge, causing massive damage to the area. Katrina came ashore during the high tide of 6:56AM, +2.3 feet more.[14] Commenting on the power of the storm and the damage, Mayor A.J. Holloway said, "This is our tsunami."[15] Mississippi Governor Haley Barbour was quoted as saying the destruction of the Mississippi coastline by Hurricane Katrina looked like an American Hiroshima.

On the morning of August 31, 2005, in an interview on MSNBC, Governor Barbour stated that 90% of the buildings along the coast in Biloxi and neighboring Gulfport had been destroyed by the hurricane. Several of the "floating" casinos were torn off their supports and thrown inland, contributing to the damage.

Many churches were destroyed or severely damaged, including St. Michael's Catholic Church (see photo at right), which was gutted by the storm surge, breaking the entry doors and stained-glass windows along the first floor; however, the interior was later removed, and the structure was still solid enough to allow repairing the church.

Hurricane-force winds persisted for 17 hours and tore the branches off many coastal oak trees, but the tree trunks survived the 30-foot (9.1 m) flood and many have since regrown smaller branches. Some reconstructed homes still have the antebellum appearance, and miles inland, with less flooding, shopping centers have re-opened.

Harrison County Coroner Gary T. Hargrove told the mayor and City Council that Hurricane Katrina had claimed 53 victims in Biloxi, as of January 30, 2006. Of the 53 confirmed fatalities in Biloxi, a figure that includes one unidentified male, Hargrove said the average age was 58, with the youngest being 22 and the oldest 90; 14 were female and 39 were male.

Biloxi is also the site of a well-known memorial to the Katrina victims, built by the crew and volunteers of Extreme Makeover: Home Edition.[17]

Many casinos were damaged or destroyed by Hurricane Katrina. Of the casinos that were located in Biloxi, eight have reopened since Katrina. They are: the Grand Biloxi Casino Hotel Spa (formerly known as Grand Casino Biloxi), the Hard Rock Hotel & Casino, the Isle of Capri Casino and Resort, the Palace Casino Resort, the IP Casino Resort Spa (formerly known as Imperial Palace), Treasure Bay Casino, Boomtown Casino, and the Beau Rivage, which reopened on the first anniversary of Hurricane Katrina.[18]

Multiple plans have been laid out to rebuild the waterfront areas of Biloxi, and the federal government has recently announced that it is considering giving up to 17,000 Mississippi coast homeowners the option to sell their properties so that a vast hurricane-protection zone can be implemented.[19] Meanwhile, the city of Biloxi is rapidly implementing plans to allow the redevelopment of commercial properties south of highway 90.[20] 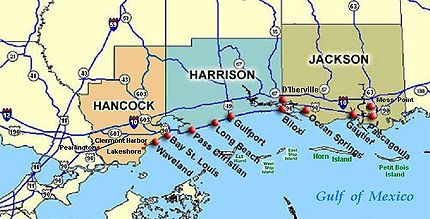 Location of Biloxi, Mississippi, east of Gulfport (center), on Gulf of Mexico.

Biloxi has a subtropical climate that is heavily influenced by the Gulf of Mexico. Winter days are mild and wet. Snow is extremely rare in Biloxi. Summers are hot and humid, bearing the brunt of tropical storms during the late summer to fall. Biloxi's record low of 10 °F (-12.2 °C) was recorded on January 24, 1963, and the record high of 104 °F (40 °C) was recorded on August 29, 2000.

In 2005, as a result of Hurricane Katrina, many Vietnamese Americans left Biloxi. In 2009 members of the Vietnamese community in Biloxi said that Vietnamese are coming back to Biloxi due to a poor economic scenario in other parts of the United States.[25]

Biloxi is home to several casino resort hotels, with 24-hour gambling, concert entertainment shows, and several restaurants. Some of the casino resorts include the following (dates reflect business status after Hurricane Katrina):[18] 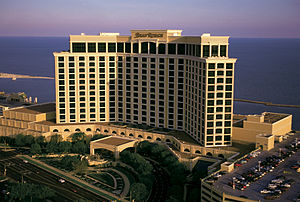 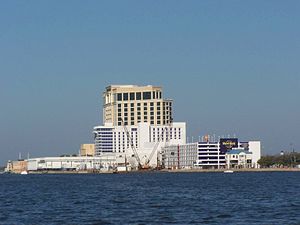 In the center of what fisheries biologists term "The Fertile Fisheries Crescent", Biloxi offers some of the finest sportsfishing along the entire northern coast of the Gulf of Mexico. Spotted seatrout, red drum, Spanish and king mackerel, flounder, snapper, grouper, sharks, and more are all available to anglers during the fishing season. It is not known how Hurricane Katrina affected this ecosystem.

The Huntsville Stars of the Class AA Southern League in Minor League Baseball were sold in January 2014 to an ownership group that plans to relocate the team to Biloxi for the 2015 season at a newly constructed stadium named MGM Park.[30]

Biloxi was the host city of the 2009 Women's World Military Cup. 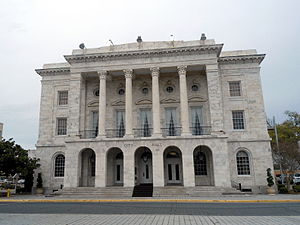 The Gulf Coast has a large Catholic school system, of whose schools Biloxi hosts fifteen.[35]

Virginia College has a campus that serves the greater Biloxi/Gulfport area.

Biloxi is served by the Gulfport-Biloxi International Airport in Gulfport, Mississippi.

Biloxi's main highway is U.S. Highway 90 (Beach Boulevard), which runs along the beach and by the casinos. It connects the city to Gulfport and points westward and to Ocean Springs and Pascagoula to the east. The Biloxi Bay Bridge, connecting Biloxi and Ocean Springs, was rebuilt after Hurricane Katrina, and was fully reopened in April 2008.

Interstate 10 passes through the northern sections of the city, connecting the city to L.A., Phoenix, Tucson, El Paso, San Antonio, Houston, TX, New Orleans, Mobile, Tallahassee and Jacksonville, FL. Interstate 110 splits off from I-10 at D'Iberville and heads south across the Back Bay of Biloxi to U.S. 90 near Beau Rivage, providing the city with an important hurricane evacuation route.

Other highways serving the area include: