From Infogalactic: the planetary knowledge core
Jump to: navigation, search
For other meanings, see Bindi. 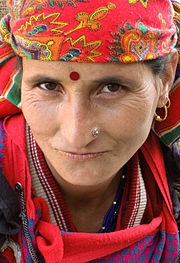 A bindi (Hindi: बिंदी, from Sanskrit bindu, meaning "point, drop, dot or small particle") is a red dot worn on the center of the forehead, commonly by Hindu women. The word Bindu dates back to the hymn of creation known as Nasadiya Sukta in Rig Veda[1] Bindu is considered the point at which creation begins and may become unity. It is also described as "the sacred symbol of the cosmos in its unmanifested state".[2][3] Bindi is a bright dot of red colour applied in the center of the forehead close to the eyebrow worn in South Asia (particularly India, Pakistan, Bangladesh, Nepal, Sri Lanka and Mauritius)[4] and Southeast Asia among Bali and Javanese Hindus. Bindi in Hinduism, Buddhism and Jainism is associated with Ajna Chakra and Bindu[5] is known as the third eye chakra and is linked to the pineal gland[clarification needed] which may inform a model of its envisioning.[6] Bindu is the point or dot around which the mandala is created, representing the universe.[7][8] Bindi has historical and cultural presence in the region of Greater India[9][10] 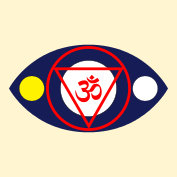 Ajna chakra has two lotus petals dedicated to the sun, the other to the moon (e.g. light and dark, or male and female) merged at the center.

Bindi and traditional head ornament with sun and moon pendants.

Traditionally, the area between the eyebrows (where the bindi is placed) is said to be the sixth chakra, ajna, the seat of "concealed wisdom". The bindi is said to retain energy and strengthen concentration.[11] The bindi also represents the third eye.[12] The Nasadiya Sukta of the Rig Veda, the earliest known Sanskrit text, mentions the word Bindu.[13]

The Ajna is symbolised by a sacred lotus with two petals, and corresponds to the colours violet, indigo or deep blue, though it is traditionally described as white. It is at this point that the two side nadi Ida (yoga) and Pingala are said to terminate and merge with the central channel Sushumna, signifying the end of duality, the characteristic of being dual (e.g. light and dark, or male and female). The seed syllable for this chakra is the syllable OM, and the presiding deity is Ardhanarishvara, who is a half male, half female Shiva/Shakti. The Shakti goddess of Ajna is called Hakini. In metaphysics, Bindu is considered the dot or point at which creation begins and may become unity. It is also described as "the sacred symbol of the cosmos in its unmanifested state."[14][15] Bindu is the point around which the mandala is created, representing the universe.[16] Ajna (along with Bindu), is known as the third eye chakra and is linked to the pineal gland[clarification needed] which may inform a model of its envisioning. The pineal gland is a light sensitive gland that produces the hormone melatonin which regulates sleep and waking up, and is also postulated to be the production site of the psychedelic dimethyltryptamine, the only known hallucinogen endogenous to the human body. Ajna's key issues involve balancing the higher and lower selves and trusting inner guidance. Ajna's inner aspect relates to the access of intuition. Mentally, Ajna deals with visual consciousness. Emotionally, Ajna deals with clarity on an intuitive level.[17] 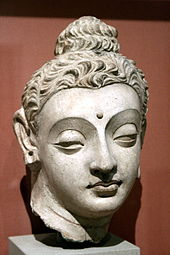 Buddha depicted with Ajna Bhrumadhya Bindu known as inner gaze. Bhrumadhya is the point in the center of the forehead commonly referred to as the third eye, or center of consciousness.[18]

In Hinduism, Buddhism and Jainism bindi is associated with Ajna Chakra and Bindu.[19] Divinities in these religions are typically depicted with Bhrumadhya Bindu, in meditative pose with their eyes nearly closed show the gaze focused between eyebrows, other spot being the tip of the nose – Naasikagra. The very spot between the eyebrows known as Bhrumadhya is where one focuses his/her sight, so that it helps concentration.[20] In South Asia, bindi is worn by women of all religious dispositions and is not restricted to religion or region. However, the Islamic Research Foundation, located in India, says "wearing a bindi or mangalsutra is a sign of Hindu women. The traditional bindi still represents and preserves the symbolic significance that is integrated into Indian mythology in many parts of India." 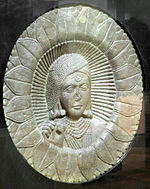 Relief from Stupa, 2nd century B.C. As decoration only female figures were marked with sacred lotus during this period.

The red bindi has multiple meanings which are all simultaneously valid— 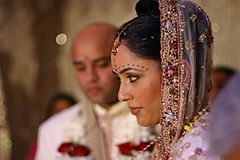 Ornamental bindis were made and sold by Lac workers known as Lakhera.[23]

A traditional bindi is red or maroon in colour. A pinch of vermilion powder applied skilfully with a ring-finger to make a perfect red dot. It takes considerable practice to achieve the perfect round shape by hand. A small annular disc aids application for beginners. First they apply a sticky wax paste through the empty centre of the disc. This is then covered with kumkum or vermilion and then the disc is removed to get a perfect round bindi. Various materials such as sandal, 'aguru', 'kasturi', 'kumkum' (made of red turmeric) and 'sindoor' (made of zinc oxide and dye) colour the dot. Saffron ground together with 'kusumba' flower can also work.[24] The bindi is no longer restricted in colour or shape.[25][26]

Historically, the ornamental bindi spangle consists of a small piece of lac over which is smeared vermilion, while above it a piece of mica or thin glass is fixed for ornament. Women wore large spangles set in gold with a border of jewels if they can afford it. The bindi was made and sold by lac workers known as Lakhera.[27] In Hinduism it's part of the Suhāg or lucky trousseau at marriages and is affixed to the girl’s forehead on her wedding and thereafter always worn as a rule.[26] Unmarried girls also wore small ornamental spangles on their foreheads. But before marriage it is optional and afterwards marriage it's compulsory. A widow was not allowed to wear bindi or any ornamentation associated with married women.[26] In modern times, self-adhesive bindis are available in various materials, usually made of felt or thin metal and adhesive on the other side. These are simple to apply, disposable substitutes for older lac tikli bindis. Sticker bindis come in many colors, designs, materials, and sizes. 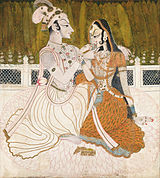 There are different regional variations of the bindi. In Maharashtra a large crescent shape bindi is worn with a smaller black dot underneath or above, associated with Bindu Chakra. In Bengal a large round red bindi is worn. In southern India a smaller red bindi is worn with a white tilak at the bottom and another common type is a red tilak shaped bindi. In Rajasthan the bindi is worn round and long tilak shaped bindi on some occasions. Decorative bindis have become popular among women in South Asia, regardless of religious background. Bindis are staple and symbolic for South Asian women. Apart from their cosmetic use, bindis have found a medical application too. Iodine patch bindis are being used among tribal women in north-west Maharashtra, India to battle iodine deficiency.[28] 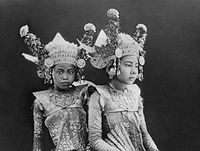 In addition to the bindi, in India, a vermilion mark in the parting of the hair just above the forehead is worn by married women as commitment to long-life and well-being of their husbands. During all Hindu marriage ceremonies, the groom applies sindoor on the parting in the bride's hair.[29]

Pottu is the application of a black dot kept on the forehead. Pottu can be a form of holistic medicine, in Indian traditions such as Siddha or Ayurveda, wherein herbs are heated until they turn black then made into a paste and applied to the forehead.[30]

In Bengal region, bride is decorated with Alpana design on forehead and cheeks, along with bindi.

In Southeast Asia Bindis are worn by Balinese and Javanese Hindus of Indonesia. Historically, it was worn by many Indianized kingdoms in Southeast Asia. Ancient Chinese women wore similar marks (for purely decorative purposes) since the second century, which became popular during the Tang Dynasty.[31][32] Common decorative design was of sacred lotus, most likely symbolizing Ajna.

Bindis are popular outside South Asia and Southeast Asia as well. They are worn purely for decorative purpose or style statement without any religious or cultural affiliation.[34] Decorative and ornamental bindis were introduced to other parts of the world by South Asian immigrants.[35] International celebrities such as Gwen Stefani, Julia Roberts,[36] Madonna,[37] Selena Gomez and many others have been seen wearing bindis.[38][39][40] The appropriateness of such uses has been disputed. Reacting to Gomez's appearance, Hindu leader Rajan Zed said that the bindi has religious significance and should not be used as a fashion accessory,[41] but Indian actress Priyanka Chopra praised Gomez's choice as "an embrace of Indian culture".[42]