From Infogalactic: the planetary knowledge core
Jump to: navigation, search
For other uses, see Bingley (disambiguation).

Bingley is a market town in the metropolitan borough of the City of Bradford, in West Yorkshire, England. It is situated on the River Aire and the Leeds and Liverpool Canal. The town has a population of 19,884 according to the 2001 Census.[1]

Local travel links include Bingley railway station in the town centre and Leeds Bradford International Airport, which is located 10 miles (16 km) from the city centre. The B6265 (Main Street), connecting Bingley to Keighley, runs through the town centre.

Historically a part of the West Riding of Yorkshire, Bingley appears in the Domesday Book of 1086 as "Bingheleia".

Bingley was probably founded about the time of the Saxons; certainly its name is Saxon in origin. Bingley was founded by a ford on the River Aire. This crossing gave access to Harden, Cullingworth and Wilsden on the south side of the river.

In the Domesday Book of 1086, Bingley is listed as "Bingheleia", with the following entry:

In Bingheleia, Gospatric has a manor of four carucate of land to be taxed, land for two ploughs. Ernegis de Burun has it and it is waste. In the time of King Edward the Confessor it was valued at four pounds. Woodland pasture two leagues long and one broad. All the manor is four long and two broad.

The ford was superseded by Ireland Bridge. In medieval times Bingley was a manor which extended several miles up and down the Aire valley, extending upstream to Marley on the outskirts of Keighley and downstream to Cottingley. Bingley became a market town with the grant of a Market Charter in 1212 by King John.

According to the poll tax returns of 1379, Bingley had 130 households, probably around 500 people. The nearby towns of Bradford, Leeds and Halifax had about half this population. At this time Bingley was the largest town in the area.

No records tell of how Bingley fared in the Black Death that swept Europe in the 14th century. Approximately one third of all the people in Europe died of this plague, sometimes wiping out whole towns and villages. According to the 1379 Poll tax records, the nearby town of Boulton had no survivors worth taxing. It seems Bingley may have got off relatively lightly.

In 1592 Bingley was shown on a map by Yorkshire map-maker Christopher Saxton as a single street with about 20 houses on each side. The church sits at the west end of the street opposite a single large house, possibly a manor house. Since Bingley was a market town, the market stalls would have been set up on either side of the main street. One of the oldest buildings in Bingley is a coaching inn, the Old White Horse Inn, situated on the flatter north bank of the River Aire by Ireland Bridge. 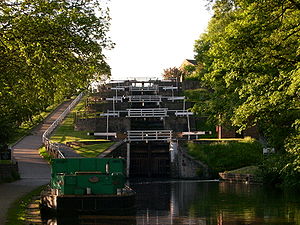 Like many towns in the West Riding, Bingley prospered during the Industrial Revolution. The Bingley section of the Leeds and Liverpool Canal was completed in 1774, linking the town with Skipton, and Bradford via the Bradford Canal. The canal passes through the town centre and ascends the side of the valley via the Bingley Five Rise and Bingley Three Rise Locks. Several woollen and worsted mills were built and people migrated from the surrounding countryside to work in the them. Many came from further afield such as Ireland in the wake of the Irish Potato Famine. A railway and line goods yard were constructed bringing further trade. During this period the villages of Gilstead and Eldwick became conurbated with Bingley. The Bingley Building Society was founded in this period. 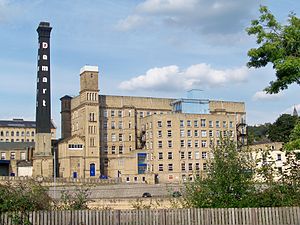 Bingley Teacher Training College opened in 1911 with Helen Wodehouse as principal. The first intake of students was 102 women from in and around the then West Riding of Yorkshire. Over the years until its closure in 1979 the college produced approximately 16,000 teachers.

The Beeching Axe demolished the goods yard, though the station which recently celebrated its centenary, still serves trains to Leeds, Bradford, Skipton, Morecambe and Carlisle. The textile mills have largely been closed. The Damart mill still stands and trades in textiles. Since 1995 the tannery, Bingley Mill & Andertons have been converted into flats. The most cramped and outdated terraced housing (in the opinion of the council) was partly replaced with council housing, Bingley Arts Centre and the headquarters of the Bradford & Bingley Building Society. Further council housing was built up the hill towards Gilstead including three tower blocks. In the wake of Margaret Thatcher's reforms of council housing much of the council estate was sold and a substantial portion has been knocked down and rebuilt as private housing. The Bingley Permanent Building Society merged with the Bradford Equitable Building Society to form the Bradford & Bingley Building Society (later a bank) in 1964. It was decided to site the corporate headquarters in Bingley. This brought several thousand jobs to the town but the building itself did not meet with universal acclaim. The building was demolished in spring 2015. The Bradford and Bingley collapsed in the 2008 credit crunch.

Bingley is famous for a number of reasons (Bradford & Bingley Building Society HQ, Damart, the Five Rise Locks), but its most famous son is Peter Sutcliffe, the Yorkshire Ripper.[2] Sutcliffe was later convicted of the murders of 13 women and the attempted murder of seven others.

Mark Rowntree, a spree killer, started his murderous campaign in Bingley before moving on to Eastburn and Leeds. He was convicted in 1976 of four murders.[3]

In 1966, a bookie by the name of Fred Craven was brutally murdered in his betting shop on Wellington Street Bingley. Mr Craven, who was well-known in the area because of his short stature (he was 4ft 7in tall) had gone into his shop to collect papers despite there being no racing that day. It is believed that he had £200 in his wallet (£3,200.00 in 2015 prices[4]) which went missing and Mr Craven suffered extensive injuries at the hands of the killer. Because the local constabulary had a very narrow time frame for the murder and the fact the killer must have been covered in blood, they anticipated a quick arrest. As of 2015, his murder remains unsolved.[5][6][7]

The main road through Bingley has been re-sited twice in its history. In 1904, a new cut of the road heading north west out of the town created a mini-bypass between All Saints Parish Church and the Railway. The cobbled road around the front of the church became 'Old Main Street'. A huge section of the graveyard was taken out to lay the new road and the gravestones were used as flags on the paths around the church. A small section of the graveyard still exists on the east side of the new road bounded by the old path to Treacle Cock Alley and the railway.[8]

Plans had been on the table for a trunk road through Bingley and the Aire valley since at least 1970.[9] In 1992 preparatory work was undertaken to lengthen Park Road bridge so that the Leeds Liverpool Canal could be moved slightly to the east. This work would allow the formation of the new road to be sandwiched between the railway and the canal. In 1998, the then Labour Government, gave the go ahead for the trunk road to be constructed.[9][10]

In 2004 the Bingley Relief Road opened. The £47.9 million road stretches from Crossflatts to Cottingley, threading through Bingley between the railway and the canal. One of the most expensive parts of the construction was moving a 160-yard (150 m) stretch of the canal. The construction involved the removal of Treacle Cock Alley pedestrian tunnel and the Tin Bridge, which have been replaced by the Three Rise Bridge, and the Britannia Bridge

The effect of the relief road on Bingley has been significant, particularly the noise in the Valley as a result of the overall increase in traffic and the much higher speeds. The previous 36,000 vehicles per day through Main Street reduced significantly. In 2004 the average home price in Bingley rose 30% to £196,850 - the second fastest appreciating area in the UK (after the nearby Hebden Bridge[11]). This shows Bingley is increasingly being seen as an attractive place to live, especially as a base for commuting to Bradford and Leeds.

The full effect of the change in traffic flow has yet to be fully realised, particularly the big increase in congestion that has resulted in neighbouring Saltaire and elsewhere. There are plans for the pedestrianisation of Main Street and the retail sector in general is undergoing a shift reflecting the changing demographics of the town with more beauty, fashion and tourist shops being opened. A new town square was built and opened in December 2007. The redesigned Myrtle Walk shopping precinct was opened in October 2009, currently housing the library and a number of retail stores.

The road was a target of road protest camp where protesters occupied tree houses for nearly two years.[12]

Bingley was part of the Wapentake of Skyrack, which was in turn part of the West Riding of Yorkshire. The ancient parish of Bingley included the chapelry of Morton and several other hamlets, including Cullingworth.[13] In 1866 the parish was divided into the new civil parishes of Bingley and Morton. In 1898 Bingley Urban District was formed. In 1974 the urban district and civil parish were abolished and absorbed into the City of Bradford Metropolitan District in the new county of West Yorkshire. Bingley became a ward in the Bradford metropolitan district. 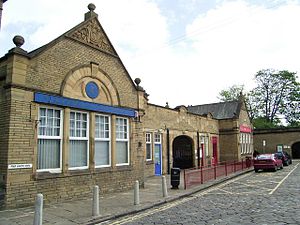 The Airedale Line, part of the Metro (West Yorkshire) railway network passes through Bingley. It is operated by Northern Rail. Bingley railway station still has many historical features.

The Leeds and Liverpool Canal passes through Bingley. There are several flights of locks in the Bingley section, the famous Five Rise Locks, the smaller Three Rise and a further two lock flight at Dowley Gap. The canal climbs steeply up the side of the Aire valley through this section.

As with all of the United Kingdom, Bingley experiences a maritime climate, characterised cool to mild weather, with often cloudy and damp conditions. This is amplified by Bingley's hilly northern situation. The nearest official met office weather station for which data is available is 'Bingley No. 2", actually located a couple of miles south of the town centre and at a relatively high 262 metres above sea level - More elevated than all of the urbanized area of Bingley. It is therefore likely that temperatures in central Bingley, at as little as 80 metres above sea level, tend to be 1 to 1.5°C milder year round - though on cold clear nights this may be reversed as a temperature inversion takes hold.

Bradford City Council organises an annual music festival, Bingley Music Live in Myrtle Park. The festival evolved from Music At Myrtle and features a range of musical genres including rock, alternative rock, indie rock and pop music. It is held at the end of August, with one of the days having free admission. First held in 2007, it was shortlisted in the ‘Best New Festival’ category of the Virtual Festival Awards.[17] The ethos of the event is to present high quality music at an affordable price and give a platform for local bands from across West Yorkshire to a large audience.[18] Artists such as The Charlatans, Happy Mondays, Scouting for Girls, The Automatic, Echo & The Bunnymen, Doves, The Zutons, Editors, Calvin Harris, James, The Enemy, Seasick Steve and Professor Green have performed at Bingley Music Live since 2007.

Each year Bingley Show is held in Myrtle Park and is one of the largest one day shows in Europe. [19] Its focus is on the horticultural and agricultural nature that reflects Bingley and its environs. The Bingley show has been held every year since 1867 apart from in 2012 when the event was cancelled due to flooding.

Bingley Little Theatre is both a venue and a major amateur group, with eight productions a year as well as studio pieces.

The first Airedale Terrier was bred in Bingley.