Biocompatibility is related to the behavior of biomaterials in various contexts. The term refers to the ability of a material to perform with an appropriate host response in a specific situation.[1] The ambiguity of the term reflects the ongoing development of insights into how biomaterials interact with the human body and eventually how those interactions determine the clinical success of a medical device (such as pacemaker, hip replacement or stent). Modern medical devices and prostheses are often made of more than one material so it might not always be sufficient to talk about the biocompatibility of a specific material.[2]

Biocompatibility (biomedical therapy): Ability of a material to perform with
an appropriate host response in a specific application.[5][lower-alpha 1]

Biocompatibility: Ability to be in contact with a living system without producing
an adverse effect.[5] 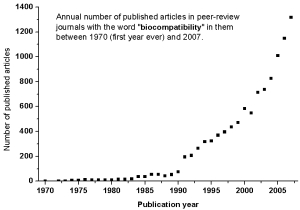 The word biocompatibility seems to have been mentioned for the first time in peer-review journals and meetings in 1970 by RJ Hegyeli (Amer Chem Soc Annual Meeting abstract) and CA Homsy et al. (J Macromol Sci Chem A4:3,615, 1970). It took almost two decades before it began to be commonly used in scientific literature (see the graph below).

Recently Williams (again) has been trying to reevaluate the current knowledge status regarding what factors determine clinical success. Doing so notes that an implant may not always have to be positively bioactive but it must not do any harm (either locally or systemically) (Williams, 2008).

Comments on the above five definitions

All these definitions deal with materials and not with devices. This is a drawback since many medical devices are made of more than one material. Much of the pre-clinical testing of the materials is not conducted on the devices but rather the material itself. But at some stage the testing will have to include the device since the shape, geometry and surface treatment etc. of the device will also affect its biocompatibility.

In the literature, one quite often stumbles upon the adjective form, ‘biocompatible’. However, according to Williams’ definition, this does not make any sense because biocompatibility is contextual, i.e. much more than just the material itself will determine the clinical outcome of the medical device of which the biomaterial is a part. This also points to one of the weaknesses with the current definition because a medical device usually is made of more than one material.

The scope of the first definition is so wide that D Williams tried to find suitable subgroups of applications in order to be able to make more narrow definitions. In the MDT article from 2003 the chosen supgroups and their definitions were:

Biocompatibility of short-term implantable devices
The biocompatibility of a medical device that is intentionally placed within the cardiovascular system for transient diagnostic or therapeutic purposes refers to the ability of the device to carry out its intended function within flowing blood, with minimal interaction between device and blood that adversely affects device performance, and without inducing uncontrolled activation of cellular or plasma protein cascades.

Biocompatibility of tissue-engineering products
The biocompatibility of a scaffold or matrix for a tissue-engineering products refers to the ability to perform as a substrate that will support the appropriate cellular activity, including the facilitation of molecular and mechanical signalling systems, in order to optimise tissue regeneration, without eliciting any undesirable effects in those cells, or inducing any undesirable local or systemic responses in the eventual host.

In these definitions the notion of biocompatibility is related to devices rather than to materials as compared to top three definitions. There was a consensus conference on biomaterial definitions in Sorrento September 15–16, 2005.[11]