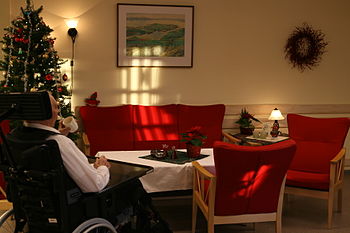 Old man at a nursing home in Norway.

Biodemography is a multidisciplinary approach, integrating biological knowledge (studies on human biology and animal models) with demographic research on human longevity and survival. Biodemographic studies are important for understanding the driving forces of the current longevity revolution (dramatic increase in human life expectancy), forecasting the future of human longevity, and identification of new strategies for further increase in healthy and productive life span.

The Compensation law of mortality (late-life mortality convergence) states that the relative differences in death rates between different populations of the same biological species are decreasing with age, because the higher initial death rates are compensated by lower pace of their increase with age.

The Late-life mortality deceleration law states that death rates stop increasing exponentially at advanced ages and level-off to the late-life mortality plateau. An immediate consequence from this observation is that there is no fixed upper limit to human longevity — there is no special fixed number, which separates possible and impossible values of lifespan. This challenges the common belief[1][2] in existence of a fixed maximal human life span.

As for the future of human longevity, biodemographic studies found that evolution of human lifespan had two very distinct stages – the initial stage of mortality decline at younger ages is now replaced by a new trend of preferential improvement of the oldest-old survival. This phenomenon invalidates methods of longevity forecasting based on extrapolation of long-term historical trends.

A general explanation of these biodemograhic laws of aging and longevity has been suggested based on system reliability theory.