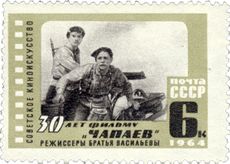 A biographical film, or biopic (/ˈbaɪoʊpɪk/;[1] abbreviation for biographical motion picture), is a film that dramatizes the life of a non-fictional or historically-based person or people. Such films show the life of a historical person and the central character's real name is used.[2] They differ from films "based on a true story" or "historical drama films" in that they attempt to comprehensively tell a single person's life story or at least the most historically important years of their lives.[original research?]

Because the figures portrayed are actual people, whose actions and characteristics are known to the public (or at least historically documented), biopic roles are considered some of the most demanding of actors and actresses.[citation needed] Ben Kingsley, Johnny Depp, Jim Carrey, and Jamie Foxx all gained new-found respect as dramatic actors after starring in biopics:[citation needed] Ben Kingsley as Mahatma Gandhi in Gandhi (1982), Depp as Ed Wood in Ed Wood (1994), Carrey as Andy Kaufman in Man on the Moon (1999), Foxx as Ray Charles in Ray (2004), and Eddie Redmayne as Stephen Hawking in The Theory of Everything (2014).

In rare cases, sometimes called auto biopics,[3] the subject of the film plays himself or herself: Jackie Robinson in The Jackie Robinson Story; Muhammad Ali in The Greatest; Audie Murphy in To Hell and Back; Patty Duke in Call Me Anna; Bob Mathias in The Bob Mathias Story, Arlo Guthrie in Alice's Restaurant; Fantasia Barrino in Life Is Not a Fairytale; and Howard Stern in Private Parts.

Biopic scholars include George F. Custen of the College of Staten Island and Dennis P. Bingham of Indiana University – Purdue University Indianapolis. Custen, in Bio/Pics: How Hollywood Constructed Public History (1992), regards the genre as having died with the Hollywood studio era, and in particular, Darryl F. Zanuck.[4] On the other hand, Bingham's 2010 study Whose Lives Are They Anyway? The Biopic as Contemporary Film Genre[5] shows how it perpetuates as a codified genre using many of the same tropes used in the studio era that has followed a similar trajectory as that shown by Rick Altman in his study, Film/Genre.[6] Bingham also addresses the male biopic and the female biopic as distinct genres from each other, the former generally dealing with great accomplishments, the latter generally dealing with female victimization. Ellen Cheshire's Bio-Pics: a life in pictures (2014) examines UK/US films from the 1990s and 2000s. Each chapter reviews key films linked by profession and concludes with further viewing list.[7] Christopher Robé has also written on the gender norms that underlie the biopic in his article, "Taking Hollywood Back" in the 2009 issue of Cinema Journal.[8] Roger Ebert defended The Hurricane and distortions in biographical films in general, stating "those who seek the truth about a man from the film of his life might as well seek it from his loving grandmother. ... The Hurricane is not a documentary but a parable."[9]

Some biopics purposely stretch the truth. Confessions of a Dangerous Mind was based on game show host Chuck Barris' widely debunked yet popular memoir of the same name, in which he claimed to be a CIA agent.[10] Kafka incorporated both the life of author Franz Kafka and the surreal aspects of his fiction.[citation needed] The Errol Flynn film They Died with Their Boots On tells the story of Custer but is highly romanticized. The Oliver Stone film The Doors, mainly about Jim Morrison, was highly praised for the similarities between Jim Morrison and actor Val Kilmer, look-wise and singing-wise, but fans and band members did not like the way Val Kilmer portrayed Jim Morrison,[11] and a few of the scenes were even completely made up.[12]

Casting can be controversial for biographical films. Casting is often a balance between similarity in looks and ability to portray the characteristics of the person. Anthony Hopkins felt that he should not have played Richard Nixon in Nixon because of a lack of resemblance between the two.[citation needed] The casting of John Wayne as Genghis Khan in The Conqueror was objected to because of the American Wayne being cast as the Mongol warlord. Egyptian critics criticized the casting of Louis Gossett, Jr., an African American actor, as Egyptian president Anwar Sadat in the 1982 TV miniseries Sadat.[13] Also, some objected to the casting of Jennifer Lopez in Selena because she is a New York City native of Puerto Rican descent while Selena was Mexican-American.[14]

The musical biopic Bohemian Rhapsody, based on the life of Queen singer Freddie Mercury, became the highest-grossing biopic of all time in 2018.[15][16][17]