From Infogalactic: the planetary knowledge core
Jump to: navigation, search
For other uses, see Biomechanical (disambiguation). 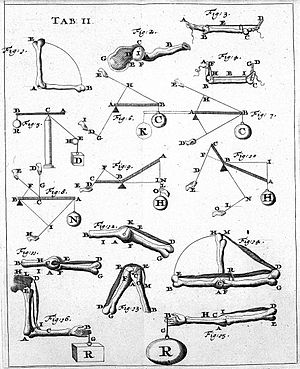 Biomechanics is the study of the structure and function of biological systems such as humans, animals, plants, organs, and cells[1] by means of the methods of mechanics.[2]

The word "biomechanics" (1899) and the related "biomechanical" (1856) from the Ancient Greek βίος bios "life" and μηχανική, mēchanikē "mechanics", to refer to the study of the mechanical principles of living organisms, particularly their movement and structure.[3]

Biomechanics is closely related to engineering, because it often uses traditional engineering sciences to analyze biological systems. Some simple applications of Newtonian mechanics and/or materials sciences can supply correct approximations to the mechanics of many biological systems. Applied mechanics, most notably mechanical engineering disciplines such as continuum mechanics, mechanism analysis, structural analysis, kinematics and dynamics play prominent roles in the study of biomechanics.

Usually biological systems are much more complex than man-built systems. Numerical methods are hence applied in almost every biomechanical study. Research is done in an iterative process of hypothesis and verification, including several steps of modeling, computer simulation and experimental measurements.

Applied subfields of biomechanics include:

In sports biomechanics, the laws of mechanics are applied to human movement in order to gain a greater understanding of athletic performance and to reduce sport injuries as well. It focuses on the application of the scientific principles of mechanical physics to understand movements of action of human bodies and sports implements such as cricket bat, hockey stick and javelin etc. Elements of mechanical engineering (e.g., strain gauges), electrical engineering (e.g., digital filtering), computer science (e.g., numerical methods), gait analysis (e.g., force platforms), and clinical neurophysiology (e.g., surface EMG) are common methods used in sports biomechanics.[4]

Biomechanics in sports can be stated as the muscular, joint and skeletal actions of the body during the execution of a given task, skill and/or technique. Proper understanding of biomechanics relating to sports skill has the greatest implications on: sport's performance, rehabilitation and injury prevention, along with sport mastery. As noted by Doctor Michael Yessis, one could say that best athlete is the one that executes his or her skill the best.[5]

The mechanical analysis of biomaterials and biofluids is usually carried forth with the concepts of continuum mechanics. This assumption breaks down when the length scales of interest approach the order of the micro structural details of the material. One of the most remarkable characteristic of biomaterials is their hierarchical structure. In other words, the mechanical characteristics of these materials rely on physical phenomena occurring in multiple levels, from the molecular all the way up to the tissue and organ levels.

Biomaterials are classified in two groups, hard and soft tissues. Mechanical deformation of hard tissues (like wood, shell and bone) may be analysed with the theory of linear elasticity. On the other hand, soft tissues (like skin, tendon, muscle and cartilage) usually undergo large deformations and thus their analysis rely on the finite strain theory and computer simulations. The interest in continuum biomechanics is spurred by the need for realism in the development of medical simulation.[6]:568

Biological fluid mechanics, or biofluid mechanics, is the study of both gas and liquid fluid flows in or around biological organisms. An often studied liquid biofluids problem is that of blood flow in the human cardiovascular system. Under certain mathematical circumstances, blood flow can be modelled by the Navier–Stokes equations. In vivo whole blood is assumed to be an incompressible Newtonian fluid. However, this assumption fails when considering forward flow within arterioles. At the microscopic scale, the effects of individual red blood cells become significant, and whole blood can no longer be modelled as a continuum. When the diameter of the blood vessel is just slightly larger than the diameter of the red blood cell the Fahraeus–Lindquist effect occurs and there is a decrease in wall shear stress. However, as the diameter of the blood vessel decreases further, the red blood cells have to squeeze through the vessel and often can only pass in single file. In this case, the inverse Fahraeus–Lindquist effect occurs and the wall shear stress increases.

An example of a gaseous biofluids problem is that of human respiration. Recently, respiratory systems in insects have been studied for bioinspiration for designing improved microfluidic devices.[7]

The main aspects of Contact mechanics & tribology are related to friction, wear and lubrication. When the two surfaces come in contact during motion i.e. rub against each other, friction, wear and lubrication effects are very important to analyze in order to determine the performance of the material. Biotribology is a study of friction, wear and lubrication of biological systems especially human joints such as hips and knees. For example, femoral and tibial components of knee implant routinely rub against each other during daily activity such as walking or stair climbing. If the performance of tibial component needs to be analyzed, the principles of biotribology are used to determine the wear performance of the implant and lubrication effects of synovial fluid. In addition, the theory of contact mechanics also becomes very important for wear analysis. Additional aspects of biotribology can also include analysis of subsurface damage resulting from two surfaces coming in contact during motion, i.e. rubbing against each other, such as in the evaluation of tissue engineered cartilage.[8] 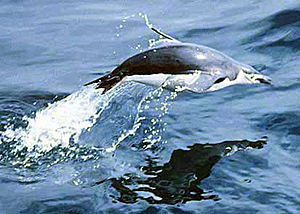 Comparative biomechanics is the application of biomechanics to non-human organisms, whether used to gain greater insights into humans (as in physical anthropology) or into the functions, ecology and adaptations of the organisms themselves. Common areas of investigation are Animal locomotion and feeding, as these have strong connections to the organism's fitness and impose high mechanical demands. Animal locomotion, has many manifestations, including running, jumping and flying. Locomotion requires energy to overcome friction, drag, inertia, and gravity, though which factor predominates varies with environment.[citation needed]

Comparative biomechanics overlaps strongly with many other fields, including ecology, neurobiology, developmental biology, ethology, and paleontology, to the extent of commonly publishing papers in the journals of these other fields. Comparative biomechanics is often applied in medicine (with regards to common model organisms such as mice and rats) as well as in biomimetics, which looks to nature for solutions to engineering problems.

The application of biomechanical principles to plants and plant organs has developed into the subfield of plant biomechanics.[9]

Over the past decade the Finite element method has become an established alternative to in vivo surgical assessment. The main advantage of Computational Biomechanics lies in its ability to determine the endo-anatomical response of an anatomy, without being subject to ethical restrictions.[10] This has led FE modelling to the point of becoming ubiquitous in several fields of Biomechanics while several projects have even adopted an open source philosophy (e.g. BioSpine).

Aristotle wrote the first book on the motion of animals, De Motu Animalium, or On the Movement of Animals.[11] He not only saw animals' bodies as mechanical systems, but pursued questions such as the physiological difference between imagining performing an action and actually doing it.[12] In another work, On the Parts of Animals, he provided an accurate description of how the ureter uses peristalsis to carry blood from the kidneys to the bladder.[6]:2

Leonardo da Vinci studied anatomy in the context of mechanics. He analyzed muscle forces as acting along lines connecting origins and insertions, and studied joint function. Da Vinci tended to mimic some animal features in his machines. For example, he studied the flight of birds to find means by which humans could fly; and because horses were the principal source of mechanical power in that time, he studied their muscular systems to design machines that would better benefit from the forces applied by this animal.[13]

Galileo Galilei was interested in the strength of bones and suggested that bones are hollow because this affords maximum strength with minimum weight. He noted that animals' bone masses increased disproportionately to their size. Consequently, bones must also increase disproportionately in girth rather than mere size. This is because the bending strength of a tubular structure (such as a bone) is much more efficient relative to its weight. Mason suggests that this insight was one of the first grasps of the principles of biological optimization.[13]

In the 16th century, Descartes suggested a philosophic system whereby all living systems, including the human body (but not the soul), are simply machines ruled by the same mechanical laws, an idea that did much to promote and sustain biomechanical study. Giovanni Alfonso Borelli embraced this idea and studied walking, running, jumping, the flight of birds, the swimming of fish, and even the piston action of the heart within a mechanical framework. He could determine the position of the human center of gravity, calculate and measured inspired and expired air volumes, and showed that inspiration is muscle-driven and expiration is due to tissue elasticity. Borelli was the first to understand that the levers of the musculoskeletal system magnify motion rather than force, so that muscles must produce much larger forces than those resisting the motion. Influenced by the work of Galileo, whom he personally knew, he had an intuitive understanding of static equilibrium in various joints of the human body well before Newton published the laws of motion.[14]

In the 19th century Étienne-Jules Marey used cinematography to scientifically investigate locomotion. He opened the field of modern 'motion analysis' by being the first to correlate ground reaction forces with movement. In Germany, the brothers Ernst Heinrich Weber and Wilhelm Eduard Weber hypothesized a great deal about human gait, but it was Christian Wilhelm Braune who significantly advanced the science using recent advances in engineering mechanics. During the same period, the engineering mechanics of materials began to flourish in France and Germany under the demands of the industrial revolution. This led to the rebirth of bone biomechanics when the railroad engineer Karl Culmann and the anatomist Hermann von Meyer compared the stress patterns in a human femur with those in a similarly shaped crane. Inspired by this finding Julius Wolff proposed the famous Wolff's law of bone remodeling.[15]

The study of biomechanics ranges from the inner workings of a cell to the movement and development of limbs, to the mechanical properties of soft tissue,[16] and bones. Some simple examples of biomechanics research include the investigation of the forces that act on limbs, the aerodynamics of bird and insect flight, the hydrodynamics of swimming in fish, and locomotion in general across all forms of life, from individual cells to whole organisms. The biomechanics of human beings is a core part of kinesiology. As we develop a greater understanding of the physiological behavior of living tissues, researchers are able to advance the field of tissue engineering, as well as develop improved treatments for a wide array of pathologies.

Biomechanics is also applied to studying human musculoskeletal systems. Such research utilizes force platforms to study human ground reaction forces and infrared videography to capture the trajectories of markers attached to the human body to study human 3D motion. Research also applies electromyography[17] (EMG) system to study the muscle activation. By this, it is feasible to investigate the muscle responses to the external forces as well as perturbations.

Biomechanics is widely used in orthopedic industry to design orthopedic implants for human joints, dental parts, external fixations and other medical purposes. Biotribology is a very important part of it. It is a study of the performance and function of biomaterials used for orthopedic implants. It plays a vital role to improve the design and produce successful biomaterials for medical and clinical purposes. One such example is in tissue engineered cartilage.[18]