Bird is a 1988 American biographical film, produced and directed by Clint Eastwood of a screenplay written by Joel Oliansky. The film is a tribute to the life and music of jazz saxophonist Charlie "Bird" Parker. It is constructed as a montage of scenes from Parker's life, from his childhood in Kansas City, through his early death at the age of 34.

The film moves back and forth through Parker's history, blending moments to find some truth to his life. Much of the movie revolves around his only grounding relationships with wife Chan Parker, Bebop pioneer trumpet player and band leader Dizzy Gillespie, and his influence (both musically and into the world of heroin addiction) on trumpet player Red Rodney.

Charlie 'Bird' Parker (Forest Whitaker) is cheered by the audience to a small jazz club in New York. He goes home feeling exultant, but his wife Chan Parker -née Richardson- (Diane Venora) is in no mood to have sex or be kind to him. During the following row, Chan wonders whether she did good in letting him in. The shouting wakes the baby up, and Charlie says he'll tend to him; however Chan prefers that he keeps away from the baby. Charlie feels heart-broken at that, so he takes another dose of some drugs. His body can't take them anymore, so he falls to the floor all bloodied.

Charlie goes to hospital, but feels the need to take drugs, which leads to a fight with an alcoholic patient (George Orrison). The director of the clinic worries about the finances of the treatment, and Chan blames his painful bleeding ulcers for Charlie's fall into drugs yet again. Charlie has these flashbacks about him seeing a dead body and a relative asking young Charlie (Damon Whitaker) to take some revenge, and of a broken drum flying by. The director wants to give Charlie the shock treatment, but Chan feels that such a thing will end with Charlie's creativity and brilliant performances for good, which will leave unable to provide for himself and his family.

Chan reminiscences about Charlie's debut in New York -Charlie from "just around"-. The talkative doorman (Chris Bosley) is witness to that, the same as a young Chan. Charlie replaces Don. Another player throws his instrument to the river after hearing Charlie. Charlie appears on the first page of the newspaper. Charlie admits that he owes everything to Dizzy Gillespie (Samuel E. Wright) on his way to the probation panel judges. Morello (Richard Jeni) is trying to get Charlie some work. Agent Moscowitz (Sam Robards) keeps on pestering Charlie trying to get from him the names of his drug dealers.

Charlie reminiscences about him going on a tour to California, and waking Dizzy and his wife Lorraine in the middle of the night so that he writes some music he's just improvised. Charlie makes a pass at Chan. Frog (Tony Todd) is also interested in Charlie Parker's girl. Charlie used to say to Chan that she calms him down, but she wants to make men crazy.

After a performance, Esteves (James Handy) visits him but Charlie doesn't want to talk to him. Charlie goes out with Chan, but his drug habits get on the way. She is also constantly complaining about his many other girls. She gets pregnant from whoever knows who. Charlie leaves, leaving her with the problem.

One night, on a Hollywood tour, he meets Red Rodney (Michael Zelniker), who also plays the trumpet. Charlie tells him never to touch drugs and gives him the opportunity to play with him. That night, Charlie has sex with Audrey (Anna Levine). She takes him to the home of Stravinsky, whom Charlie admires. Charlie rings the bell. He goes to the door with his wife, but Charlie does not dare to say anything. Charlie longs to have such a good home at a nice neighbourhood close to Thomas Mann, Huxley and other famous writers. Audrey goes to the same dentist than Stravinsky, and that's why she knew where he lived.

Charlie's music is off the air due to morality concerns. Charlie has problems to find drugs, so he resorts to drinking. Chan tries to convince club owners (Steve Zettler & Al Pugliese) that he's ready to work, but its' difficult. Charlie goes to Chan's as his eldest daughter and her grandmother are waiting for him. Charlie is pressured into give the names of fellow drug addicts by Moscowitz. As Charlie is broke, he embarks on a Parisian tour, which is really successful that he has the opportunity to stay there forever with a better life, with people respecting him and his music.

Back in New York, he needs to convince his musicians John Wilson (Hubert Kelly) and Billy McNabb to wait for him. Red Rodney offers him a gid playing at a wedding to earn some money on the while. They are relatives of Red Rodney, who is a Jewish guy. He improvises, as usual. The bride's father (Lou Catell) is happy about it and pays him what was agreed. Charlie wants to open Birdland to play there. Rodney phones Chan home because Charlie has gone back to his old ways. Rodney is a star on his own right. Charlie offers Rodney some gigs deep south with a mixed band. Rodney is worried they'll get lynched, but Charlie thinks hes' got that covered. Charlie says that Rodney is an albino black singer so instead of going to a nicer white hotel, he will share the blacks' accommodation - which is not very good. Red has to sing the blues, at first with little confidence, but then he goes with it. Red is sick with kidney stones. When he has to go to see a local doctor (Richard McKenzie). The nurse (Gretchen Oehler) tends to him and gets his history of previous kindney stones. Later, Red Rodney buys some stronger painkiller from the corrupt local doctor, simply offering some extra cash. The nurse stays silent throughout.

Rodney and Charlie have a conversation in which each one doubts that the other one will see forty. Rodney gets a year on jail. Charlie keeps on playing, getting awards, recording songs and improvising. Chan has got three children by now. They have all moved onto a better apartment. One of her daughters, Pree, is deeply sick. Charlie feels so unwelcome that he leaves to a bar. He asks Rodney where he can find some more drugs. Soon afterwards, he's walking half-dizzy in the pouring rain. Moscowitz sends him to jail.

Charlie's lawyer (Peter Crook) cannot make much when he's before the judge (Mathew Faison). Charlie'd rather go to jail and have his cabaret card signed afterwards than to stay on probation for such a long time. Charlie is with a chick at a club while Chan has to take Pree to hospital. A nun (Patricia Herd) asks Chan whether Pree has been baptized. When there daughter dies Charlie sends a telegram expressing his condolences to Chan. He looks distraught but he stays with Audrey throughout the ordeal and gets drugged up again leading to Charlie making a suicide attempt to his life with iodine.

Chan moves with her children to a smaller shabby house which her mother can't rent, in the hopes of mending it and making a stable home for her family. Charlie visits them and then leaves to a gig in Chicago. He has to drive as nobody would pay for his plane tickets - he's got infamous for his lack of reliability, his missed gigs, etc... Back at New York, all the jazz bars have been turned into strip joints.

Bernie can't find Charlie any more work, as he has the tendency to show up too late. Bernie tells Charlie to call Chan, who is really worried about him. Charlie tells her about a Boston gig, and pretens that everything's all right. Chan tries to be supportive, but she can't believe him anymore.

Charlie goes to Baroness Nica's. She calls a doctor (Don Starr), who tells her that Charlie is beyond repair. Charlie drinks -as usual-, he watches TV and laughs. It looks like he's having a heart attack. He remembers about people he knew, people who called him Yardbird, Pree's coffin, the body he was supposed to be avenging... Charlie "Bird" Parker died that night, in 1955 of a heart attack. Nica tries to reach Chan on the phone desperately to give her the news. A reporter (Jim Lane) thinks that Charlie was 65 years old, and gets startled when Nica corrects him: Charlie was only 34.

In the 1970s, Parker's friend and colleague Teddy Edwards shared his reminiscences of the saxophonist to Oliansky, who had wanted to make a biopic about Charlie Parker starring actor Richard Pryor.[5] The property was originally owned by Columbia Pictures, which traded the rights to Warner Bros. at Eastwood's instigation, in exchange for the rights to what would become Columbia's 1990 Kevin Costner vehicle, Revenge.[3] There was a delay of a few years while the trade was completed, and by then Pryor had lost interest. The film was eventually shot in 52 days for $14.4 million, not counting Eastwood's fee,[6] although in interviews Eastwood sometimes said the film only cost $9 million to make.[2][3] Locations used for filming include the Sacramento Valley, Los Angeles, and Pasadena in California as well as New York.[2] 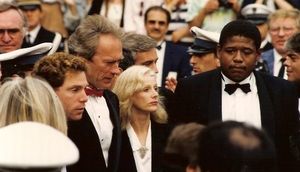 Initially, when Columbia owned the project, the studio executives wanted to hire musicians to re-record all of Parker's music, largely because most of the original recordings were in mono, and considered of insufficient sound quality to accompany a feature film. Eastwood had some recordings of Parker made by Parker's wife, Chan, from which he had a sound engineer electronically isolate Parker's solos. Contemporary musicians such as Ray Brown, Walter Davis, Jr., Ron Carter, Barry Harris, and Red Rodney were then hired to record backing tracks on modern sound equipment. Dizzy Gillespie was on tour at the time of recording, so trumpet player Jon Faddis was hired to record his parts.[3]