From Infogalactic: the planetary knowledge core
Jump to: navigation, search
This article is about the club in New York City. For the club in Vienna, see Joe Zawinul. 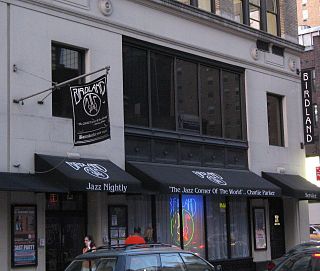 The third incarnation of Birdland on West 44th Street in 2008

Birdland is a jazz club started in New York City on December 15, 1949. The original Birdland, which was located at 1678 Broadway, just north of West 52nd Street in Manhattan,[1] was closed in 1965 due to increased rents, but it re-opened for one night in 1979.[1] A revival began in 1986 with the opening of the second nightclub by the same name that is now located in Manhattan's Theater District, not far from the original nightclub's location. The current location is in the building next to The New York Observer headquarters.

1678 Broadway, below the street level

Irving Levy (1923–1959), Morris Levy, and Oscar Goodstein – along with six other partners – purchased the venue in 1949 from Joseph "Joe the Wop" Catalano.[2] They adopted the name "Birdland" to capitalize on the popularity of their regular headliner Charlie "Yardbird" Parker, who, at that time, had been enjoying undisputed popularity as a jazz artist.[1][2][3]

The club was originally scheduled to open on September 8, 1949, but this was put back to December 15 following difficulties in getting a liquor license.[4] The opening night was "A Journey Through Jazz", consisting of various styles of the music up to that point, played by "Maxie Kaminsky, Lips Page, Lester Young, Charlie Parker, Harry Belafonte, Stan Getz, and Lennie Tristano, in that order."[4]

Parker, in reality, played very few jobs at Birdland, not because he was troublesome (from drug addiction), but, according to Gene Ramey, Goodstein said, "He was continually wanting money." Ramey had persuaded Goodstein to let Parker perform at Birdland with his band on a pair of Monday nights in 1954.[5]

The neon sign at the front of the club read, "Birdland, Jazz Corner of the World". The venue seated 500 people and had space for a full orchestra. It had a long bar, tables, booths, and a fenced-in bullpen — a drinkless area, nicknamed "the peanut gallery," where teenagers were sometimes allowed to watch. Irving Levy and Morris Levy were the main owners but the club was operated by Oscar Goodstein, who took tickets and tended the bar.[6] The name was carried through into the feature of caged finches inside the club.[3]

The venue attracted other jazz musicians who also made recordings there.[1] This includes Art Blakey's 1954 two-volume A Night at Birdland, most of John Coltrane's Live at Birdland and the Toshiko - Mariano Quartet's Live at Birdland. Dizzy Gillespie, Thelonious Monk, Miles Davis, Louie Bellson,[7] Bud Powell, Johnny Smith, Stan Getz, Lester Young, and many others made appearances. George Shearing's standard "Lullaby of Birdland" (1952) was named in the club's honor. The club's original master of ceremonies, the diminutive, four feet tall Pee Wee Marquette, was notorious for mispronouncing the names of musicians if they refused to tip him. The disc jockey Symphony Sid broadcast live on WJZ early in the club's existence.[3]

During the 1950s, Birdland also became a fashionable place for celebrities to be seen, with Frank Sinatra and Ava Gardner, Gary Cooper, Marilyn Monroe, Sugar Ray Robinson, Marlene Dietrich, Joe Louis, Judy Garland and others as regulars. Irving Levy was stabbed to death at the club in 1959. His younger brother, Morris, took over Irving's role in the club, and from 1959 through the early 1960s, the club enjoyed great success as one of the few remaining jazz clubs in the area.

In June 1964, Birdland filed for Chapter 11 bankruptcy in New York Federal Court. Goodstein was president of the club at the time. Creditors included Goodstein himself ($22,490), NLP Restaurant ($12,275), and Gerry Mulligan ($3,500), who had been booked through International Talent Associates. In an effort to stem losses in 1964, Birdland started booking jazz artists that played a more traditional style of jazz, rather than the "way-out" artists.[8] In 1965, Goodstein closed Birdland. The premises was taken over by Lloyd Price, an R&B and rock-and-roll singer who re-dedicated the venue and named it the Turntable.[9] Vincent Herring performing in Birdland in 2005

The current version of Birdland, initially owned by John R. Valenti, opened in Uptown, Manhattan in 1985 at 2745 Broadway at 105th Street.[1]

315 West 44th Street, between 8th & 9th Avenues (1996–present) In 1996, Valenti moved the club to West 44th Street, west of Eighth Avenue in Midtown Manhattan where it features a full weekly schedule of performers. Notable performers have included Michael Brecker, Pat Metheny, Lee Konitz, Diana Krall, Dave Holland, Regina Carter, and Tito Puente. It is also notable as the club where Toshiko Akiyoshi's jazz orchestra, on December 29, 2003, played its final concert. As mentioned above she had also played at the original Birdland.

Birdland was popular with many of the writers of the Beat generation. Reference to Birdland is made in Jack Kerouac's novel On the Road: "I saw him wish a well-to-do man Merry Christmas so volubly a five-spot in change for twenty was never missed. We went out and spent it in Birdland, the bop joint. Lester Young was on the stand, eternity on his huge eyelids." Birdland is also referenced in Emmett Grogan's novel Ringolevio. "From the get-go, Birdland became one of his favourite haunts."

George Shearing's popular song "Lullaby of Birdland" (with lyrics later added by George David Weiss) refers to the club. Since Sarah Vaughan's 1954 hit version, it has been a jazz standard.[10]

In 1993, Us3 released the single "Cantaloop", which opens with the line: "Ladies and gentlemen, as you know, we have something special down here at Birdland this evening"; Pee Wee Marquette's opening announcement from Art Blakey's first Birdland album in 1954. It appeared on Us3 1993 album Hand on the Torch, which was Blue Note's first platinum-selling album. It reached #9 on the Billboard Hot 100 and was their only big hit. "Cantaloop" is Blue Note's first gold single. It is sometimes called "Cantaloop (Flip Fantasia)".

Weather Report released their most commercially successful hit entitled "Birdland" on the album Heavy Weather in 1977. The Manhattan Transfer recorded a cover version of the same song in 1979, with vocalese lyrics describing the club in its heyday.

U2 references the club in the song "Angel of Harlem" with the lyrics "...Birdland on 53, the streets sounds like a symphony..."

In the play Send Me No Flowers, George Kimball relates a story concerning a female friend who ran off with a "bongo player from Birdland" after her husband died. The bongo player subsequently "took her for every cent". In the play Middle of the Night, the husband remembers the good old days at Birdland with his wife, in an attempt to save their marriage.

Sesame Street featured a night club called Birdland, run by Hoots the Owl, which was occupied by various birds.

The club, along with several artists such as Miles Davis, Ella Fitzgerald, and James Moody, are mentioned in Quincy Jones song "Jazz Corner of the World" [Introduction to Birdland].

Ray Charles references a dance of the same name in the lyrics of his song "What'd I Say": "See the girl with the red dress on, She can do the Birdland all night long...."

In the fighting game Skullgirls, the DLC Character Big Band's alter-ego is named Benjamin Birdland. This is a nod to the influence of jazz music on the character's creation.