The airport offers both domestic flights within the UK, and international flights to destinations in Europe, the Middle East, the Indian subcontinent, North America and the Caribbean. Passenger throughput in 2015 was about 10.2 million, making Birmingham the seventh busiest UK airport.[4] However, the airport is the sixth in terms of international passengers.

Birmingham has a CAA Public Use Aerodrome Licence (Number P451) that allows flights for the public transport of passengers or for flying instruction.

Birmingham Airport is 5.5 NM (10.2 km; 6.3 mi) east-south-east of Birmingham city centre, in the Metropolitan Borough of Solihull. It is bordered by the National Exhibition Centre to the east, Marston Green to the north, Sheldon to the west, and the village of Bickenhill to the south.

It is primarily served by the A45 main road, and is near Junction 6 of the M42 motorway. It is connected by the elevated AirRail Link with Birmingham International railway station on the West Coast Main Line.

The airport's location south-east of the city, plus the only operational runway being north-west – south-east (15/33), means that depending on wind direction, aircraft land or take-off directly over Birmingham. The relatively short north-east – south-west runway (06/24) is not operational, and has been incorporated into the taxiway for aircraft departing the end of runway 33, or gaining access to runway 15.

Where Birmingham Airport is now, as it was around 1921. (See[6] for a modern map of Birmingam Airport and around.) 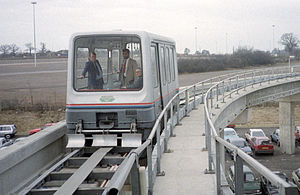 The Maglev rapid transport system, which operated from 1984 to 1995, was the first commercial maglev system in the world

During the post-war years, public events, such as air fairs and air races were held on the site. In 1961 An additional terminal building to handle international traffic was opened, called The International Building. In 1967 The main runway was extended to 7,400 feet (1.4 miles) to allow jet operations, including introducing VC-10 services to New York. 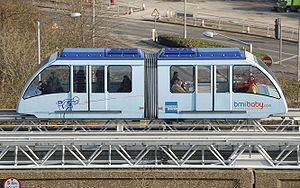 The AirRail Link joins the railway station to the airport, operated by a track and pulley system

In 1993 The Government limited public sector borrowing. This meant that the airport could only expand by using private sector finance. 51% of the local council shares were sold to restructure the airport into a private sector company, enabling a £260 million restructuring programme to begin in 1997. 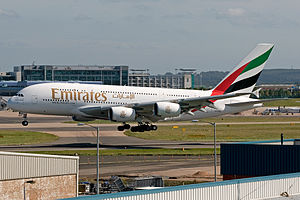 Emirates brings the A380 to Birmingham to celebrate 70 years of the airport and the opening of the new international pier. 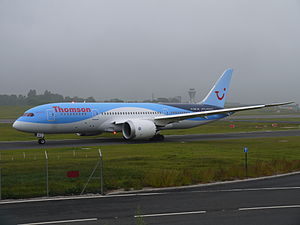 The extension to the southern end of the runway originally required the A45 Coventry Road to be diverted into a tunnel under the extended section, but to cut immediate costs, it was diverted to the south of the runway instead. In August 2013, the old carriageway of the A45 road was closed, and the new carriageway was opened.[19][20]

Originally, the target for completion was in time for the 2012 London Olympics and Paralympics. However, work began in late 2012, and the runway was completed in early May 2014.[21] The runway extension began to be used by aircraft in May 2014, and was officially opened on 22 July 2014, when China Southern Airlines operated its first charter flight between Birmingham and Beijing. This was the first aircraft that needed to make use of the new runway length.

The extension caused controversy as more than 2,000 local residents complained about the increased noise levels due to the new flight path around the airport that was required after the runway was extended.[21]

Birmingham Airport is served by Birmingham International station. The station is on the West Coast Main Line between Birmingham and London, and trains are operated by London Midland, Virgin Trains, Arriva Trains Wales and CrossCountry. Access between the railway station and the airport terminal is provided by the free AirRail Link.[58] 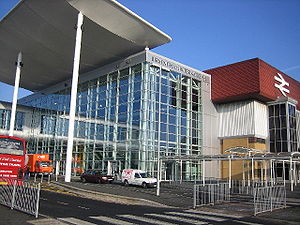 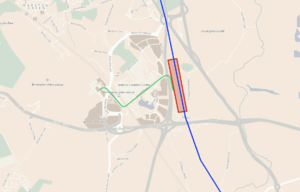 As part of the proposed High Speed Two rail link, a new railway station called Birmingham Interchange would be built to serve both the airport and the National Exhibition Centre. The station would be built on the far side of the M42 motorway and connect to the airport using a "rapid transit people mover". If the project is given the go ahead, High Speed Two is currently planned for completion by 2026.[59]

National Express West Midlands operates the main bus routes calling at Birmingham Airport, those being the 900 to Birmingham city centre and Coventry, and the 966 to Erdington and Solihull. Additionally service 97A to Birmingham via Chelmsley Wood now runs to the airport 24hrs a day.[60] Other smaller operators also call at the airport. Bus stops are situated outside Terminal One.[61] Most buses are operated by National Express West Midlands, who do not give change when selling tickets, so foreign travellers will need to ensure they have British coins when taking a local bus.[62]

National Express Coaches operate various long distance coaches calling at Birmingham Airport on the way to or from Birmingham Coach Station, such as the 777 and the 422.

Black cabs are available at the taxi-rank outside the arrivals area of the terminal.

Birmingham Airport is accessible from the north and south via Junction Six of the M42 motorway. From Birmingham city centre, the A45 runs directly to the airport. There are no pick-up or drop-off areas available outside the terminal.

The only cycle route available heads south over the A45 travelling towards Solihull. Birmingham Airport have however published "recommended routes" for cyclists.[63] Free short term cycle parking is available close to the terminal. For longer stays, bicycles must be stored in Left Luggage for a charge.[64]