Birmingham General Hospital was a teaching hospital in Birmingham, England, founded in 1779. 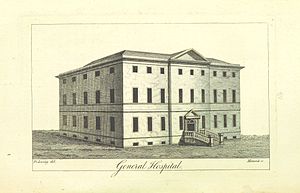 Drawing from William Hutton's 1809 book An history of Birmingham, showing the original building 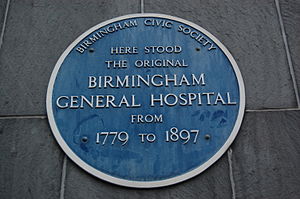 A blue plaque on Centro House

all those four closes, pieces, or parcels of Land, Meadow, or Pasture Ground, situate, lying, and being together near a place called the Salutation, in Birmingham aforesaid, containing, by estimation, eight Acres or thereabouts, be the same more or less, adjoining at the upper end or part thereof into a Lane there called Summer Lane, and at the lower end or part thereof unto a way called Walmore Lane

However, work to erect the new hospital on that land stopped through lack of funds in 1766.[1] Eventually, much of its funds came from the Birmingham Triennial Music Festival, the first of which was held over three days in September 1768,[3] and which continued to fund the hospital into the 20th century.[3]

The hospital finally opened on 20 September 1779,[1][4][5] giving its name to Hospital Street.[2] About 200 patients were treated in its first three months of operation,[5] even though the 40 beds were fewer than half those aimed for.[1]

Eventually 235 beds were provided on the site.[1]

The site was later used for a tram, then bus, depot and is now occupied by Centro House, headquarters of the West Midlands Passenger Transport Executive, where there is a blue plaque (at Lua error in Module:Coordinates at line 668: callParserFunction: function "#coordinates" was not found.) commemorating the hospital.[7]

The hospital relocated to Steelhouse Lane in 1897,[1][5] on a site formerly occupied by almshouses provided by Lench's Trust.[6]

Neville Chamberlain became an Official Visitor and then a director of the Hospital. He advocated a larger facility, a cause in which he was eventually successful, though building did not commence until 1934. He was still fundraising while he was Prime Minister.

On 5 July 1948 the hospital became part of the new National Health Service.

Until 1964 the hospital was a training centre for nurses, who, on qualification, became members of the General Hospital Birmingham Nurses League.[8] After 1964, training switched to Queen Elizabeth Hospital in the nearby suburb of Edgbaston.[8] The league was wound up in 2000, due to its remaining members' increasing age.[8]

The Birmingham pub bombings, the worst terrorist attack on the mainland until 2005, occurred within a mile of the hospital, on 21 November 1974. Taxi cabs and all available ambulances ferried victims to either the General or to the nearby Accident Hospital.[9]

In later years, a helicopter landing pad was marked near the road in front of the hospital, for use by air ambulances.

The General closed in the mid-1990s. Its Grade A locally listed, red brick building has been used as Birmingham Children's Hospital since 1998. 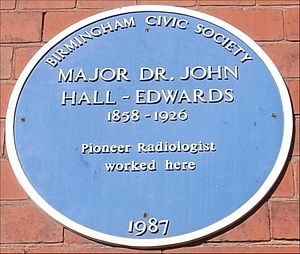