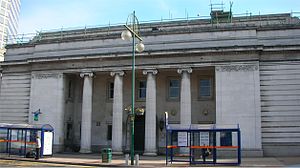 The Birmingham Municipal Bank was a savings bank in the city of Birmingham, England. It was created as the Birmingham Corporation Savings Bank by a 1916 Act of Parliament, to raise money to aid World War I. It was the only municipal bank in the country.

Logo, from the cover of a 1927 book "Britain's first Municipal Savings Bank- The romance of a great achievement" by J P. Hilton.

Suggested by local politician Neville Chamberlain in 1915, the bank was originally for savings from earnings, earning interest at 3.5%, with most of the income reserved for the government. It opened on 29 September 1916 after resistance from the banks and the Treasury.[citation needed] It had achieved 30,000 new investors by the end of 1917 and was made permanent in 1919. Its Golden Jubilee was celebrated in 1969 by a Birmingham postal slogan: "Municipal Bank Golden Jubilee 1919-1969".

The name changed to Birmingham Municipal Bank by a 1919 Act which allowed the creation of branch banks. By 1950 there were 66 branches. The bank's headquarters moved from a basement (1916) to the Council House (1919), to Edmund Street (1925), and finally to a new building by Thomas Cecil Howitt facing what is now Centenary Square at 301 Broad Street which was opened on 27 November 1933 by Prince George.[1] It ceased to be a department of the city council in 1976, becoming a Trustee Savings Bank,[2] and moved to the former central Post Office building in New Street. Ultimately the TSBs were privatised, and in 1995 became part of Lloyds TSB.

In 1935, Birmingham Municipal Bank caused controversy in Birmingham and Sutton Coldfield, when they outlined plans to open a branch in the town for the 4,000 residents who had accounts in the bank. Their plans created an outcry from people from the town, who feared that Birmingham was attempting the annexation of Sutton Coldfield. The protest resulted in a heated debate in the city's council chamber as to whether a written guarantee should be submitted to Sutton Coldfield outlining that they were not annexing the town. A spokesperson for Birmingham later said that they had no plans of annexing the town.[3]

Subsequently, following the Local Government Act 1972, Sutton Coldfield was merged into the city of Birmingham in 1974.