The Birmingham Street Commissioners were created in Birmingham, England by the Birmingham Improvement Act 1769 (Long title: An Act for the laying open and widening certain ways and passages within the Town of Birmingham, and for cleansing and lighting the streets, ways, lanes, and passages there, and for removing and preventing nuisances and obstructions therein.).[1] Subsequent Improvement Acts of 1773, 1801, and 1812 gave increased powers to the Street Commissioners. In 1812, they became responsible for the repair and drainage of roads.

The Board of Street Commissioners consisted of fifty residents, unpaid, each of whom owned property with a rateable value of over fifteen pounds. They included Sampson Lloyd (banker), John Taylor (banking partner of Sampson Lloyd), Dr. John Ash (founder of the General Hospital), and John Baskerville (printer). Replacement commissioners were chosen by the commissioners themselves. 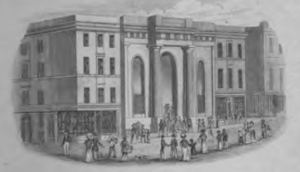 One of their early targets was the control and reorganisation of the markets, moving them towards the area now known as the Bull Ring. In 1817, the Smithfield Market was created on the moat of the old manor house. This handled cattle, horses, sheep, pigs, hay and straw.

In 1824, they purchased the Manor and rights to the markets from the lord of the manor.

The Market Hall was opened in 1835 for general merchandise. It was destroyed by bombs in World War II.

The Public Office, designed by William Hollins, was built in Moor Street in 1806 encompassing offices for the Street Commissioners, magistrates' courts and a prison.

In 1834, the Birmingham Town Hall was built.

The Municipal Corporations Act 1835 led to the first elected councils. Birmingham was incorporated in 1838 and the new corporation worked alongside the Street Commissioners.

In 1851, a new Birmingham Improvement Act gave Birmingham Corporation the functions of the Street Commissioners.