Bisbee was founded as a copper, gold, and silver mining town in 1880, and named in honor of Judge DeWitt Bisbee, one of the financial backers of the adjacent Copper Queen Mine.

In 1929, the county seat was moved from Tombstone to Bisbee, where it remains. 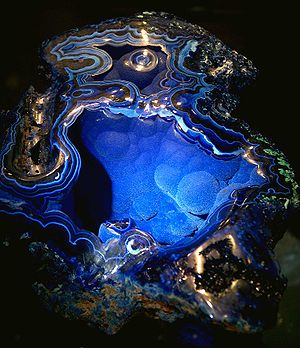 Classic azurite mineral specimen from the Bisbee mines, collected circa 1890

Mining in the Mule Mountains proved quite successful: in the early 20th century the population of Bisbee soared. Incorporated in 1902, by 1910 its population had swelled to 9,019, and it sported a constellation of suburbs, including Warren, Lowell, and San Jose, some of which had been founded on their own (ultimately less successful) mines. In 1917, open-pit mining was successfully introduced to meet the copper demand during World War I.

A high quality turquoise promoted as Bisbee Blue was a by-product of the copper mining. Many high-quality mineral specimens have come from Bisbee area mines and are to be found in museum collections worldwide. Some of these minerals include: Cuprite, aragonite, wulfenite, malachite, azurite, and galena.

Miners attempted to organize to gain better working conditions and wages. In 1917, the Phelps Dodge Corporation, using private police, transported at gun point over 1,000 striking miners out of town to Hermanas, New Mexico, due to allegations that they were members of the Industrial Workers of the World (IWW); the company wanted to prevent unionization.[4] Earlier that year, industry police conducted the Jerome Deportation, a similar event to expel striking miners.

The introduction of open-pit mining in the 1950s and continued underground work enabled the town to survive changes in mining. Neighboring towns had mines that closed, with a resulting dramatic loss of population. But, by 1950, the population of Bisbee had dropped to less than 6,000. In 1975 the Phelps Dodge Corporation halted its Bisbee copper-mining operations.

Bisbee Mayor Chuck Eads, with cooperation of Phelps Dodge, implemented development of a mine tour and historic interpretation of a portion of the world-famous Copper Queen Mine as part of an effort to create heritage tourism as another base for the economy. They worked to compensate for the economic loss due to the end of the mining industry in the area.

Community volunteers cleared tons of fallen rock and re-timbered the old workings. Eventually, this local effort came to the attention of the federal Economic Development Administration. It approved a large grant to the City of Bisbee to help the mine tour project and other improvements in downtown Bisbee; these were designed to meet tourist business needs. The Queen Mine Tour was officially opened to visitors on February 1, 1976. More than a million visitors, from all 50 states and more than 30 foreign countries, have taken the underground mine tour train.

From 1950 to 1960, the sharp population decline changed and the number of residents of Bisbee increased by nearly 160 percent when open-pit mining was undertaken and the city annexed nearby areas. The peak population was in 1960, at 9,914.

In the following decade, there was a decline in jobs and population, although not as severe as from 1930 to 1950. But, the economic volatility resulted in a crash in housing prices. Coupled with an attractive climate and picturesque scenery, Bisbee became a destination in the 1960s for artists and hippies of the counter culture.

Artist Stephen Hutchison and his wife Marcia purchased the Copper Queen Hotel, the town's anchor business and architectural gem, from the Phelps-Dodge mining company in 1970. The company had tried to find a local buyer, offering the deed to any local resident for the sum of $1.00, but there were no takers. The property needed renovation for continued use. 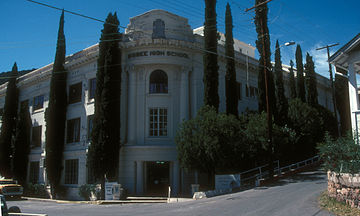 Hutchison purchased and renovated the hotel, as well as other buildings in the downtown area. One held the early 20th-century Brewery and Stock Exchange. Hutchison began to market Bisbee as a destination of the "authentic," old Southwest. His work attracted the developer Ed Smart.

Among the many guests at the hotel have been celebrities from nearby California. Actor John Wayne was a frequent visitor to Bisbee and the Copper Queen. He befriended Hutchison and eventually partnered with Smart in his real estate ventures. This period of Bisbee's history is well documented in contemporary articles in The New Yorker and in an article by Cynthia Buchanan in The Cornell Review. It was at this time that Bisbee became a haven for artists and hippies fleeing the larger cities of Arizona and California. Later it attracted people priced out by gentrification of places such as Aspen, Colorado.

In the 1990s, additional people have been attracted to Bisbee, leading it to develop such amenities as coffee shops and live theatre. Many of the old houses have been renovated, and property values in Bisbee now greatly exceed those of other southeastern Arizona cities.

Today, the historic city of Bisbee is known as "Old Bisbee" and is home to a thriving downtown cultural scene. This area is noted for its architecture, including Victorian-style houses and an elegant Art Deco county courthouse. Because its plan was laid out to a pedestrian scale before the automobile, Old Bisbee is compact and walkable. The town's hilly terrain is exemplified by the old four-story high school; each floor has a ground-level entrance.

In the May–June 2000 issue of Modern Maturity, the AARP highlighted what they called the most "alive" places to retire in the U.S. Bisbee was a runner-up as one of the "quirkiest" towns in America.[5][6] 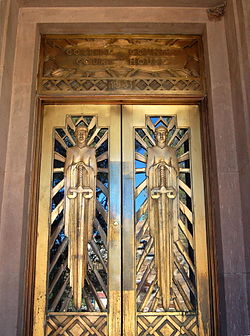 The city of Bisbee now includes the satellite communities of Warren, Lowell, and San Jose. The Lowell and Warren townsites were consolidated into Bisbee proper during the early part of the twentieth century. There are also smaller neighborhoods interspersed between these larger boroughs, including Galena, Bakerville, Tintown, South Bisbee, Briggs, and Saginaw.

Warren was Arizona's first planned community. It was designed as a bedroom community for the more affluent citizens of the mining district. Warren has a fine collection of Arts and Crafts style bungalow houses. Many have been recognized as historic places, and the city has an annual home tour during which a varying selection are offered for tours. Since the end of mining in the 1970s, Warren has seen a steady decline in its standard of living. The residential district still houses a significant portion of the population, and includes City Hall, Greenway Elementary School, Bisbee High School, and the historic Warren Ballpark.

Lowell was at one time a sizable mining town located just to the southeast of Old Bisbee. The majority of the original townsite was consumed by the excavation of the Lavender Pit mine during the 1950s. All that is left today is a small portion of Erie Street, along with Evergreen Cemetery, Saginaw subdivision and Lowell Middle School. These days Lowell is considered by most of the local residents to be more of a place name than an operating community.

San Jose, on the southern side of the Mule Mountains, is the most modern of the city's subdivisions. As it is not restricted by mountains, it has had the most new growth since the late 1990s. Named after a nearby Mexican mountain peak, it is the location of many newer county government buildings, the Huachuca Terrace Elementary School, and a large shopping center.

In 2007, in what has been noted as the world's biggest-ever mining takeover, Freeport-McMoRan Copper & Gold bought Phelps Dodge Mining.[7] It began preliminary mining work in the area. Full mine operations began in 2013 with the mining of gold in addition to copper. Free-Port has invested in Bisbee by remediating soil contaminated in previous mining operations, donations to the school system,and other civic activities.[citation needed]

The Bisbee 1000 Stair Climb is a five-kilometer run through the city that traverses 1,034 stairs. Billed as "the most unique physical fitness challenge in the USA!" by the organizers,[8] the Climb includes runners being serenaded by musicians at various locations among the stairs. The event has grown to include the Ice Man Competition, designed to honor the history of men delivering blocks of ice by hand before the advent of refrigeration. In the Ice Man Competition, entrants race up 155 steps carrying a ten-pound block of ice with antique ice tongs.

Bisbee also hosts an annual Blues festival, occurring in 2015 during the second week of September. The festival effectively lengthens the tourist season, and provides a large amount of business to local bars and breweries.[9]

Naco, Arizona, is a small unincorporated border community some three miles south of the San Jose district of Bisbee. It straddles the Mexico–United States border and is the site of an official port of entry. Naco features a U.S. post office, an elementary school, and several businesses, including a small store, garage, and saloon.

Bisbee Junction (formerly Osborn or Osborn Junction) is located four miles south of Warren. It was originally a railroad siding where ore trains from the Bisbee mines joined with the main Southern Pacific Railroad line. A Southern Pacific depot and U.S. Post Office building, in the style of the first half of the 20th century, were located at the railroad junction. The depot and post office were closed in the late 1950s and the building was razed soon afterward. A dance hall, an Elks club and small dry goods store were once located near the depot. The community was once the location of several cattle ranches and dairies. The Arizona Cactus Botanical Garden was located in Bisbee Junction.

Natural vegetation around Bisbee has a semi-desert appearance with shrubby acacia, oak and the like, along with cacti, grass, ocotillo and yucca. The town itself is much more luxuriant with native trees such as cypress, sycamore and cottonwood plus the introduced ailanthus and Old World cypresses, cedars and pines. Palms are capable of large size, but are not reliably hardy. On the other hand, a few higher-elevation trees such as blue spruce and white fir are growing fairly well in Bisbee.

Bisbee has the typical semi-arid climate (Köppen BSk) of the upland Mountain West. Summer days are warm to hot and dry before the monsoon brings the wettest season from July to September with 10.65 inches (270.5 mm) of Bisbee's total annual rainfall of 18.63 inches (473.2 mm). During the winter, frontal cloudbands may bring occasional rainfall or even snowfall, though average maxima in the winter are typically very mild and sometimes even warm.

There were 2,810 households out of which 21.7% had children under the age of 18 living with them, 36.8% were married couples living together, 12.8% had a female householder with no husband present, and 46.5% were non-families. 39.1% of all households were made up of individuals and 14.6% had someone living alone who was 65 years of age or older. The average household size was 2.15 and the average family size was 2.90.

Bisbee is governed via the mayor-council system. The city council consists of six members who are elected from wards. Each ward elects two members, The mayor is elected in a citywide vote.[citation needed]

The City of Bisbee administers the Bisbee Bus; services are operated by the City of Douglas' Douglas Rides.[16]

(excluding those mentioned under History)

Bisbee joined with Clifton in forming a cricket team that travelled to Santa Monica, California, in 1908 to play the Santa Monica Cricket Club in two games overlooking the Pacific Ocean on the grounds of the Polo Field. The miners lost both cricket games.[17] The Copper Echo reported that Bennie, the general manager of the Shannon Company Copper Mine, was the miners' best cricketer. 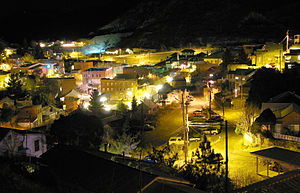 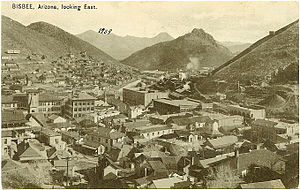