From Infogalactic: the planetary knowledge core
(Redirected from Bishop of Beauvais)
Jump to: navigation, search 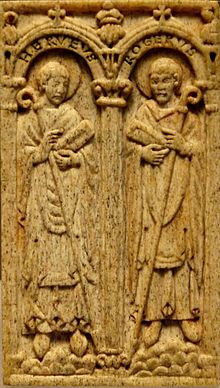 Harvey and Roger, two bishops of Beauvais in the Middle Ages, panel from the binding of a pontifical in the cathedral of Beauvais

The diocese of Beauvais was traditionally founded by St. Lucian (Lucianus, Lucien) in the 3rd century. After 1013 the Bishops were simultaneously Counts of Beauvais, and one of the Peers of France. The Bishop had a role in the coronation ceremony of the French king, and played a role in politics; Roger II died during the First Crusade, Philip of Dreux was a participant in the Third Crusade and the Battle of Bouvines, and Pierre Cauchon was involved in the trial of Joan of Arc.

The diocese was abolished during the French Revolution, and was recreated as part of the Diocese of Amiens in 1802. Beauvais was re-established in 1822, and the Diocese of Beauvais-Noyon–Senlis was created in 1851, comprising the territories of all three formerly separate dioceses. Beauvais Cathedral serves as the seat of the new diocese, which has a population of 766,441, 90% of whom are Roman Catholic.