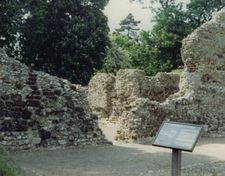 Remains of the Saxon cathedral at North Elmham

The Bishop of Elmham is an episcopal title which was first used by an Anglo-Saxon bishop between the 7th and 11th centuries and is currently used by the Roman Catholic Church for a titular see. The title takes its name after the small town of North Elmham in Norfolk, England. 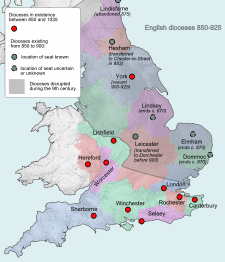 The Anglo-Saxon dioceses before 925

In about 630 or 631, a diocese was established by St. Felix for the Kingdom of the East Angles, with his episcopal seat at Dunwich on the Suffolk coast. In 672, the diocese was divided into the sees of Dunwich and Elmham by St. Theodore, Archbishop of Canterbury.

The line of bishops of Elmham continued until it was interrupted by the Danish Viking invasions in the late 9th and early 10th centuries. By the mid 950s, the sees of Elmham and Dunwich were reunited under one bishop, with the episcopal see at Elmham. After the Norman conquest, the see was transferred to Thetford in 1075, and soon afterwards to Norwich in 1094.

In 1969, the Roman Catholic Church revived the title Bishop of Elmham, using Elmhama as the name of the titular see, but Helmamensis as the adjectival form in Contemporary Latin.[3] The current titular bishop is the Most Reverend Eamonn Oliver Walsh, Auxiliary Bishop of Dublin who was appointed on 7 March 1990.[4]