The Bishopric of Constance, or Prince-Bishopric of Constance, (German: Hochstift Konstanz, Fürstbistum Konstanz) was a Prince-Bishopric and Imperial Estate of the Holy Roman Empire from the mid–12th century until its secularisation in 1802–1803. The much larger Roman Catholic Diocese of Konstanz existed from about 585 until its dissolution in 1821. It belonged to the ecclesiastical province of Mainz since 780/782.

The immediate territory of the Prince-Bishopric was scattered on both sides of western Lake Constance, stretching from the Höri peninsula and the High Rhine in the west along Untersee with the Monastic Island of Reichenau, the Bodanrück peninsula, and Lake Überlingen to the Linzgau region in the northeast. They did not include the Imperial City of Constance nor Petershausen Abbey. In the south, the bishop's territory bordered on the Landgraviate of Thurgau which was conquered by the Swiss Confederacy in 1460. 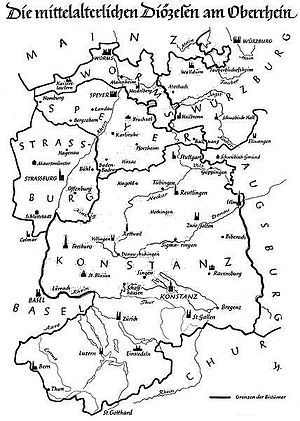 The Imperial state should not be confused with the diocese of the same name, which was considerably larger (see map), covering much of present-day Baden-Württemberg, a large part of Switzerland all the way south to the Gotthard Pass, as well as a small part of Vorarlberg, Austria. While the Prince-Bishop was the secular ruler in his prince-bishopric, his powers in his diocese were limited to the pastoral duties exercised by any bishop. 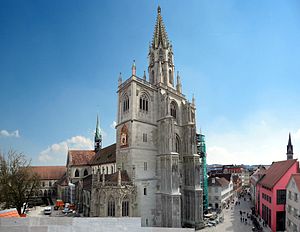 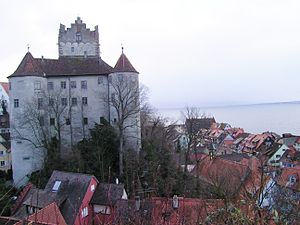 The Old Palace in Meersburg, where the bishops lived until they built a new palace in the 18th century

A deed by Emperor Frederick I Barbarossa in 1155 confirmed the princely status of the bishop and of his bishopric as an Imperial Estate. The territory of the prince-bishopric contracted during the following centuries under pressure from both the Swiss Confederacy and the House of Habsburg. Furthermore, the city of Konstanz was granted the status of a free imperial city and from then on the bishop’s sovereignty in the city was restricted to a small area around the cathedral church. In 1527, during the Protestant Reformation, the administrative seat of the Prince-Bishop was finally moved to Meersburg across Lake Constance. However, Konstanz fell to the Counter-Reformation induced by the Habsburgs, who eventually abolished its status as a free imperial city and incorporated it into their Further Austrian possessions in 1548.

The huge diocese of Constance suffered heavily during the Reformation and it lost several hundred parishes, convents and other Catholic foundations which were suppressed by the various states, free imperial cities and cantons in Swabia and Switzerland that had become Protestant.

In the course of the German Mediatisation in 1803, the Prince-Bishopric was dissolved and its territory was annexed to the Margraviate of Baden.

In turn, the diocese was dissolved by Pope Pius VII in 1821 after Vicar General Ignaz Heinrich von Wessenberg had been elected diocesan administrator upon the death of the last bishop Karl Theodor von Dalberg in 1817. While Wessenberg was supported by the government of Baden, the Pope never recognized his election as he disagreed with Wessenberg's liberal views. By a bull of 16 August 1821, the pope dissolved the diocese in order to prevent Wessenberg from becoming bishop. The area of the diocese in Baden became part of the newly established Roman Catholic Archdiocese of Freiburg in 1827 while the Swiss areas were incorporated in the Diocese of Basel, whereas the cantons of Obwalden and Nidwalden, parts of Uri, Glarus and Zürich are provisorily administrated by the Diocese of Chur up to today. 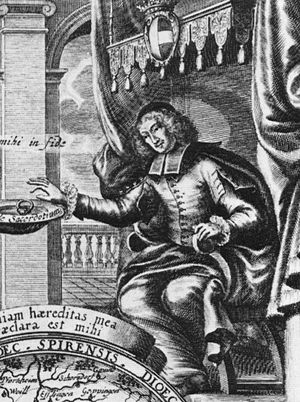