The Prince-Bishopric of Hildesheim (German: Hochstift Hildesheim) was a state of the Holy Roman Empire from the Middle Ages until 1803. It was the territory of princely rule held by the incumbents of the Diocese of Hildesheim, therefore wielding secular and religious functions as prince-bishops. It was named after its capital, Hildesheim.

After the Duchy of Saxony had been conquered by the Frankish Kingdom, Emperor Charlemagne in 800 founded a missionary diocese at his eastphalian court in Elze (Aula Caesaris), about 19 km (12 mi) west of Hildesheim. His son King Louis the Pious established the bishopric at Hildesheim in 815, dedicated to Virgin Mary. 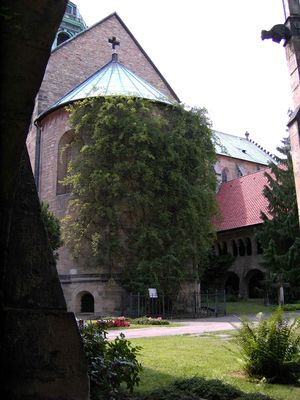 According to legend delivered by the Brothers Grimm, the king was hunting in the wintery woods of Elze, when he realized that he had lost his pendant with the relic of Blessed Virgin Mary. Distraught he sent out his attendance who finally discovered a flowering rose bush with the relic in his branches, which it would not let go. Louis had a chapel built by the side of the rose, the later St. Mary's Cathedral. A rosa canina is still growing at the apse of the cathedral, called the Millennium Rose or Thousand-year Rose (Tausendjähriger Rosenstock).

His son King Louis the German appointed the famous former archbishop of Rheims, Ebbo, as bishop between 845 and 847. Ebbo's successor Altfrid began the construction of the cathedral, the groundplan of which has not been changed since then. During the reign of the Saxon Ottonian dynasty Hildesheim, together with the neighbouring bishoprics of Halberstadt and Magdeburg, became the central ecclesiastical territory of the Holy Roman Empire. Bishop Bernward (993-1022) and his successor Gotthard (1022-1038) added much to the architectonic and cultural tradition of the present-day World Heritage Site.

At the Reichstag at Mainz of August 15, 1235 Bishop Conrad II reached the official acknowledgement of Hildesheim as a Prince-bishopric (Hochstift) by Emperor Frederick II of Hohenstaufen. As a negative consequence of this success, Hildesheim began to interfere with the neighbouring Welf duchy of Brunswick-Lüneburg, culminating in the Hildesheim Diocesan Feud 1519-1523 with warlike Duke Henry the Younger of Brunswick-Wolfenbüttel that led to a significant loss of territories.

In the 16th century, most of the diocese as well as most of the state of Hildesheim switched to Protestantism. But the Bishopric managed not only to retain its independence from the surrounding Protestant states of Brunswick-Lüneburg, but also to retrieve large parts of the lost estates, mostly because its bishops were members of the powerful House of Wittelsbach from 1573 until 1761, at last Clemens August of Bavaria from 1723, who also was archbishop and prince-elector of Cologne, prince-bishop of Münster, Osnabrück and Paderborn as well as Grand Master of the Teutonic Order. 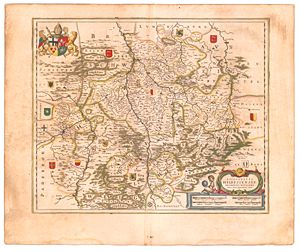