From Infogalactic: the planetary knowledge core
(Redirected from Bishopric of Schwerin)
Jump to: navigation, search

This list records the bishops of the Roman Catholic diocese of Schwerin (German: Bistum Schwerin), a suffragan of the Archdiocese of Bremen, who were simultaneously rulers of princely rank (prince-bishop) in the Prince-Bishopric of Schwerin (German: Hochstift Schwerin; est. 1180 and secularised in 1648), a state of imperial immediacy within the Holy Roman Empire. Schwerin was the seat of the chapter, Schwerin Cathedral and residence of the bishops until 1239. In 1180 a prince-episcopal residence was established in Bützow and became the main residence since 1239.

Coat-of-arms of the Prince-Bishopric of Schwerin

Titles of the incumbents of the Schwerin See 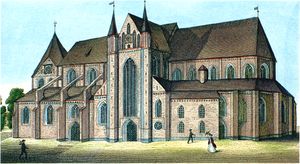 Cathedral of Ss. Mary and John the Baptist, church of the bishops in Schwerin, view before 1845. 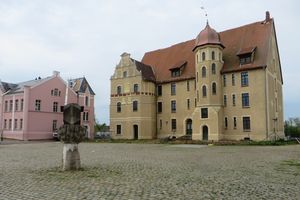 Not all incumbents of the Schwerin See were imperially invested princely power as Prince-Bishops and not all were papally confirmed as bishops. In 1180 part of the Schwerin diocesan territory were disentangled from the Duchy of Saxony and became an own territory of imperial immediacy called Prince-Bishopric of Schwerin, a vassal of the Holy Roman Empire. The prince-bishopric was an elective monarchy, with the monarch being the respective bishop usually elected by the Cathedral chapter, and confirmed by the Holy See, or exceptionally only appointed by the Holy See. Papally confirmed bishops were then invested by the emperor with the princely regalia, thus the title prince-bishop. However, sometimes the respective incumbent of the see never gained a papal confirmation, but was still invested the princely regalia. Also the opposite occurred with a papally confirmed bishop, never invested as prince. A number of incumbents, elected by the chapter, neither achieved papal confirmation nor imperial investiture, but as a matter of fact nevertheless de facto held the princely power. From 1532 to 1648 all incumbents were Lutherans.

The respective incumbents of the see bore the following titles:

Lutheran Administrators of the Prince-Bishopric (1532–1648)

Lutheran Regional Bishops of Mecklenburg since 1921 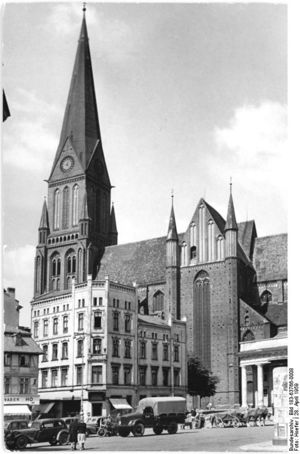 Cathedral of Ss. Mary and John the Baptist, Schwerin, preaching venue of the Landesbischof of Mecklenburg.

When the grand dukes of Mecklenburg-Schwerin and Mecklenburg-Strelitz abdicated the Lutheran state churches became independent and adapted their new Church Orders, providing for a function called Landesbischof (state bishop). In 1934 the regional churches merged into the Evangelical Lutheran State Church of Mecklenburg.

Roman Catholic bishops in Schwerin since 1946 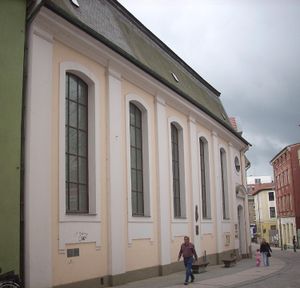 Provostry Church of St. Anna, seat of the auxiliary bishop of Hamburg in Schwerin.