From Infogalactic: the planetary knowledge core
(Redirected from Bishops of Selsey)
Jump to: navigation, search 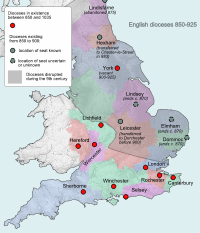 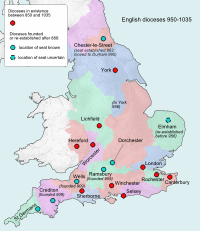 The Bishop of Selsey was an episcopal title which took its name after the small town of Selsey in Sussex, England.

The episcopal see at Selsey was founded by Saint Wilfrid, formerly Bishop of the Northumbrians, for the Anglo-Saxon Kingdom of Sussex in the late 7th century. He was granted land by King Æthelwealh of Sussex to build a cathedral at Selsey. However, shortly afterwards King Cædwalla of Wessex conquered the Kingdom of Sussex, but he confirmed the grant to Wilfrid. The bishop's seat was located at Selsey Abbey. Nine years after the Norman conquest, in 1075, the Council of London enacted that episcopal sees should be removed to cities or larger towns. Accordingly, the see at Selsey was removed to Chichester. Some sources claim that Stigand, the last bishop of Selsey, continued to use the title Bishop of Selsey until 1082, before adopting the new title Bishop of Chichester, indicating that the transfer took several years to complete.[1]

(Dates in italics indicate de facto continuation of office) The dates of the early bishops are uncertain.