From Infogalactic: the planetary knowledge core
Jump to: navigation, search
For other uses, see Bishopsgate (disambiguation).

Bishopsgate is one of the 25 wards of the City of London and also the name of a major road (part of the A10) between Gracechurch Street and Norton Folgate in the northeast corner of London's main financial district.[1] Bishopsgate is named after one of the original eight gates in the London Wall. The site of this former gate is marked by a stone bishop's mitre, fixed high upon a building located at Bishopsgate's junction with Wormwood Street, by the gardens there and facing the Heron Tower.

Although tens of thousands of people commute to and work in the ward, it has a resident population of only 222 (2011).[2]

The ward (which is large by City standards) is bounded by Worship Street to the north, where the edge of the City meets the boroughs of Islington and Hackney. It neighbours Portsoken ward and the borough of Tower Hamlets in the east. The western boundary is formed by Old Broad Street and Broad Street ward itself. Bishopsgate also bounds the wards of Aldgate (southeast), Coleman Street (west), Cornhill (southwest) and Lime Street (south). Bishopsgate ward straddles the (now former) line of the Wall and the old gate and is often (even today)[3] divided into "Within" and "Without" parts, with a deputy (alderman) appointed for each part.

Since the 1994 (City) and 2003 (ward) boundary changes, almost all of the ward is Without; only a small area surrounding the Leathersellers' livery hall remains as Bishopsgate Within.[4] The ward previously extended much further south, along the Bishopsgate road and Gracechurch Street to meet Langbourn ward, but in the 2003 changes much of the Within part was transferred to Cornhill and Lime Street. No changes to Bishopsgate's ward boundaries occurred in the 2013 boundary changes.[4]

Originally Roman, the Bishop's Gate was rebuilt by the Hansa merchants in 1471 in exchange for Steelyard privileges. Its final form was erected in 1735 by the City authorities and demolished in 1760. This gate often displayed the heads of criminals on spikes. London Wall (which is no longer extant in this sector) divided the ward and road into an intramural portion called Bishopsgate Within and an extramural portion called Bishopsgate Without. The Bishopsgate thoroughfare forms part of the A10 and the section to the north of the site of the original Gate is the start of Roman Ermine Street, also known as the 'Old North Road'.

The parish church for the area of Bishopsgate Without is St Botolph-without-Bishopsgate. This is located just to the north of the original Gate on the west side of the road.

Bishopsgate Within was originally divided into many parishes each with its own parish church: St Andrew Undershaft, St Ethelburga Bishopsgate, St Martin Outwich, St Mary Axe and St Helen's Bishopsgate, now all amalgamated under the jurisdiction of the latter. St Helen's is a very historic medieval church and former monastic establishment with many ancient funerary monuments and a stained glass window depicting William Shakespeare — commemorating a very famous former parishioner who lived in the area in the early to mid 1590s. 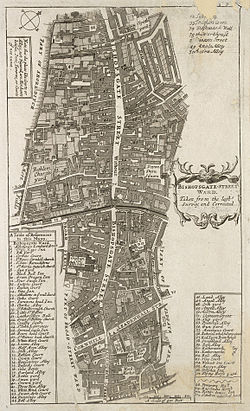 Bishopsgate was originally the location of many coaching inns which accommodated passengers setting out on the Old North Road. These, though they survived the Great Fire of London, have now all been demolished, though the modern White Hart pub, to the north of St Botolph's at the junction with Liverpool Street, is the successor of an inn of the same name. Others included the Dolphin, the Flower Pot, the Green Dragon, the Wrestlers, the Angel and the Black Bull. The latter was a venue for the Queen's Men theatrical troupe in the 16th century.

The name of an inn called the Catherine Wheel (demolished 1911) is commemorated by Catherine Wheel Alley which leads off Bishopsgate to the east. The 17th century facade of Sir Paul Pindar's House, demolished to make way for Liverpool Street railway station in 1890, on Bishopsgate was also preserved and can now be seen in the Victoria and Albert Museum. In the 18th century this grand residence became a tavern called Sir Paul Pindar's Head; another notable venue was the London Tavern (1768-1876). Also demolished (but then re-erected in Chelsea) was the old Crosby Hall, at one time the residence of Richard III and Thomas More. 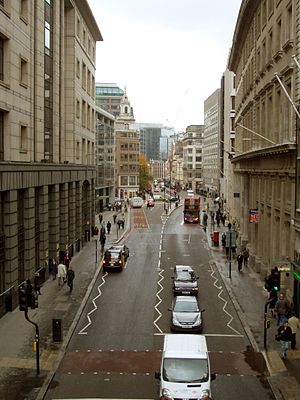 Looking north from a pedestrian bridge across Bishopsgate in 2004.

Bishopsgate is also the site of Dirty Dick's (a pub over 200 years old), the Bishopsgate Institute, and many offices and skyscrapers.

On 24 April 1993 it was the site of an IRA truck bombing which killed journalist Ed Henty, injured over 40 people and caused £1 billion worth of damage,[5] including the destruction of St Ethelburga's church and damage to the NatWest Tower and Liverpool Street station. Police had received a coded warning, but were still evacuating the area at the time of the explosion. The area had already suffered damage from the Baltic Exchange bombing one year prior.

The street is home to the main London offices of several major banks including the Royal Bank of Scotland and the European Bank for Reconstruction and Development. Within the ward falls the Broadgate Estate. 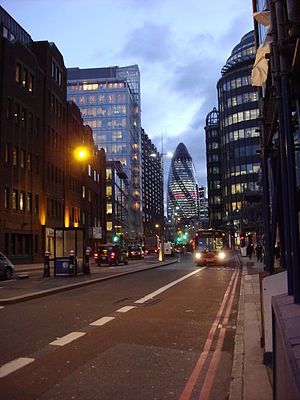 The following are tall buildings and skyscrapers built, under construction or approved for Bishopsgate (the street), from north to south: