From Infogalactic: the planetary knowledge core
Jump to: navigation, search
This article is about the capital of Guinea-Bissau. For the town in Rajasthan, India, see Bissau, Rajasthan.

Bissau is the capital city of Guinea-Bissau. In 2007 Bissau had an estimated population of 407,424.[1] Bissau is located on the Geba River estuary, off the Atlantic Ocean, and is Guinea-Bissau's largest city, major port, and its administrative and military centre.

The city was founded in 1687 by Portugal as a fortified port and trading center. In 1942 it became the capital of Portuguese Guinea.

The city, as the seat of government, was the scene of intense fighting during the beginning and end of the Guinea-Bissau Civil War in 1998 and 1999.[2]

Bissau has a tropical savanna climate (Köppen Aw), not quite wet enough to qualify as a tropical monsoon climate (Am) but much wetter than most climates of its type. Almost no rain falls from November to May, but during the remaining five months of the year the city receives around 2,020 millimetres (80 in) of rain. During the wet season and even during the three months beforehand, high humidity makes heat discomfort extreme.

There are two Portuguese international schools in Bissau:[5] 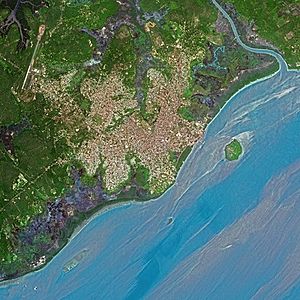 Bissau is twinned with: