From Infogalactic: the planetary knowledge core
Jump to: navigation, search
For other uses, see bit (disambiguation). 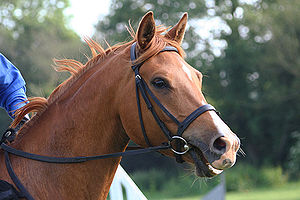 A bit is a type of horse tack used in equestrian activities, usually made of metal or a synthetic material, and is placed in the mouth of a horse or other equid and assists a rider in communicating with the animal. It rests on the bars of the mouth in an interdental region where there are no teeth. It is held on a horse's head by means of a bridle and has reins attached for use by a rider.

Although there are hundreds of design variations, the basic families of bits are defined by the way in which they use or do not use leverage. They include:

Bits are further described by the style of mouthpiece that goes inside the horse's mouth as well as by the type of bit ring or bit shank that is outside the mouth, to which the reins are attached.

Types of headgear for horses that exert control with a noseband rather than a bit are usually called hackamores,[3] though the term "bitless bridle" has become a popular colloquialism in recent years. 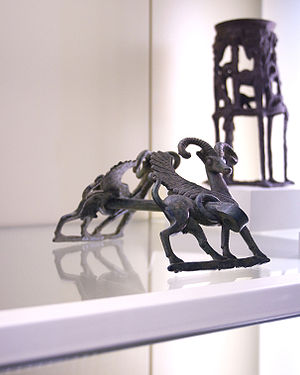 It is likely that the first domesticated horses were ridden with some type of bitless headgear made of sinew, leather, or rope.[4] Components of the earliest headgear may be difficult to determine, as the materials would not have held up over time. For this reason, no one can say with certainty which came first, the bitted or the bitless bridle.[4] There is evidence of the use of bits, located in two sites of the Botai, dated about 3500-3000 BC.[5] Nose rings were used on the equids portrayed on the Standard of Ur, circa 2600 BC - 2400 BC. To date, the earliest artistic evidence of use of some form of bitless bridle was found in illustrations of Synian horseman, dated approximately 1400 BC.[6]

The first bits were made of rope, bone, horn, or hard wood. Metal bits came into use between 1300 and 1200 BC, originally made of bronze.[7] In modern times, nickel was a favored material until about 1940, when it was largely replaced by stainless steel.[8] Copper, aurigan and sweet iron (cold rolled steel) are incorporated into some bits to encourage salivation in the mouth of the horse, which encourages a softer mouth and more relaxed jaw. Bits also can be made of other materials such as rubber or plastic, sometimes in combination with metals.[9]

Throughout history, the need for control of horses in warfare drove extensive innovation in bit design, producing a variety of prototypes and styles over the centuries, from Ancient Greece into modern day use.[10]

The bits of a double bridle, showing both a type of snaffle bit called a bradoon and a curb bit.

A bit consists of two basic components, the bit mouthpiece that goes inside the horse's mouth, and the bit rings of a snaffle bit or shanks of a curb bit, to which the bridle and reins attach.

All bits act with some combination of pressure and leverage, often in conjunction with pressure applied by other parts of the bridle such as the curb chain on the chin, noseband on the jaw and face, or pressure on the poll from the headstall.[11] Particular mouthpieces do not define the type of bit. It is the sidepieces and the leverage these rings or shanks use to act on a horse's mouth that determines whether a bit is in the curb or snaffle family, and has a great impact on the severity of the mouthpiece.

The mouthpiece of a horse's bit is the first factor most people think of when assessing the severity and action of the bit. Therefore, it is carefully considered when choosing a bit for a horse. Many mouthpieces are not allowed in certain competitions. Bit mouthpieces may be single jointed, double-jointed, "mullen" (a straight bar), or have an arched port in the center of varying height, with or without joints. Some have rollers, rings or small "keys" that the horse can move with its tongue. Mouthpieces may be smooth, wire-wrapped or otherwise roughened, or of twisted wire or metal.

Various types of metal or synthetic substances are used for bit mouthpieces, which may determine how much a horse salivates or otherwise tolerates a bit; a horse having a moist mouth is considered more relaxed and responsive. Commonly used metals include stainless steel and nickel alloys, which generally do not rust and have a neutral effect on salivation; sweet iron, aurigan and copper, which generally tend to encourage salivation, and aluminum, which is considered drying and is discouraged as a mouthpiece metal. Synthetic mouthpieces may be made with or without internal metal cable or bar reinforcement. Rubber bits are generally thicker than metal bits, but other types of synthetics such as plastics are also used. Plastic-coated bits are often the same size as metal bits, and some are flavored.

Often, bits with shanks that also have single- or double-jointed mouthpieces are incorrectly referred to as snaffles. Because of the presence of a shank, they are actually in the curb bit family. 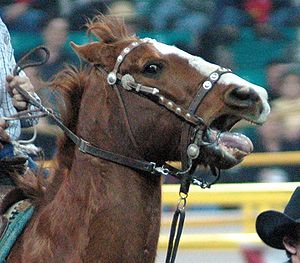 The mouthpiece of the bit does not rest on the teeth of the horse, but rather rests on the gums or "bars" of the horse's mouth in an interdental space behind the front incisors and in front of the back molars. When a horse is said to "grab the bit in its teeth" they actually mean that the horse tenses its lips and mouth against the bit to ignore the rider's commands (although some horses may actually learn to get the bit between their molars).[11]

Bits are designed to work by pressure, not pain. Depending on the style of bit, pressure can be brought to bear on the bars, tongue, and roof of the mouth, as well as the lips, chin groove and poll. Bits offer varying degrees of control and communication between rider and horse depending upon their design and on the skill of the rider. It is important that the style of bit is appropriate to the horse's needs and is fitted properly for it to function properly and be as comfortable as possible for the horse.[11]

In the wrong hands even the mildest bit can hurt the horse. Conversely, a very severe bit, in the right hands, can transmit extremely subtle, nuanced signals that cause no pain to the horse. Commands should be given with only the quietest movements of the hands, and most steering is done with the legs and seat. Thus, instead of pulling or jerking the horse's head to change direction by force, a skilled rider indicates the desired direction by tightening and loosening the grip on the reins. The calf of the leg is used to push the body of the horse in a certain direction while the other one is used as a pivot and to provide the correct amount of impulsion required to keep the horse moving. Likewise, when slowing or stopping, a rider sits deeper in the saddle and closes their hands on the reins, avoiding jerking on the horse or hauling back on the reins in a "heavy-handed" fashion. Change of position of the seat and the pressure of the rider's seat bones are also extremely useful for turning, speeding up and slowing down.

There are many factors in the bitting equation which must be considered to get a true estimate of the action and severity of a bit. Although some mouthpieces are marketed as "correction" (a euphemism for "severe") bits or "training" (implying a mild bit), the terms are relative. The bit always rests on the sensitive bars of a horse's mouth. A hard-handed rider can make even the mildest bit painful, and a skilled, light-handed rider can ride in a much harsher mouthpiece without damaging the mouth or causing any distress in the horse. Additionally, the shank or ring has a great impact on the action of the mouthpiece. Snaffles are generally considered the mildest, curbs and gags the harshest. It is difficult, therefore, to compare a harsher-type bit with a mild mouthpiece (such as a pelham with a rubber mullen mouth), and a milder-type bit with a harsher mouthpiece (like a thin snaffle with a slow twist). In general, however, the mouthpiece can have a marked difference on the severity. Snaffles with twisted wires are never considered mild, whereas a pelham with a low port could. 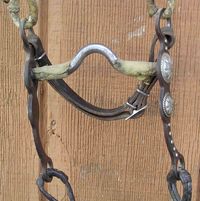 Bits that have shanks coming off the bit mouthpiece to create leverage that applies pressure to the poll, chin groove and mouth of the horse are in the category of curb bits. Most curb bit mouthpieces are solid without joints, ranging from a straight bar with a slight arch, called a "mullen" mouthpiece, through a "ported" bit that is slightly arched in the middle to provide tongue relief, to the full spade bit of the Vaquero style of western riding which combines both a straight bar and a very high "spoon" or "spade" extension that contacts the roof of the mouth. The length of the shank determines the degree of leverage put on the horse's head and mouth. Again, a bit with shanks and leverage is always a "curb" type bit, even when it has a jointed mouthpiece more commonly seen on a snaffle (such bits are sometimes—incorrectly—called "cowboy snaffles"). All shanked bits require the use of a curb chain or curb strap for proper action and safe use. 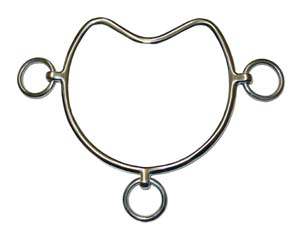 Some bits combine both direct pressure and leverage, the most common examples being the Pelham bit, which has shanks and rings allowing both direct and leverage pressure on a single bit and is ridden with four reins;[3] the Kimblewick or Kimberwicke, a hybrid bit that uses minimal leverage on a modified snaffle-type ring combined with a mouthpiece that is usually seen more often on curb bits, ridden with two reins;[13] and the double bridle, which places a curb and a snaffle bit simultaneously in the horse's mouth so that each may act independently of the other, ridden with four reins. Another bit that combines direct pressure and leverage in a unique manner is the Gag bit, a bit derived from the snaffle that, instead of having a rein attached to the mouthpiece, runs the rein through a set of rings that attach directly to the headstall, creating extra pressure on the lips and poll when applied. Usually used for correction of specific problems, the gag bit is generally illegal in the show ring[14] and racecourse.

Bits and the behavior of horses while wearing bits have made their way into popular culture outside of the horse world.