From Infogalactic: the planetary knowledge core
Jump to: navigation, search
For the genus of snails, see Bithynia (gastropod).

Bithynia (/bᵻˈθɪniə/; Greek Βιθυνία Bithynia) was an ancient region, kingdom and Roman province in the northwest of Asia Minor, adjoining the Propontis, the Thracian Bosporus and the Euxine Sea. It bordered on Mysia to the south-west, Paphlagonia to the north-east along the Pontic coast, and Phrygia to the south-east towards the interior of Asia Minor. Bithynia was an independent kingdom from 4th century BC. Its capital Nicomedia was rebuilt on the site of ancient Astacus in 264 BC by Nicomedes I of Bithynia. Bithynia fell to the Roman Republic in 74 BC, and became united with the Pontus region as the province of Bithynia et Pontus, in the 7th century incorporated into the Byzantine Opsikion theme. It became a border region to the Seljuk Empire in the 13th century, and was eventually conquered by the Ottoman Turks in the 1330s.

Several major cities sat on the fertile shores of the Propontis (which is now known as Sea of Marmara): Nicomedia, Chalcedon, Cius and Apamea. Bithynia also contained Nicaea, noted for being the birthplace of the Nicene Creed.

According to Strabo, Bithynia was bounded on the east by the river Sangarius (modern Sakarya river), but the more commonly received division extended it to the Parthenius, which river separated it from Paphlagonia, thus comprising the district inhabited by the Mariandyni. On the west and southwest it was separated from Mysia by the river Rhyndacus and on the south it adjoined Phrygia and Galatia.

It is occupied by mountains and forests, but has valleys and coastal districts of great fertility. The most important mountain range is the (so-called) "Mysian" Olympus (8000 ft., 2500 m), which towers above Bursa and is clearly visible as far away as Istanbul (70 miles, 113 km). Its summits are covered with snow for a great part of the year.

East of this the range extends for more than 100 miles (160 km), from the Sakarya to Paphlagonia. Both of these ranges are part of the border of mountains which bound the great tableland of Anatolia, Turkey. The broad tract which projects towards the west as far as the shores of the Bosporus, though hilly and covered with forests — the Turkish Ağaç Denizi, or "The Ocean of Trees" — is not traversed by any mountain chain. The west coast is indented by two deep inlets, the northernmost, the Gulf of İzmit (ancient Gulf of Astacus), penetrating between 40 and 50 miles (65–80 km) into the interior as far as İzmit (ancient Nicomedia), separated by an isthmus of only about 25 miles (40 km) from the Black Sea; and the Gulf of Mudanya or Gemlik (Gulf of Cius), about 25 miles (40 km) long. At its extremity is situated the small town of Gemlik (ancient Cius) at the mouth of a valley, communicating with the lake of Iznik, on which was situated Nicaea.

The principal rivers are the Sakarya which traverses the province from down to north; the Rhyndacus, which separated it from Mysia; and the Billaeus (Filiyas), which rises in the Aladağ, about 50 miles (80 km) from the sea, and after flowing by modern Bolu (ancient Bithynion-Claudiopolis) falls into the Euxine, close to the ruins of the ancient Tium, about 40 miles (64 km) northeast of Heraclea Pontica (the modern Karadeniz Ereğli), having a course of more than 100 miles (160 km). The Parthenius (modern Bartın), the eastern boundary of the province, is a much less considerable stream.

The valleys towards the Black Sea abound in fruit trees of all kinds, such as oranges, while the valley of the Sangarius and the plains near Bursa and Iznik (Nicaea) are fertile and well cultivated. Extensive plantations of mulberry trees supply the silk for which Bursa has long been celebrated, and which is manufactured there on a large scale. 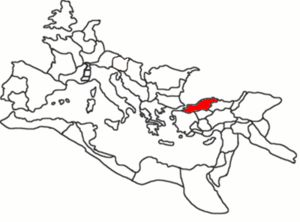 Bithynia as a province of the Roman Empire, 120 AD 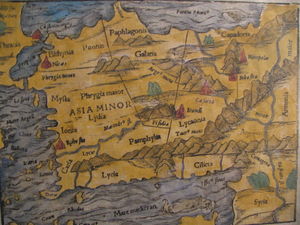 Bithynia is named for the Thracian tribe of the Bithyni, mentioned by Herodotus (VII.75) alongside the Thyni. The "Thraco-Phrygian" migration from the Balkans to Asia Minor would have taken place at some point following the Bronze Age collapse or during the early Iron Age. The Thyni and Bithyn appear to have settled simultaneously in the adjoining parts of Asia, where they expelled or subdued the Mysians, Caucones and other minor tribes, the Mariandyni maintaining themselves in the northeast. Herodotus mentions the Thyni and Bithyni as settling side by side. No trace of their original language has been preserved, but Herodotus describes them as related to the tribes of Thracian extraction like the Phrygians and Armenians, whose languages form part of the Paleo-Balkan group.

The Bithynians were incorporated by king Croesus within the Lydian monarchy, with which they fell under the dominion of Persia (546 BC), and were included in the satrapy of Phrygia, which comprised all the countries up to the Hellespont and Bosporus.

Even before the conquest by Alexander the Bithynians appear to have asserted their independence, and successfully maintained it under two native princes, Bas and Zipoites, the latter of whom assumed the title of king (basileus) in 297 BC. His son and successor, Nicomedes I, founded Nicomedia, which soon rose to great prosperity, and during his long reign (c. 278 – c. 255 BC), as well as those of his successors, Prusias I, Prusias II and Nicomedes II (149 – 91 BC), the kingdom of Bithynia held a considerable place among the minor monarchies of Anatolia. But the last king, Nicomedes IV, was unable to maintain himself against Mithridates VI of Pontus, and, after being restored to his throne by the Roman Senate, he bequeathed his kingdom by will to the Roman republic (74 BC). The coinage of these kings show their regal portraits, which tend to be engraved in an extremely accomplished Hellenistic style.[1]

As a Roman province, the boundaries of Bithynia frequently varied, and it was commonly united for administrative purposes with the province of Pontus. This was the state of things in the time of Trajan, when Pliny the Younger was appointed governor of the combined provinces (109/110 – 111/112), a circumstance to which historians are indebted for valuable information concerning the Roman provincial administration. Under the Byzantine Empire Bithynia was again divided into two provinces, separated by the Sangarius, to the west of which the name of Bithynia was restricted.

Bithynia appears to have attracted so much attention because of its roads and its strategic position between the frontiers of the Danube in the north and the Euphrates in the southeast. For securing communications with the eastern provinces, the monumental Bridge across the river Sangarius was constructed around 562 AD. Troops frequently wintered at Nicomedia.

The most important cities were Nicomedia, founded by Nicomedes, and Nicaea. The two had a long rivalry with one another over which city held the rank of capital. At a much earlier period the Greeks had established on the coast the colonies of Cius (modern Gemlik); Chalcedon (modern Kadıköy), at the entrance of the Bosporus, nearly opposite Byzantium (modern Istanbul) and Heraclea Pontica (modern Karadeniz Ereğli), on the Euxine, about 120 miles (190 km) east of the Bosporus.

Ancient episcopal sees of the Roman province of Bithynia Prima listed in the Annuario Pontificio as titular sees:[2]

Ancient episcopal sees of the Roman province of Bithynia Secunda listed in the Annuario Pontificio as titular sees:[2]

Lua error in Module:Coordinates at line 668: callParserFunction: function "#coordinates" was not found.bg:Витиния (царство)