The Bizerte Crisis (French: Crise de Bizerte, Arabic: أحداث بنزرت‎‎ ʾAḥdāth Bīzart) occurred in July 1961 when Tunisia imposed a blockade on the French naval base at Bizerte, Tunisia, hoping to force its evacuation. The crisis culminated in a three-day battle between French and Tunisian forces that left some 630 Tunisians and 24 French dead and eventually led to France ceding the city and naval base to Tunisia in 1963. 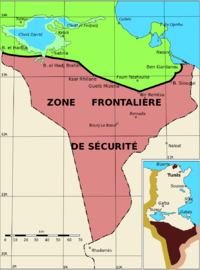 After Tunisia gained independence from France in 1956, France remained in control of the city and its naval base, a strategic port on the Mediterranean, which played an important part in French operations during the Algerian War. France had promised to negotiate the future of the base, but had so far refused to remove it. Tunisia was further infuriated upon learning that France planned to expand the airbase.

In 1961, Tunisian forces surrounded and blockaded the naval base in hopes of forcing France to abandon its last holdings in the country. After Tunisia warned France against any violations of Tunisian airspace, the French defiantly sent a helicopter. Tunisian troops responded by firing warning shots. In response to the blockade, 800 French paratroopers were sent in. As the paratroopers landed on the airfield, Tunisian troops sprayed them with machine gun fire. In response, French jets armed with rockets, and 105mm howitzers blasted the Tunisian roadblocks, destroying them. French tanks and armored cars then rolled into Tunisian territory, and fired into the town of Menzel-Bourguiba, killing 27 soldiers and civilians. 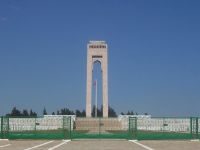 The following day, the French launched a full-scale invasion of the town of Bizerte. The Tunisians' few artillery posts were destroyed by rockets fired by French planes. Tanks and paratroopers penetrated into the city from the south, while marines stormed the harbor from landing craft. Three French cruisers were positioned offshore. Tunisian soldiers, paramilitaries,[1] and hastily organised civilian volunteers engaged the French in heavy street fighting, but were forced back by vastly superior French forces. The French overran the town on July 23, 1961.

The French military finally abandoned Bizerte on 15 October 1963, after the conclusion of the Algerian War.