From Infogalactic: the planetary knowledge core
Jump to: navigation, search
Not to be confused with Blackstone Group. For other uses, see Black Rock (disambiguation).

BlackRock, Inc. is an American global investment management megacorporation based in New York City. Founded in 1988, initially as a risk management and fixed income institutional asset manager, BlackRock is by far the world's largest asset manager with over $4.5 trillion in assets under management.[2] 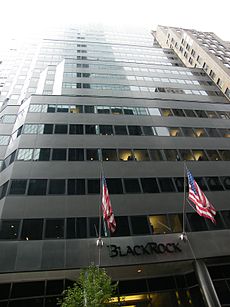 Fink, Kapito, Golub and Novick had worked together at First Boston, where Fink and his team were pioneers in the mortgage-backed securities market in the United States. During Fink's tenure, he had lost $100 Million as head of First Boston. That experience was the motivation to develop what he and the others considered to be excellent risk management and fiduciary.

Initially, Fink sought funding (for initial operating capital) from Pete Peterson of the The Blackstone Group L.P. who believed in Fink's vision of a firm devoted to risk management. Peterson called it Blackstone Financial Management.

In 1992, due to internal confusion, the decision was made to change their name from Blackstone Financial Management to BlackRock. In 1995, Blackstone Group's Stephen A. Schwarzman and Fink had an internal dispute over equity. Fink wanted to share equity with his employees. Schwarzman did not. They agreed to part ways, so the BlackRock partners, (Sue Wagner) orchestrated a deal with PNC Financial Services Group.

In 1995, BlackRock closed the deal with PNC Financial Services Group, while continuing to be managed independently. In 1998, PNC’s equity, liquidity, and mutual fund activities were merged into BlackRock. BlackRock went public in 1999 at $14 a share.[6]

The U.S. government contracted with BlackRock to help clean up after the financial meltdown of 2008. According to Vanity Fair, the financial establishment in Washington and on Wall Street believed BlackRock was the best choice for the job.[10]

In 2010, Ralph Schlosstein, the CEO of Evercore Partners and a BlackRock founder, called BlackRock "the most influential financial institution in the world".[11]

At the end of 2014, the Sovereign Wealth Fund Institute reported that 65% of Blackrock's assets under management were made up of institutional investors.[13]

In December 2014 a BlackRock managing director in London was banned by the British Financial Conduct Authority for "not being a fit and proper" person, because he paid £43,000 to avoid prosecution for dodging train fares. BlackRock said: "Jonathan Burrows left BlackRock earlier this year. What he admitted to the FCA is totally contrary to our values and principles."[14]

On August 26, 2015, BlackRock entered into a definitive agreement to acquire FutureAdvisor,[15] a digital wealth management provider with reported assets under management of $600 million.[16]

BlackRock announced in November 2015 that they would wind down the BlackRock Global Ascent hedge fund after losses.[17]

BlackRock differentiates itself from other asset managers by claiming its risk management is not separate. Risk management is the foundation and cornerstone of the firm's entire platform.[18] Aladdin keeps track of 30,000 investment portfolios, including BlackRock's own along with those of competitors, banks, pension funds, and insurers. According to The Economist, the platform monitors almost 7 percent of the world’s $225 trillion of financial assets.[18]

BlackRock Solutions was retained by the U. S. Treasury Department in May 2009[19] to manage the toxic mortgage assets (i.e. to analyze, unwind, and price) that were owned by Bear Stearns, AIG, Inc., Freddie Mac, Morgan Stanley, and other financial firms that were affected in the 2008 financial crisis.

BlackRock is a global firm with 22 investment centers, 70 offices in 30 countries and clients in 100 countries.[20]