This article is about the most famous Black Dragon Pool, the one in Lijiang. The term Heilongtan may also refer to several other places in China, including a park in northern Kunming. 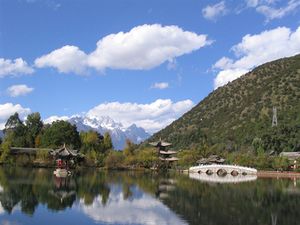 Black Dragon Pool (simplified Chinese: 黑龙潭; traditional Chinese: 黑龍潭; pinyin: Hēilóngtán) is a famous pond in the scenic Jade Spring Park (Yu Quan Gong Yuan) located at the foot of Elephant Hill, a short walk north of the Old Town of Lijiang in Yunnan province, China. It was built in 1737 during the Qing dynasty and offers a spectacular view of the region's tallest mountain, Jade Dragon Snow Mountain, over its white marble bridge.

In the past, the pool itself has sometimes been dry, spoiling the famous view. In 2010, however, the park was declared a water conservation area by the local government. As of 2014, the pool stands full of water, its former beauty restored.